The San Diego Chargers are a team that appears to be lost, confused and put in positions to fail based on the tape. Injuries have hampered San Diego’s offensive ability to reach its full potential and the team is limping into Kansas City for the final quarter of the season.

Kansas City had a solid game plan in San Diego but had some execution errors at times during the game. This Sunday is an opportunity for the Chiefs to show their growth over that three-week span.

Here are the key points Kansas City can attack Sunday to come out with a comfortable victory. 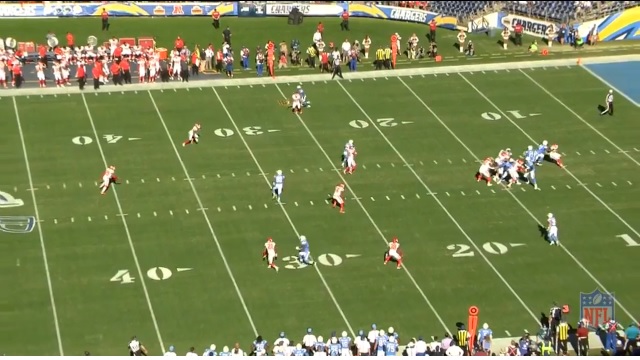 Chargers quarterback Philip Rivers has lacked time in the pocket to make the deep throws down field. He has been forced to throw quick slants, crossers, outs, digs or skinny post to take advantage of the coverage and avoid hits. The offensive line is not giving Rivers much time to survey the field and attack the explosive plays down field. The edge rushers are putting pressure on Rivers quickly from nine-tech positions and the defensive tackles are collapsing the pocket by the time he completes his drop out of three tech spots.

It would work to the Chiefs’ advantage to sit on the intermediate routes in zone coverage. That would help limit the yards after catch and force Rivers to hold onto the ball at times and let the pass rush get to him. 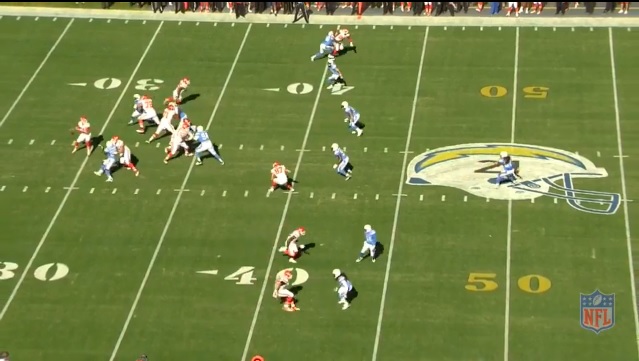 The Chargers defense struggles with being spaced out. It starts creative holes in their defense very quickly and gives multiple weaknesses to exploit. San Diego is overaggressive in their pursuit and becomes very week against the run when they are stretched out with four and five wide.

There are opportunities to utilize zone reads, slants, picks and option routes to keep the chains moving.

3. Utilize the bunch and misdirection screens 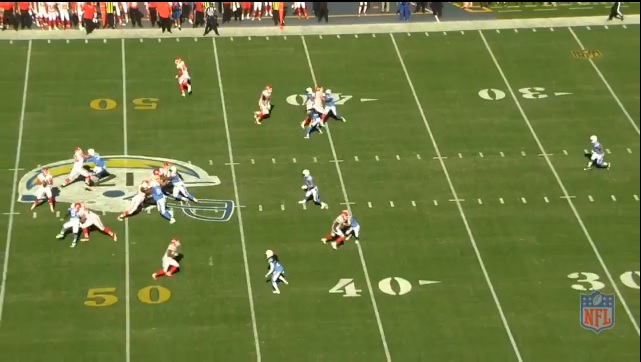 The Bunch formation is tough for the Chargers to cover effectively. They will put three defenders in coverage on the bunch but two guys may take the same receiver and they struggle with redirecting their coverage if it is not route combination they have seen on tape. 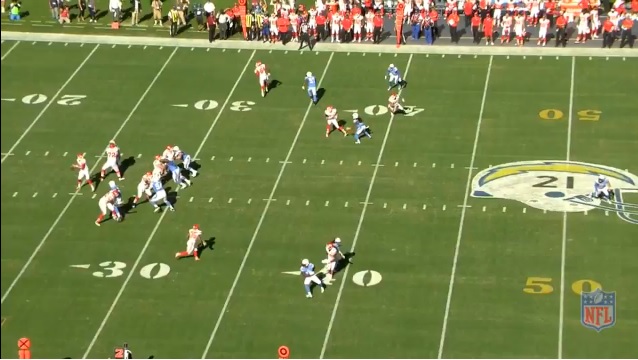 Charcandrick West had his big catch out of the bunch formation on the opposite side with an angle route as shown above. 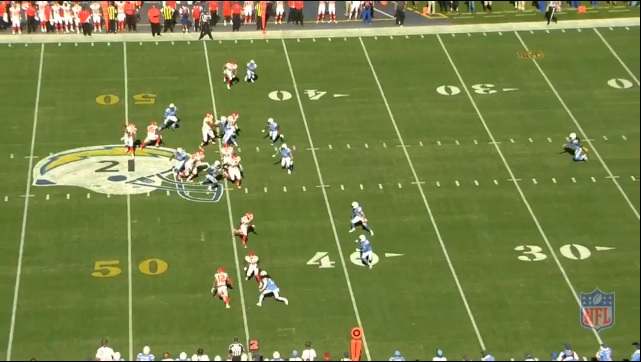 The Chargers were also very aggressive in attacking the wide receiver screens out of the trips or bunch formations. Kansas City can use that to their advantage by having some delayed runs and backside routes to take advantage of the middle they vacated. 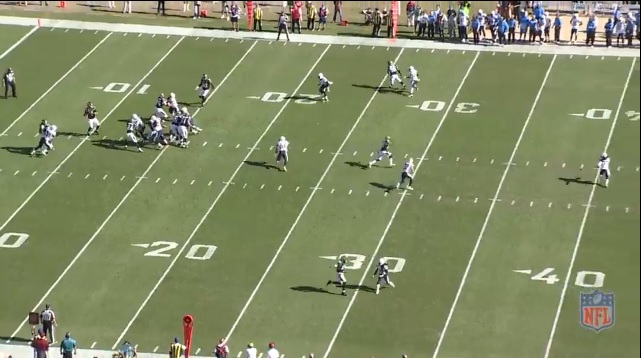 The Chargers struggle with the intermediate crossing route over the middle off play-action pass. They leave a lot of space in between the second and third levels of their coverage once they are held on the play-action pass. There are opportunities for big chunks of yards off these plays. 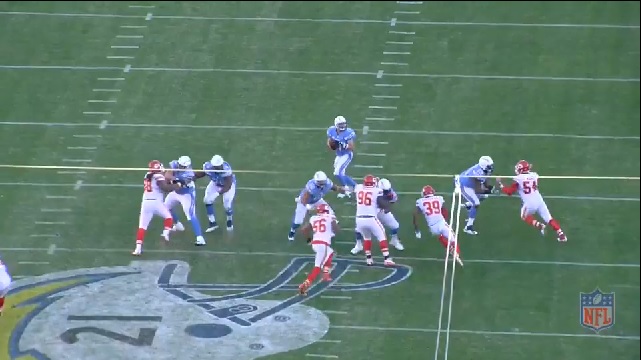 At some point Rivers will grow accustom to the timing of the Chiefs pass rush and zone coverage drops. Once that happens the Chiefs need to bring some twist and stunts. The Chargers struggled picking those up in their B gaps, which is the space between the guards and tackles.

6. Keep an eye on the backs 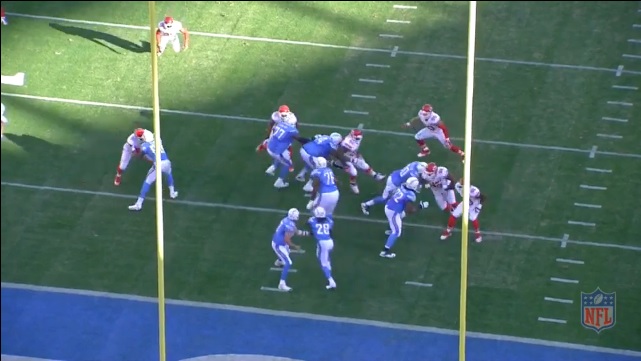 Gordon has started to become more involved in their passing game to supplement his struggles in the run game. Gordon will run some check and releases along with routes into the flats. He has also had a couple of good runs out of the zone reads in shotgun formation. Woodhead is also a threat on quick option routes.

7. Finish them with pulling power 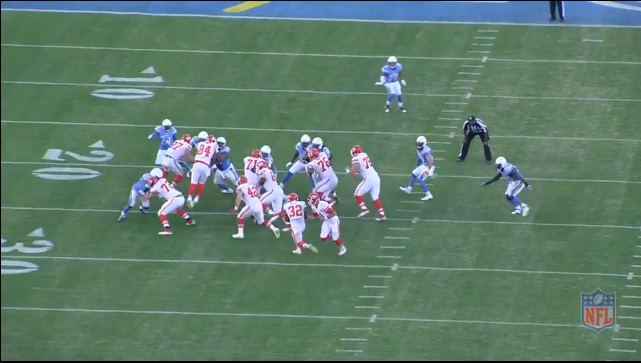 The Chargers are a defense that attacks keys they see in diagnosing a play. So if they see a false key, they are already out of a position and will give up an explosive play. When they Chargers see a key like an offensive lineman pulling their linebackers and safeties will sprint in their pursuit to beat the linemen to the outside. 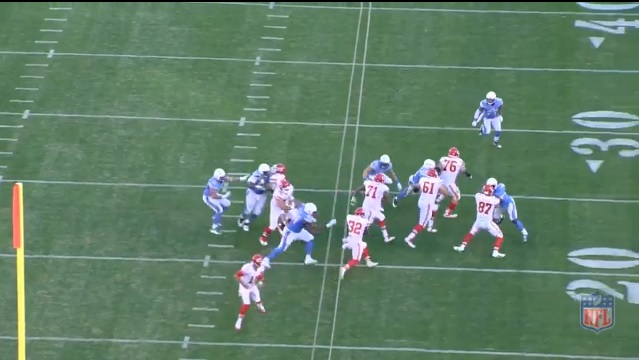 That leads to two options: the lineman are going to seal them and gives the back a clear path or the cutback lanes will gash them until they stop over pursuing.

If the Chiefs line up in power formations with two and three tight ends they can exploit the personnel San Diego leaves on the field and run out the clock for their eighth victory of the season.