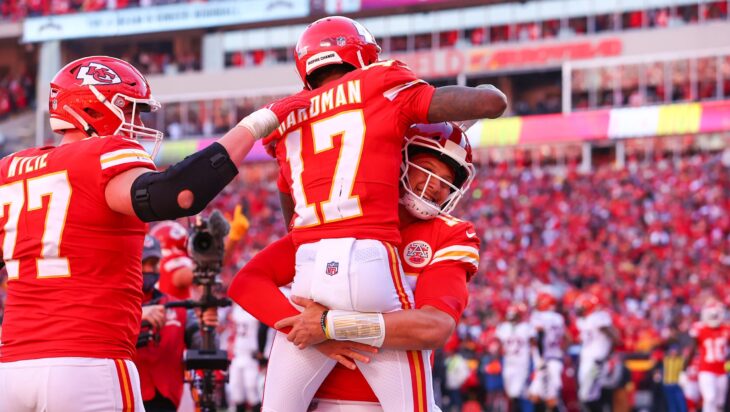 KANSAS CITY, Mo. – Mecole Hardman doesn’t need to be reminded that he’s entering the final year of his rookie contract, the proverbial “contract year” that can make or break an NFL player. He’s fully aware.

“Yeah, definitely want to have one of my best seasons for sure, especially in the contract year,” Hardman said Monday as the Chiefs formally began their offseason training program. “That’s definitely a thought that goes through your head.”

Look no further than this year’s free agency frenzy for evidence of the power of the contract year. Arizona wide receiver Christian Kirk was a second-round pick for Arizona in 2018. He earned roughly $7.5 million during his first four seasons in the league and entered last season with a career-high of 68 catches for 709 yards in 2019.

After delivering 77 catches for 982 yards and five touchdowns in 2021, Kirk landed a four-year, $70 million contract in Jacksonville with $37 million guaranteed.

A similar opportunity lies within the reach of Hardman. A second-round selection for the Chiefs in 2010, Hardman will have earned just more than $8 million through his first four NFL seasons. He’s coming off his best campaign yet, hauling in 59 catches for 693 yards, and he’s no longer running in the shadow of former teammate Tyreek Hill.

In head coach Andy Reid’s experience, players in Hardman’s position don’t need to be reminded about the prize dangling in front of them. “I’d tell you in that situation, money talks, right,” he said.

“They’re all in there going full speed. That’s what I’ve seen. I don’t have to talk about it, they know. These guys are well-educated, and they know what’s at stake. We’ve been fortunate that the guys have really been in attack mode when they get into those situations.”

Hardman wants to put himself in that situation. After the team’s loss to Cincinnati in the AFC Championship game, Hardman went home to recover, rest and make a plan for the offseason. His goal for 2022 is simple – “Be better than I was last year, honestly.” He focused his early work on improving his strength, speed and explosiveness.

“How I kind of go through the offseason, the first part I just want to focus on those three things, not really focused on football at all,” Hardman explained. “I don’t want to think about football because you’ve done it for like six, seven months.”

As organized team activities (OTA) approach in May, Hardman begins refining his releases, top of route techniques and other skills.

“You don’t want to try to kill yourself too fast,” Hardman said. “I think rest is important. That’s kind of how I go, making sure I take care of my body but also trying to just fine-tune the little things, the basic things, the fundamentals of my game and then just slowly progressing into OTAs and training camp.”

Normally in mid-April, he would return to Kansas City for the beginning of phase one of the offseason program. But this year Reid adopted a new philosophy this offseason, in part inspired by pandemic protocols.

“In Phase I, you’re able to meet with the players and then they can workout,” Reid said. “No coaches supervising any football activities, so we’re going to meet with them virtually.”

While some players have reported to Kansas City and are working out with the training staff, most of the team’s skill players are making the trek to Fort Worth, Texas, to work with Patrick Mahomes at the ATHLETE Performance Enhancement Center. In the past, if quarterbacks and receivers wanted to work together during phase one, they would have to do so at an off-site location, such as a local high school field. Now Mahomes and his teammates can work in private at a high-end training facility in warmer Texas weather while meeting with coaches via Zoom.

Some fans on social media reacted harshly toward Hardman for not appearing during the first week of workouts. Mahomes says the situation “got overblown a little bit in a sense.”

“He’s always put in the time and has waited for his opportunities,” Mahomes said. “Every time he’s in there and he has his opportunity, he’s going 100 miles per hour as hard as he can. You respect guys like that and you’re happy that he’ll have an even bigger chance and a bigger opportunity this year and I expect big things from him.”

Hardman saw the criticism as well and felt it was blown out of proportion.

“I’ve been working out the whole offseason, not to mention when like when we go to OTAs, training camp and have four months with Pat to throw,” Hardman said. “I think honestly I think I understand that people have individual lives as well. Know what I’m saying? I can’t be on Pat’s ass all day, you know what I’m saying.”

This is the third spring in a row in which Hardman enters offseason workouts with high expectations. It’s not just the contract year, however, that raises the stakes this time around. There are no COVID-19 restrictions limiting Hardman’s offseason work with the team, and the path toward more opportunities is wide open with Hill gone from the lineup.

“He’s coming off a good year,” Reid said. “He’s got to continue to grow here over the next couple years here. Mecole has the speed like a Tyreek had, different player, but like what Tyreek had. He gives you a nice skill set there with the speed and quickness and ability to run when the ball is in his hands. He’s a very aggressive runner when the ball is in his hands. You find ways to do that in a variety of different ways.”

The key to Hardman’s success, Mahomes argues, is simply being himself.

“He doesn’t have to be Tyreek Hill,” Mahomes said. “He has to be Mecole Hardman, and I think Mecole Hardman can be a great player in this offense. He’s made a Pro Bowl already and I think he can keep getting better and better. Everybody puts out there he’s got to replace Tyreek. I think he can be his own player, a Pro Bowler and a great player in this offense as well.”

Hardman understands everything he does this offseason and during the 2022 campaign will be scrutinized under a magnifying glass.

“A one in a generation type of player has left the team, so you know somebody’s got to step up and fill the role or multiple guys have got to step up and try to fill that void,” he said. “But for myself personally, man, I just want to be better than I was last year. Get better as an overall receiver and kind of establish my name a little bit more. Catching the ball, running routes, yards after the catch, everything, trying to improve on it and just get better.”

Yet in the end, the contract year is still looming on the horizon, and Hardman realizes he must avoid falling into a trap.

“You can mess up looking too far into the future and thinking like, ‘I want to have this, I want to have that,’ but more so just taking one day at a time and let everything unfold like it’s supposed to.

“But it’s definitely something on my mind and having a big year, for sure.”