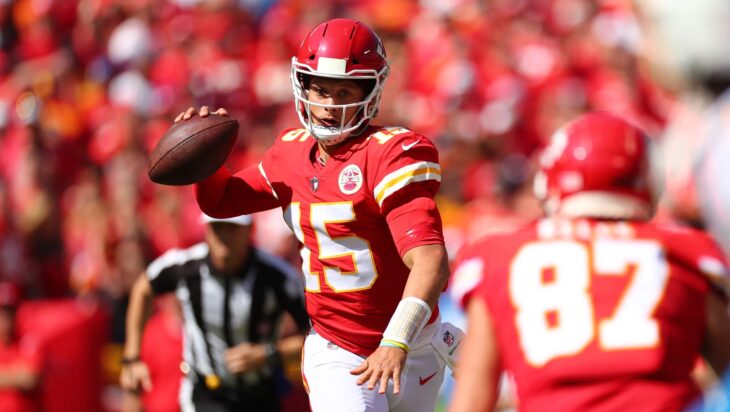 KANSAS CITY, Mo. – An eerie silence filled the hallway outside the Chiefs’ locker room following the team’s 30-24 loss to the Chargers. The Chiefs (1-2) find themselves looking up from the bottom of the AFC West, a position they haven’t been since Week 6 of the 2015 season.

But it’s not a position of panic for quarterback Patrick Mahomes and his teammates.

“Obviously everybody’s – I’m not going to say down – but everybody’s not happy with how we played,” Mahomes said. “When you take a loss to a division opponent at home, it’s not usually a good thing, we haven’t done a lot of that in my time here.”

The Chiefs offense put up some gaudy numbers on Sunday. The club’s 33 first downs are tied for fourth-best in club history, and Clyde Edwards-Helaire and Travis Kelce teamed up to give the team a 100-yard rusher and 100-yard receiver respectively. The Chiefs outgained the Charger 437 yards to 352.

“We were moving the ball the way we wanted to and we got ourselves back in the game and gave ourselves a chance at the end,” Mahomes said.

But the ugly blemish under turnovers – four turnovers without a single takeaway – ultimately proved the team’s undoing.

Dave Toub, the team’s assistant head coach and special teams coordinator, filled in for Andy Reid during the team’s postgame press conference after the head coach left the stadium via an ambulance for an examination. Toub recounted Reid’s postgame message to the team.

“You can’t overcome the turnovers,” Toub said. “You’ve got to quit the turnovers. And it’s not about effort—our guys were playing hard, that’s not it at all. We’ve just got to clean it up. We’ve got to clean up our football, and that’s where he left it.”

Edwards-Helaire saw 264 touches in his NFL career before his first fumble last week against the Ravens. It took only six touches before he coughed up his second fumble against the Chargers. Then there’s Tyreek Hill, who fumbled just once in the past three seasons in 275 touches before losing the ball on a big hit by Chargers cornerback Tevaughn Campbell.

Those out-of-character turnovers baffled Mahomes after the game.

“The run that Clyde had, he makes a guy miss, makes a great run, got spun weird, the ball comes out,” Mahomes said. “I throw the ball to Tyreek (Hill) who never fumbles, and he gets the ball perfectly hit at the perfect time to fumble. So, I mean it’s not like we weren’t doing things the right way like we always do, we didn’t execute whenever it came down to it.”

The much-maligned Chiefs defense also had good moments on Sunday, ending its stretch of allowing touchdowns in the red zone after 11 straight scores by opponents marching inside the 20-yard line. But the Chargers marched down the field for the game-winning score on their fifth trip into the red zone of the day.

The woes near the goal line are particularly frustrating to linebacker Anthony Hitchens after the club made red-zone defense a top priority throughout the offseason, training camp and the preseason.

“We have to get it right,” Hitchens said. “I am one of the leaders on this defense, so I will be the first one to say, I messed up. If I’m wrong, I’m wrong and I’m just trying to get it right so we can win.”

After allowing an average of 202 yards on the ground the last two games, the Chiefs limited the Chargers to just 77 yards rushing.

“We stopped the run pretty well today without using the eighth defender,” Hitchens said. “We had a lot of seven-man boxes in stopping the run, I think that was a plus. I think they came out wanting to run the ball, and we talked them out of that very early.”

But it the result still wasn’t good enough for Hitchens.

“At the end of the day, it’s about winning and losing,” Hitchens said. “Points matter but it really doesn’t. We gave up too many points today and lost. That’s how we look at it. It’s either did you win or lose and we lost.”

Toub conceded the Chiefs are at a crossroads after the loss. His years of experience with Reid and his nine seasons in Kansas City tell him better days are ahead.

“We have a long season ahead of us,” Mahomes said. “It looks real dim right now, but if you can find a way to get better from this and find a way to win these games at end of games, we’ll be where we want to at the end of the season.”