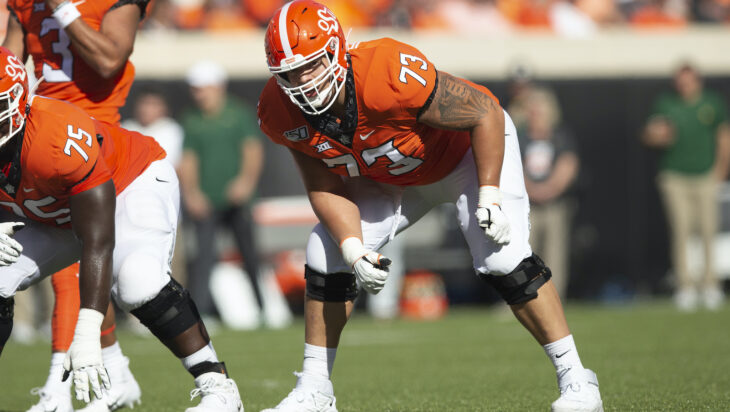 No NFL player draft unfolds the same way, and that’s one reason why Chiefs Digest is conducting a series of situational scenarios for the 2021 draft to see how things might play out for general manager Brett Veach and the Chiefs.

The scenario for this draft is focusing on the left tackle position. That remains one of the biggest needs for the Chiefs, and the goal here is coming out with an upgrade at left tackle, then focusing on the best players available while addressing short- and long-term team needs.

The top priority entering this scenario was landing a left tackle, and the consensus No. 4 left tackle on the board falls to the Chiefs at the end of the first round.

There’s a lot to love about Jenkins. The 6-foot-5, 317-pound native of Topeka, Kan. can manhandle defenders, which fits the new mentality the Chiefs want to build on their offensive line. He also sports tremendous versatility, playing four different positions along the offensive line with 26 starts at right tackle and seven at left tackle. Even if Jenkins doesn’t blossom into a top-end left tackle, even low expectations project him as more than a capable starter on the interior.

A right hip injury prompted Jenkins to opt out of the remainder of the 2020 season in November, but assuming he clears medical checks Jenkins ranks among the top tackles in the draft. The buzz phrase of the 2021 draft is “arm length,” and Jenkins come in below average at 33 1/2 inches. Mitchell Schwartz measured in at 33 1/2 also, so that should ease any concerns about Jenkins.

Only four tackles went off the board in the first 30 selections: Oregon’s Penei Sewell, Rashawn Slater, Alabama’s Alex Leatherwood and Christian Darrisaw. The latter fell to No. 29, a tempting opportunity to move up if Veach is interested. In a scenario such as this, the Chiefs could easily acquire any tackle in the draft they want outside of Sewell or Slater. The probability of this scenario playing out appears low, however, but Veach must prepare for the eventuality to make a move if the opportunity presents itself.

This would make two straight drafts for the Chiefs going linebacker in the second round, and Bolton would be an ideal pairing with Willie Gay in the Kansas City defense.

Bolton earned first-team All-SEC as a sophomore in 2019 with 107 total tackles, including nine for a loss. He also broke up 10 passes with two interceptions.

Despite the presence of Gay, linebacker remains a secondary need for the Chiefs, and the Chiefs have shown interest in Bolton. Would be hard for Veach to pass up great value late in the second round.

Another value selection here at a position of need for the Chiefs. Turner served as a team captain for the Cougars in 2020 and tallied nine sacks and 18 1/2 tackles for a loss in 17 games over the past two seasons. The 6-foot-5, 270-pounder sports tremendous length (84-inch wingspan) and fits the Chiefs’ mold for a defensive lineman. While his best production came as an edge defender at Houston, Turner can play multiple positions and kick inside when needed in Steve Spagnuolo’s multiple defensive fronts.

The departure of Sammy Watkins leaves the Chiefs in need of a possession receiver who provides a big target, and the 6-foot-3, 211-pound Williams fits the bill. He led the Tigers in receiving yards in each of the past two seasons and isn’t afraid to get physical as a blocker when needed.

The opportunity to double-down on tackles is too strong to resist with Forsythe falling late in the fourth round. He started at right tackle early in his college career with the Gators before moving to left tackle the past two seasons. Big frame at 6-foot-8, 307 pounds and is one of the few tackles in this draft with the arm length (34 3/8 inches) desired in the NFL. Still needs polish but could block for Mahomes on day one if needed.

Why double down on the offensive line when you can triple down? If finding Forsythe in the fourth round was surprising, it’s stunning to find in the fifth round Christensen, who some have tagged as a second-round talent. He might project better at guard due to his size (6-foot-5, 302 pounds, 32 1/4-inch arms) but that’s fine for Kansas City. Jenkins, Forsythe and Christensen along with Lucas Niang could all find a home on the Chiefs offensive line by 2022.

Veach loves length and production from college cornerbacks, and Graham offers plenty of both. He plays larger than his 5-foot-10 size thanks to a 74 5/8-inch wingspan and broke up 40 passes along with eight interceptions in 40 games with 39 starts for the Ducks.

Davidson might slip through the draft as a priority free agent but the Chiefs shouldn’t miss out on the opportunity to add a high-upside tight end option from their own backyard. Ideal size at 6-foot-6, 245 pounds, Davidson caught 40 passes for 894 yards and 15 touchdowns in 2019 as a Division II first team All-American for the Mules.

An offensive line-heavy draft but that fits with the Chiefs’ desire to better protect Patrick Mahomes. If offensive linemen fall and value is there, Veach should take advantage. Bolton and Davidson are both local names to watch for the Chiefs.

This mock draft scenario was a perfect storm for the Chiefs in terms of talent dropping below their value. I doubt Jenkins will fall to No. 31, and Christensen certainly seems unlikely to fall lower than the third round. But one reason why NFL personnel groups run through this scenarios is to prepare for any eventuality.

FanSpeak.com has been around for a bit and gives you many choices. You have to pay to upgrade if you want to make trades, which some other simulators offer for free. FanSpeak offers an impressive list of features if you’re willing to upgrade, including the opportunity to trade players in addition to picks.