KANSAS CITY, Mo. — The Chiefs received more than a little help in building a halftime lead against the Jacksonville Jaguars, with the Jaguars helping to dig themselves into hole in the first half. 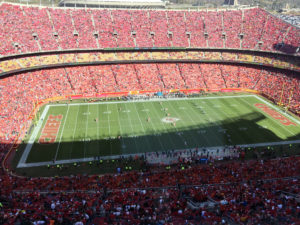 The Jaguars turned the ball over three times on a fumble,an  interception and once on downs. The Jaguars also prevented an opportunity for a turnover of their own. Cornerback Prince Amukamara had a fellow defender knock a sure interception out of his hands on a Nick Foles pass overthrown to Albert Wilson.

Wilson later hooked up with Foles on a perfectly throw post route for a 23-yard touchdown catch to make it 7-0. A fumble by punt returner Bryan Walters forced by hits from Daniel Sorensen and D.J. Alexander setup the the short field for the score.

Foles struggled after his first pass of the game for a 23-yard gain to tight end Travis Kelce. Foles finished a lackluster first half 9-of-17 passing for 93 yards and a touchdown.

Charcandrick West led the Chiefs in rushing with 22 yards on seven carries. Travis Kelce led all receivers with 44 yards on four catches.

Wide receiver Jeremy Maclin is questionable to return with a recurrence of the sore groin issue that slowed him in practice the past week. Defensive lineman Chris Jones left the game with an apparently ankle injury but later returned.

Keys to the second half for the Chiefs:

Tighten up against the run

The Jaguars placed a renewed emphasis on this week, and so far the plan is working. Jacksonville picked up 132 yards rushing in the first half, led by Chris Ivory with 83 yards on 10 carries. The Jaguars’ season-high for rushing yards in a game: 136 versus Indianapolis in week four.

Establish their own run game

The running back crops remains depleted with just West and Knile Davis on duty, but Chiefs need to run the ball to run the clock, prevent turnovers and finish the game. The Chiefs play their best when running the ball, and so far the run has been left wanting. The Chiefs have just 33 yards rushing in the first half.

Don’t get to cute

No need for double reverses, wide receiver passes or Hungry Pig Right against the hapless Jaguars. Chiefs just need to finish out a win without any gadgetry or trickery.