KANSAS CITY, Mo. — The bye week proved therapeutic for the Kansas City Chiefs, who find themselves with a relatively healthy roster and good news on All-Pro linebacker Justin Houston as they prepare to visit the Oakland Raiders Sunday. 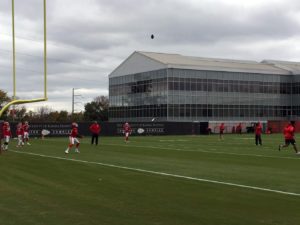 Houston remains on the PUP list through at least Sunday. Houston can return to practice as early as next week, and can workout with the team for up 21 days before returning to the active roster.

The team did not list running back Jamaal Charles on Wednesday’s practice report with an injury designation, giving an indication the team considers him back to full form in his recovery from last season’s knee injury.

Also fully participating in practice Wednesday was running back Knile Davis, who was evaluated for a concussion during the week four game at Pittsburgh. Also full participants in practice were corner back Phillip Gaines, offensive lineman Jah Reid and running back Charcandrick West.

Oakland running back Latavius Murray remained out of practice for the Raiders. The Raiders held him out of Sunday’s game against San Diego with a toe injury. Coach Jack Del Rio told reporter Monday he hoped Murray could play against the Chiefs.

Wednesday’s injury report as released by the Chiefs: