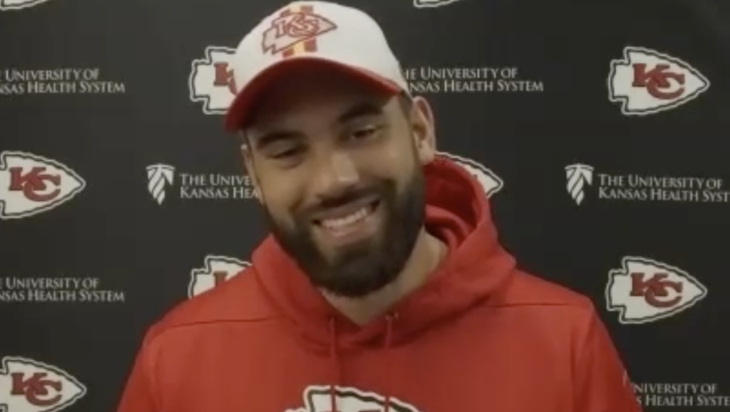 Sundays last fall and winter proved a day of respite for Laurent Duvernay-Tardif during a season away from football, an opportunity for a moment of fun while he fought on the front lines of COVID-19 pandemic.

Super Bowl Sunday, however, was challenging for the Chiefs offensive lineman who watched from some 1,500 miles away as his teammates fell 31-9 against the Tampa Bay Buccanneers as injury-depleted pass protection left Patrick Mahomes scrambling much of the night

“It was tough because of course, you want your guys to win,” Duvernay-Tardif said. “They worked so hard in order to get to that point. We know that injuries happen but I think it’s just important to have good depth.”

Due to COVID-19 restrictions, Duvernay-Tardif viewed the game from his apartment in the South Shore of Montreal.

“I remember I was working on Saturday at the long-term care facility to have Sunday off,” Duvernay-Tardif said. “We had a curfew so I watched it by myself.”

Duvernay-Tardif opted out of the 2020 NFL season, choosing to put his medical degree to good use in the midst of a global pandemic. He went to work in a long-term care facility in Montreal. “The Doctor” holds a medical degree from McGill University but since he hasn’t completed his residency program yet he can’t work in full as a physician.

“Sometimes I was a nurse, sometimes I was an orderly, a resident, I was basically helping where help was needed,” Duvernay-Tardif said. “It was tough. We lost a lot of patients and we know that long-term care facilities were pretty badly affected.”

The Chiefs and his teammates, however, were always in his thoughts.

“Football is in your DNA,” he explained. “I remember throughout November, December and as we were heading to the playoffs sometimes on Thursday I would wake up and be like, ‘Is it a shell practice, is it a full-speed practice?'”

Duvernay-Tardif worked his schedule around Chiefs games. Watching his teammates finish the season 14-2 amidst a Super Bowl run meant walking into a patient’s room the next day beaming with pride and seeing highlights of another big win on the television.

“The patients were also behind the Chiefs,” Duvernay-Tardif said with a smile. “There was a Chiefs kingdom South Shore of Montreal.”

Football provided the 30-year-old with an opportunity to set aside the chaos and grim reality of the moment.

“I think at the end of the day, looking back at this year, being able to watch the Chiefs on Sunday, that was kind of the thing that was keeping me grounded,” he said. “It was fun, it was fun to watch my teammates, fun to stay in touch with them as well throughout the season even though I wasn’t there.”

The long-time right guard returns to a Chiefs offensive line still reeling from the aftershocks of the Super Bowl LV loss. Gone are teammates Eric Fisher, Mitchell Schwart and Austin Reiter. Of the 16 offensive lineman on the team’s roster, Duvernay-Tardif has only played with Andrew Wylie, Nick Allegretti and Martinas Rankin.

When he pulled on his helmet Tuesday, it was the first time he put it on since leaving the field in Super Bowl LV in Miami as a champion. Now he finds himself part of an entirely new group and competing to find his place.

“I think coaches and scouts this year worked so hard this year to build together an O-line where everybody can play and everybody or most people have played in the past,” Duvernay-Tardif said. “We have a tremendous amount of depth this year and I’m really excited to be able to contribute to this offense.”