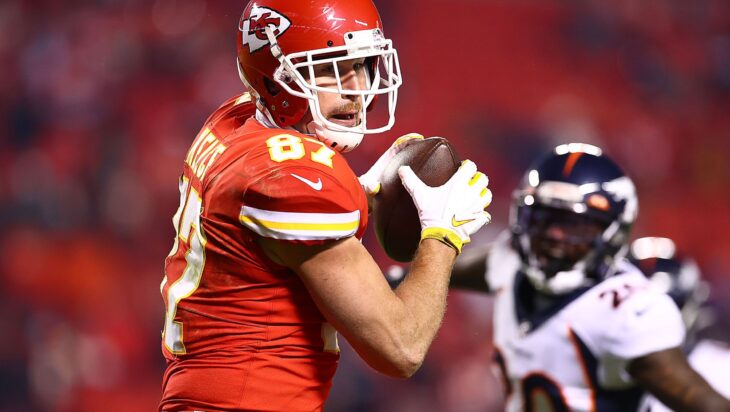 Travis Kelce enjoyed another big night for the Chiefs in Sunday’s 22-16 win over the Denver Broncos at Arrowhead Stadium, registering 1,000 receiving yards in a season for the fifth-straight time, extending his own record for NFL tight ends.

“That’s quite an accomplishment,” said head coach Andy Reid. “Nobody enjoys the game or works harder than Kelce does. It’s great to see this happen to him. He loves playing, he loves playing the game.”

Kelce reached the 1,000-yard mark on the season during his second catch of the night, a 19-yard gain on Kansas City’s first drive of the second quarter. He finished the game with eight catches for 136 yards and a touchdown. Over the past

Kelce currently ranks second in the NFL in receiving yards behind DK Metcalf’s 1,119 yards and fourth in receptions, just eight behind league-leader Keenan Allen with 90.

Yet despite the statistical accolades, Kelce remains unconvinced that he’s playing the best football of his career at age 31.

“I’ll leave a game thinking I didn’t play that great, and it’s happened over the past couple of games,” Kelce said. “Today I know there were about five to 10 plays I wish I would have had back, I could have been better for my teammates, especially in the run game and in the pass game.”

That self-criticism, however, is likely part of what motivates Kelce.

“It’s non-stop of having that mentality of wanting to get better and never being satisfied with that,” he said. “I guess just right now as we’re rolling as an offense it’s just been very fortunate that I’ve been able to help out the team the way I have in the receiving game and hopefully going forward that stays true and I’ll there every single time my number’s dialed up.”

This also marks the fifth time Kelce has recorded 80 or more receptions in a single season. He joins Tony Gonzales (eight) and Jason Witten (six) as the only tight ends with at least five seasons of 80 receptions or more.

Kelce also reached another career milestone on Sunday night by topping 7,500 career receiving yards in his first 108 games. He joins Rob Gronkowski as the only tight ends in league history to reach that mark in their first 108 games. Gronkowski had had 7,584 yards at that point in his career, while Kelce now has 7,579 receiving yards in eight seasons.

Kelce says the statistics are something to “hang your hat on when the career is over,” but for now there are more important items on his agenda.

“Right now I’m just focused on the task at hand, trying to win football games,” Kelce said. “I’m going to enjoy this one for a night with the family and then from there just focus on Miami.”