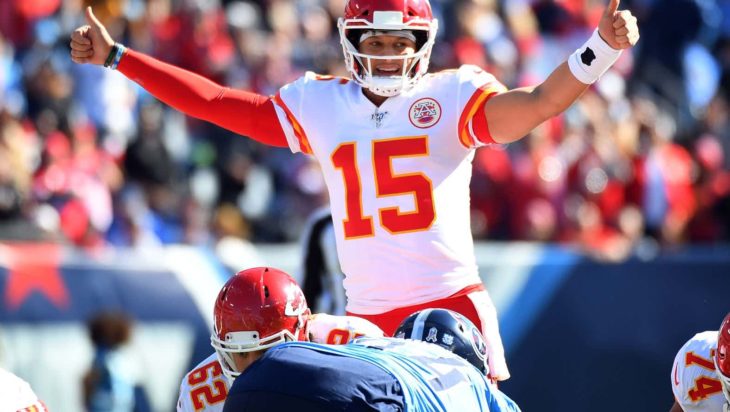 The Tennessee Titans escaped with a 35-32 win over the Chiefs in Week 10 but they didn’t slow down the Kansas City offense.

Quarterback Patrick Mahomes, in his first game back from a dislocated right kneecap, completing 36-of-50 passing for 446 yards and three scores. Much attention focuses on the Chiefs defense stopping Titans running back Derrick Henry, but the Titans find a solution for Mahomes serves as an equally important equation.

The Titans defense lines up largely the same as when the Chiefs faced them in Week 10. They still run primarily man free, cover 3 and cover 2. Defensive coordinator Dean Pees likes to send linebackers and safeties on B-gap blitzes to disguise their blitzers pre-snap.

Defensive end Jeffery Simmons and defensive tackle Jurrell Casey seek to control the line of scrimmage. Casey didn’t play against the Chiefs in the first matchup due to an injury. They pose a strong challenge to the Chiefs interior offensive line.

Harold Landry shows good bend off the edge from his outside linebacker position. Inside linebacker Rashaan Evans provides explosiveness as a blitzer and can deliver punishing hits on ball carriers, although he is dealing with a foot injury that could limit his burst. Jayon Brown provides another solid inside linebacker for the Titans, but he’s questionable with a shoulder injury that kept him out of last week’s win over Baltimore. He also didn’t see Kansas City in the last matchup due to injury.

The strength of this defense lies in their secondary. Former Patriots cornerback Logan Ryan, 10-year veteran corner Tramaine Brock and seven-year veteran safety Kenny Vacarro provide experience and guidance for the younger members of the secondary. Cornerback Adoree’ Jackson brings a speed element to the defensive backs, and Kevin Byard is quickly becoming one of the best safeties in the league.

The Chiefs executed a great game plan in attacking the Titans in Week 10. They kept Mahomes on the move, changing the aiming point for the aggressive defense.

Kansas City attacked the linebackers with Texas routes from the running backs out of the backfield, forcing the linebackers to navigate traffic on their way to cover the backs in the flats. They also used tight end Travis Kelce to attack the middle of the field behind the linebackers and the hook/curl zone against cover 3.

Kansas City picked on Ryan both in the passing and running game. Ryan gives plenty of cushion to the speedy Chiefs receivers and isn’t the best tackler in space. His poor tackling made him a liability on the outside run game too where the Chiefs went after him with toss plays, stretch runs, split zones and jet sweeps. The outside run game was fairly effective and is the best area to attack the Titans defense, with the added bonus of making Ryan to make a tackle.