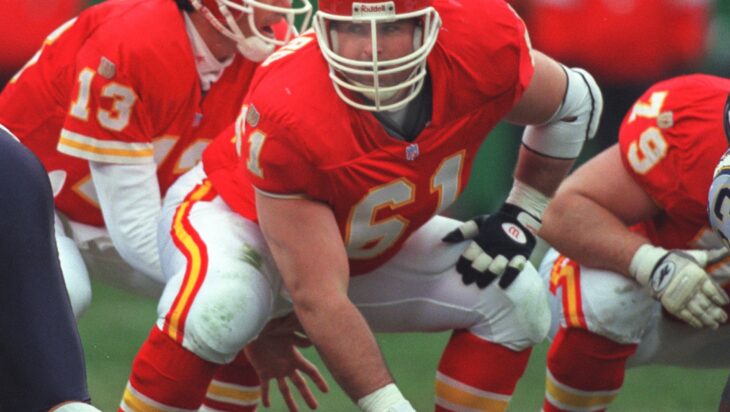 As an anchor of the dominant Kansas City Chiefs teams of the 1990s, Tim Grunhard helped pave the way for the likes of Christian Okoye and Marcus Allen while serving as center for Joe Montana, and now he’s heading into the club’s Hall of Fame and the Ring of Honor at Arrowhead Stadium.

Chiefs chairman and CEO Clark Hunt announced Grunhard’s induction during an NFL Draft event for season ticket members at the stadium on Saturday.

“Known for his toughness and grit, Tim helped pave the way for Marty Schottenheimer’s physical running attack that was a staple of Chiefs football in the 1990s,” Clark said in a statement. “Off the field, Tim showed a commitment to serving the community throughout his career, and his dedication to Kansas City has continued well after his playing days. We look forward to adding Tim’s name to the Ring of Honor at GEHA Field at Arrowhead Stadium this fall.”

A stalwart of Kansas City’s offensive line for 11 seasons, Grunhard stepped into starting lineup and never looked back. After missing four games due to injury in 1992, he started the final 120 games of his NFL career, tied for the fourth-longest stretch of consecutive starts in team history . He finished his career with 10 playoff game appearances for the Chiefs, at the time tied for the most in club history.

Grunhard earned All-Rookie honors in 1990 and received a Pro Bowl nod in 1999.

Grunhard continued making his home in Kansas City after his retirement from the NFL. He served as head coach of Bishop Miege High School from 2006 to 2011, winning five-straight district titles and the 2009 Kansas 4A state title. In 2012 he headed to the college ranks, joining the Kansas staff as offensive line coach under Charlie Weis. He left after two seasons to spend more time with his family in Kansas City, returning to coach offensive line at Bishop Miege. He’s a longtime radio show host and contributor on the Kansas City airwaves, currently working with Sports Radio 810 WHB.

Grunhard was also inducted into the Missouri Sports Hall of Fame in 2016. The club plans to announce the date of Grunhard’s induction ceremony after the NFL announces the season schedule on May 12.