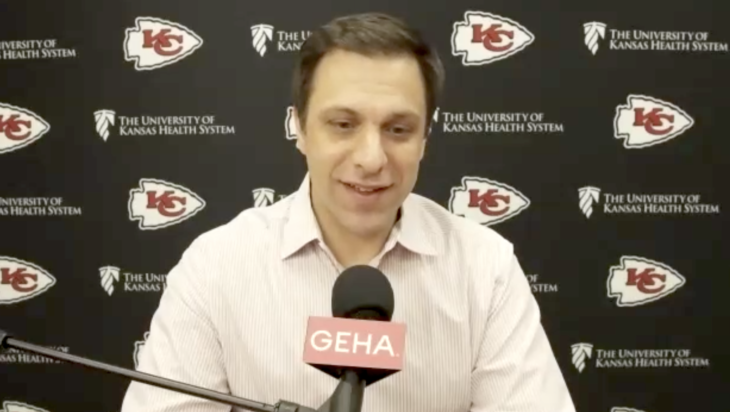 Chiefs general manager Brett Veach served as a spectator only for the first round of the 2021 NFL Draft Thursday night and while it proved a fun night at One Arrowhead Drive, he was never tempted to stray away from his two picks in Friday night’s second round and move up the draft board.

“There wasn’t a time where there was any temptation,” Veach said. “When we made that move for Orlando (Brown Jr.), that was the guy we wanted and we were happy and content to work with these two twos tomorrow.”

The Chiefs currently own the No. 26 (58th overall) and No. 31 (63rd overall) selections in Friday’s second round. The team doesn’t currently hold any selections in the third round but is slated to make four selections on Saturday, barring any additional trades.

No surprises in the first round

There weren’t many surprises or big curveballs in Thursday’s first round according to Veach, who said players general fell into the zones he thought they would.

“I think you look at the draft, in the first 18 to 24 picks, these were guys that if we didn’t have in one we had in early two,” Veach said. “I would say pretty much even toward the end there, these guys, obviously (Payton) Turner, (Eric) Stokes, (Gregory) Rousseau, pass rusher from Penn State (Jayson Oweh), (Joe) Tryon, these were all guys that we liked right in that range.”

Veach expects much more unpredictably in the second and third rounds on Friday night.

“There will certainly be a lot more tomorrow, and that’s why I think having those two twos will be very advantageous for us,” Veach said.

The Chiefs used their first-round selection as part of the trade bringing Brown to Kansas City from Baltimore, and that move greatly altered Veach’s draft plans – for the better, he contends.

“I think the benefit for us is addressing that left tackle need that we can go in any different direction,” Veach explained. “We can go O-line, we can go D-line, we can go corner, we can go safety, linebacker, so I think that’s the benefit of where we are and having those two twos that we’re not pigeonholed into saying, ‘We need a left tackle, we’ve got to get this taken care of.’”

Prior to the addition of Brown, the Chiefs appeared destined to use their first-round selection on a left tackle. The trade with the Ravens not only filled the club’s biggest need, it also returned an additional second-round pick in what Veach calls the “hot zone” of this year’s draft between the second round and the mid-third round.

“Once we addressed that need and we were able to acquire another second-round pick it really opened the entire board for us and allowed for maximum flexibility,” Veach said.

Perhaps unsurprisingly, there’s one position Veach will rule out selecting on Friday.

“I think the benefit for us is we can go in literally any direction,” Veach said. Other than quarterback I think anything is on the table for tomorrow.”

The Chiefs didn’t make any moves on Thursday night but their AFC rivals all made selections. The Broncos selected Alabama cornerback Patrick Surtain II at No. 9, the Chargers landed Northwestern tackle Rashawn Slater at No. 13 and the Raiders chose Alabama offensive lineman Alex Leatherwood with the No. 17 pick.

Veach wasn’t surprised the Broncos under head coach Vic Fangio went defense in landing Surtain, whom he called on of the top corners in the draft. The Chargers and Raiders picked up great value at offensive line with their selections, the GM said.

“I think teams are probably just staying true to the board, taking the best player available, but all those teams took some good players and I look forward to that competition with those guys,” Veach said.

Following Thursday night’s first round, Veach planned to stay in the draft room with his staff into the wee hours Friday morning restacking and reshuffling the draft board reflecting the remaining available players and how Thursday night’s selections and trades might affect team needs and the strategies of other clubs in Friday night’s second and third rounds.

“I think we’re happy with the numbers and kind of how they worked out, and again having 58 and 63, I think we’re going to be in a good spot to get a couple of good players and have some flexibility,” Veach said.

How the first round unfolded will have an impact on where the Chiefs go in the second round. Six edge rushers, five wide receivers and three linebackers went off the board in the first round, all potential targets of Kansas City on Friday night.

“There was obviously three really good wideouts and they went early,” Veach explained, “and then it’s kind of just picking at some of those positions that we talked about during this process, the O-line, D-line or D-end position and the cornerback position. There was a run on corners in the early part and then toward the end there there was a couple of corners that go off the board.”

Don’t be surprised if the Chiefs make a move on Friday night to land the player they want.

“I think the value here is really the second round into the mid-third, and again excited about having those two twos,” Veach said.