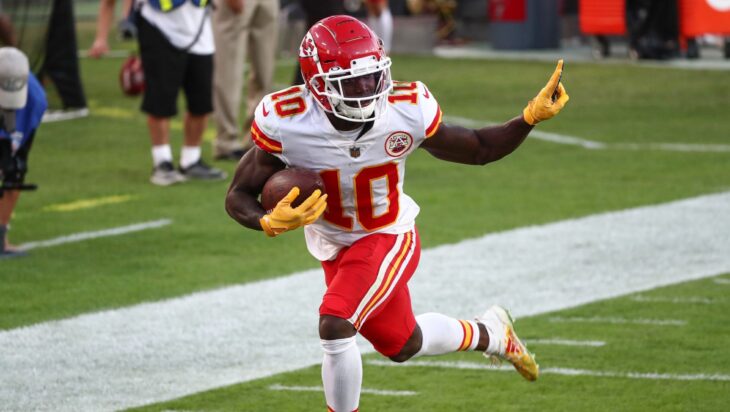 KANSAS CITY, Mo. — No one has ever run faster in a Chiefs uniform than Tyreek Hill, and in a blink of an eye on Wednesday the dynamic playmaker sped out of Kansas City to the Miami Dolphins in a blockbuster trade that came out of nowhere.

In exchange for Hill, the Chiefs are reportedly receiving five draft picks: the No. 29 pick in this year’s first round, a 2022 second-round pick (No. 50) and a 2022 fourth-round pick along with fourth- and sixth-round selections in the 2023 draft.

Hill reportedly lands one of the richest contracts ever handed to an NFL receiver, a four-year, $120 million deal including $72.2 million guaranteed. Hill is slated to earn $75 million during the first three years of the deal, which at an average of $25 million per season makes him the highest-paid receiver in the league.

The collapse in contract talks between Hill and the Chiefs marked a stunning turn of events from even a week ago when the two sides appeared to be nearing agreement on an extension. It was just 11 days ago that Hill tweeted the message, “we came a long way thank you chiefs kingdom I’m forever indebted.”

But it was one week ago the NFL landscape shook with news of another blockbuster trade with wide receiver Davante Adams heading from Green Bay to Las Vegas. Adams inked a new deal with the Raiders, a five-year contract worth $140 million and $65.67 million guaranteed. Both players are represented by the same agent, Drew Rosenhaus, and the Adams contract expected to look similar to a Hill extension with the Chiefs.

Instead, contract negotiations hit a wall, and the Chiefs granted Hill the opportunity to seek a trade. Fewer than 90 minutes after that news broke, Hill was on his way to Miami.

And of course now the club must move forward with replacing their six-time Pro Bowler and the fifth-leading pass catcher in franchise history. The club last week signed free agent JuJu Smith Schuster but the team has also lost free agents Byron Pringle and Mecole Hardman.

The team was expected to host Green Bay receiver Marquez Valdez-Scantling on a free-agent visit Wednesday.