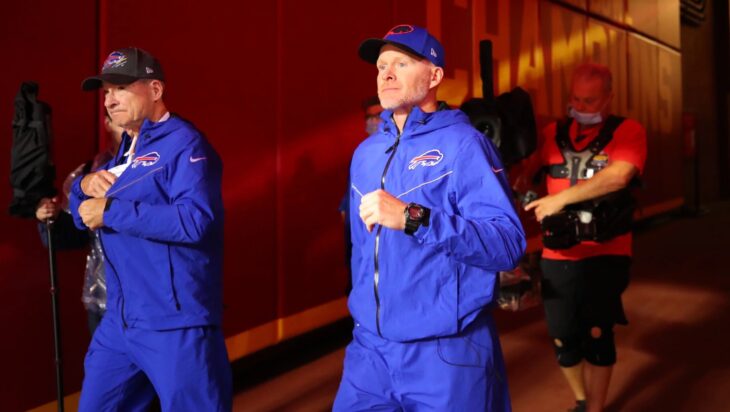 KANSAS CITY, Mo. – Sunday marks 17 years to the day that Steve Spagnuolo and Sean McDermott celebrated together, the linebackers coach and the safeties coach of the Philadelphia Eagles, basking in the glory of their team’s victory over Atlanta in the NFC Championship game and cherishing the Super Bowl berth that accompanied the win.

Sunday evening at Arrowhead Stadium one will be triumphant, the other saddened. But Spagnuolo, the Chiefs defensive coordinator, and McDermott, now head coach of the Buffalo Bills, won’t let the rivalry get in the way of family.

“I’ll tell you what,” Spagnuolo said as he prepared his defense to face the Bills on Sunday, “Sean and I are very close. I love that man and I’m so proud of what he’s done there.”

“I kind of look up to him from a bigger brother standpoint, although I have a brother myself,” McDermott said this week. “Just the way he has helped me over the years, even coming into the head coaching position.”

McDermott was 25 years old with a year as a graduate assistant for William & Mary under his belt when he landed a job as a scouting administrative coordinator with the Eagles in 1999. That was Andy Reid’s first season in Philadelphia. It was also the same year McDermott met a 39-year-old Spagnuolo, who was a defensive assistant under coordinator Jim Johnson.

The two assistants both rose quickly up the ranks. In just two years McDermott moved over to be Reid’s assistant, which meant handling everything from driving the coach around town to taking notes in salary cap meetings. McDermott was “glued” to Reid, to the point where colleagues called him “Little Red.”

Spagnuolo was also moving up in the organization at the same time, graduating to defensive backs coach in 2001.

“He was the assistant secondary coach and safeties coach,” McDermott said, “and then he and I teamed up together and he was the secondary coach and I was his assistant. Before that I was the quality control coach which he was doing some of that when I first got to Philadelphia there under Andy.”

It was evident immediately how close the two men were together as friends, Reid said.

“I would tell you that they had great camaraderie amongst them,” Reid said. “A lot of times you get a competition where one guy is trying to climb the ladder over another guy, and that’s not what they had.”

The shared experiences certainly forged a bond but McDermott also credits the kindness and generosity of Spagnuolo for helping to shape his career just as much as Reid did.

“Just what he taught me, what I learned from him, the amount of time he spent with me when he really didn’t need to do that,” McDermott said.

The friendship extended off the field as well. Spagnuolo gifted McDermott a book on leadership that he still has to this day. Spagnuolo and his wife, Maria, have won the hearts of many players and colleagues throughout the years with their hospitality. Chiefs defensive tackle Chris Jones is superstitious about Maria Spagnuolo’s meatballs after she served them up before Super Bowl LIV.

“She’s a great cook, yeah,” McDermott said about Maria. “The thing I love about both of them is that everyone is family to them. I can’t say enough about the two of them.”

McDermott had a chance to return those favors during 2018 after Spagnuolo wasn’t retained by the New York Giants as defensive coordinator and a stint as interim head coach.

“When I had that year when I was out of it for a little bit living in Philadelphia, I did go up to visit with Sean, and it was a great three days,” Spagnuolo said.

The working relationship between Spagnuolo and McDermott ended in 2007 when Spagnuolo departed to become defensive coordinator in New York. McDermott eventually took the reins of the Eagles defense when Johnson had to step away during his battle against cancer. McDermott’s 12 years with the Eagles ended in 2011 when he was dismissed by Reid.

Johnson was the defensive mentor for both coaches as well as other members of the Eagles staff during that era. Bills defensive coordinator Leslie Frazier and Washington head coach Ron Rivera were both on the same staff with Spagnuolo and McDermott.

“I thought Jim Johnson managed it well, and they were lucky to have Jim as their mentor there,” Reid said.

Quick pressure on the quarterback was a key principle of Johnson’s defensive approach, and it’s a philosophy that continues on through his disciples, even if the defenses on display at Arrowhead on Sunday implement the strategy in different ways, McDermott explained.

“All the coaches that were with Andy and under Jim on that defensive side in particular with Ron Rivera, Leslie Frazier, Spags, we’ve all kind of gone off and done our own thing, and yet there’s a lot of the core of what Jim had in his system,’ he said. “But then there’s some additions that have been made to it and tweaks and whatnot, just more than anything to stay current with the game.”

The winner of Sunday’s game will host the AFC Championship game next weekend and stand one win away from the Super Bowl. But at the end of the day, one man will stand proud of the other for his accomplishment.

“We’ll battle like brothers do,” Spagnuolo said. “If we were going to go out on the basketball court, right, we’re going to try to win as hard as we can, but really proud of what Sean has done up there.”