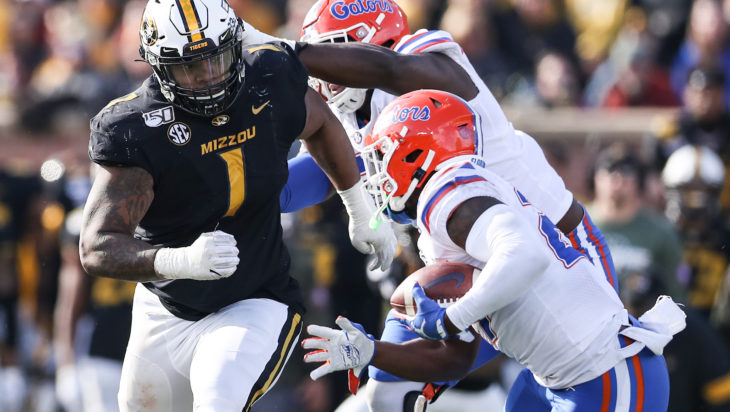 KANSAS CITY, Mo. — The Chiefs doubled down on offense in the first round of the NFL Draft, landing LSU RB Clyde Edwards Helaire with the No. 32 choice of Thursday’s first round. Now general manager Brett Veach turns to other needs as the team enters night two with selections near the end of the second and third rounds.

Kansas City holds the No. 31 pick in the second round — acquired from San Francisco last year in the deal that sent edge rusher Dee Ford to the 49ers. The Chiefs sent their own pick, No. 32 in the round, to Seattle in exchange for edge rusher Frank Clark last April.

In the third round, the Chiefs hold the final regular selection (No. 96 overall) before 10 compensatory selections are made.

Where will the Chiefs go in the second and third rounds? Here are positions of need that could get filled Friday night.

The Chiefs feel comfortable with Charvarius Ward, Bashaud Breeland and Rashad Fenton as their top three cornerbacks, but Veach believes you can never have enough guys who can cover. Kansas City has obvious needs for depth in 2020 but also potential starting needs in 2021. The biggest need is a nickel back who can fill the role Kendall Fuller played last season and can backup at corner or safety, especially with Juan Thornhill returning from an ACL injury.

Potential targets could include LSU cornerback Kristian Fulton, Minnesota safety Antoine Winfield Jr . and Lousiana Tech cornerback Amik Robertson. The Chiefs would probably need to move up in the second round for a show at Alabama safety Xavier McKinney or Utah cornerback Jaylon Johnson.

Wisconsin’s Zack Baun is the consensus top linebacker remaining on the board, but it’s hard to see him still on the board at No. 32. Appalachian State’s Akeem Davis-Gaither is a talented small-school linebacker with a lot of athleticism. Ohio State’s Malik Harrison would help fill the need for a pass defender who can take on tight ends and running backs out of the backfield.

The Chiefs appear more in the market for interior offensive line help, but don’t rule out a move for a swing tackle who could develop into a starter. A run on tackles Thursday night leaves the pool thing there, however.

Interior helped along the line is plentiful in the second and third rounds, however, and LSU center Lloyd Cushenberry Louisiana guard Robert Hunt and Temple center Matt Hennessy might be available in the second round. Guards John Simpson from Clemson and Damien Lewis from LSU could be on the board late in the third.

The Chiefs have played with fire in recent seasons without a reliable pass catcher behind Travis Kelce. Andy Reid’s West Coast offense runs through the tight end, as evidenced by Kelce’s four-straight 1,000-yard seasons. But with Kelce entering his age 31 seasons, developing a reliable No. 2 should be in the cards for the Chiefs soon.

Dayton’s Adam Trautman and Notre Dame’s Cole Kmet are arguably the two top tight ends in the draft and could be available late in the second round. Missouri’s Albert Okwuegbunam is an intriguing athlete who projects as a late third- or early fourth-round selection.

Another intriguing potential choice: Notre Dame receiver Chase Claypool. He’s more receiver than tight end, but at 6-foot-4, 238-pounds he can line up inside and offer a matchup nightmare, especially on the field with Kelce at the same time.

The Chiefs have plenty of numbers for now on the line, but they also have a lot of question marks heading into 2021. The Chiefs have only five linemen signed beyond 2020: Frank Clark, Alex Okafor, Derrick Nnadi, Khalen Saunders and Tim Ward.