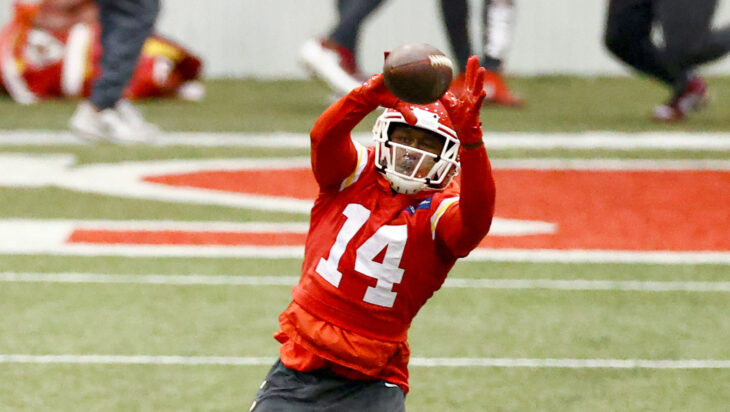 Kansas City listed Sammy Watkins as questionable for Super Bowl LV against the Tampa Bay Buccessners on Sunday but head coach And Reid said the receiver “did good” in Friday’s workout.

“I’m encouraged to have him on Sunday,” Reid said via the practice pool report. “I think he’ll be there.”

The club listed Watkins as a full participant in Friday morning’s short outdoor workout with temperatures in Kansas City in the 30s. The Chiefs usually take part in a 10-10-10 workout on Fridays running less than 90 minutes without pads.

Watkins expressed optimism on Tuesday that he could play this weekend while leaving open the door that he may not be 100 percent yet.

“Feeling great but still working out with the training staff, with Rick (Burkholder, team’s vice president of sports medicine and performance) and just going over everything so I can have a chance and possibly go out there and feel 100 percent or 95 or 85 or whatever I can get at by Sunday.

“But feeling pretty good, very optimistic, having good practices so hopefully I can go out there and fun and play.”

Watkins hasn’t played since tweaking his calf during the team’s Dec. 27 victory over Atlanta. Watkins missed six games during the regular due to calf and hamstring injuries. He finished the regular season with 37 catches for 421 yards and two scores.

The club hopes Watkins can play and contribute in a meaningful on Sunday against the Bucs but that doesn’t mean the club is expecting a full workload from the veteran receiver. Mecole Hardman, Demarcus Robinson and Byron Pringle also expect to rotate at receiver to ease the snap counts on Watkins. The Chiefs could also add a sixth receiver for the game from the practice squad primarily for special teams.

Running back Darwin Thompson (illness) was the only player who didn’t practice on Friday but he also doesn’t carry a game day tag. Everyone else on the 53-man roster practiced in full.

That includes Robinson, who returned from the COVID-19 reserve list due to a close contact. Offensive lineman Daniel Kilgore remains on the list but is eligible to return Saturday and travel with the team if he clears the league’s COVID-19 protocols.

The Buccaneers listed tight end Cameron Brate (back) and receiver Antonio Brown (knee) as questionable for Sunday’s game. Brown continues dealing with a knee injury that kept him out of the NFC Championship. Brate, who was limited with a back strain on Thursday and did not practice Friday.