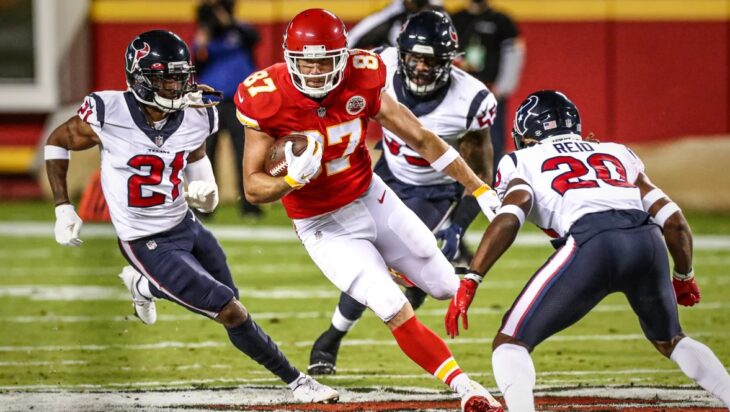 KANSAS CITY, Mo. — The “will they or won’t they’ between the Chiefs and safety Tyrann Mathieu appeared to come to a conclusion Monday night when the club agreed to terms with Justin Reid, a former protegee of Mathieu, who now receives the mantle of leadership in Kansas City.

The three-year deal is reportedly worth $31.5 million including $20 million guaranteed, although official details and yearly salary and cap hits are not yet available. Free agent signings cannot become officially executed until after the start of the new league year at 3 p.m. central time Wednesday.

Reid told Houston’s Fox 26 it was bittersweet leaving the Texans but he’s excited for the opportunity in Kansas City.

“There’s a lot of blood, sweat and hard work that’s gone into making this moment possible,” Reid said. “It does feel really good but the work is not done yet. In fact the work has just started. I’ve got to go earn every penny of that, making it well worth the Hunt family’s while to come in and pick me up.”

The 25 year-old Reid shares staggering similarities with the player he’s tasked with replacing in the Chiefs secondary. He and Mathieu are both Louisiana natives who entered the league as third-round draft picks. Both players signed as free agents from the Texans as well.

But most importantly for the Chiefs, Reid and Mathieu both share a reputation for leadership, performance and even swagger. It’s a trait Mathieu saw in Reid when the pair were teammates in Houston in 2018. Mathieu was also teammates with Reid’s brother Eric at LSU.

“Very sharp young man, very respectful, but when he gets on the football field, he has a mean streak,” Mathieu said of Justin during a press conference in July 2018. “That’s what I like to see from my teammates, but especially younger guys. I like them to come in, understand what they have to do, but also come in with a chip on their shoulder.”

It’s the role of leadership the Chiefs hope Reid can fulfill just as much as the play on the field of Mathieu, who earned team MVP honors in two of his three season in Kansas City. It’s a responsibility relished by Reid, who spoke of “paying it forward” the way Mathieu did for him as a mentor.

“It’s fun for me on the back end just because I like being the guy that gets guys off the line,” told reporters in August. “I feel like safety, middle linebacker too but safety you get to be a chief on the back end, see the whole picture, get to put guys in the right spot. I feel like my job as far as the rest of the guys on the team is to be a resource for them because if I’m playing my best ball and nobody else is, we’re not going to win that way. The only way to move forward is get everybody on the same page and better, and I want to get everybody on the lineup into their best position as possible in order to make plays and that’s my job, as well.”

Reid also seems to understand what the expectations are in Kansas City.

“I’m so excited to get down there, start getting involved with the community, learning the football playbook and doing my part to make an impact and help the Chiefs win another Super Bowl,” Reid told Fox 26.