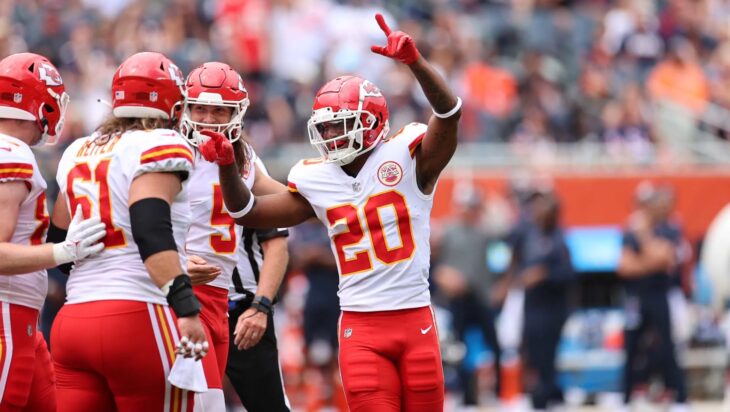 With viral videos showcasing 65-yard kicks through the goalposts on the practice field, Chiefs safety Justin Reid made no secret this week that he was planting seeds with the team’s coaches to let him take a swing at an extra point or field goal try in an NFL game.

“I can finally check that one off,” Reid said with a smile after Saturday’s preseason game against the Chicago Bears. “It was a great feeling.”

During Tuesday’s training camp practice, special teams coordinator Dave Toub grabbed Reid and sent him in for a field goal try after kicker Harrison Butker finished his session on the field. With no warmup or preparation, Reid sailed a kick well wide and well short of the uprights.

“Yeah, I blew it, I blew that one,” Reid said. “He threw me in, threw me in straight to the fire but that’s how it’s going to be. Next time I’m going to get some swings in beforehand, try and get those (leg swings) out of there. But if that ever happens, I’ll be ready for it.”

On Saturday, he was ready. Reid took some kicks with his right leg during pregame warmups in preparation.

“I didn’t know for sure but coaches did let me know – coach Toub, coach (Andy) Reid – let me know if it looked good in pregame, then if the opportunity presented itself they would give me a shot.”

After quarterback Shane Buechele connected with receiver Justin Watson for a 22-yard touchdown pass with 20 seconds remaining in the first half, the time was right for Reid to have his moment. His kick was true, giving the Chiefs a 14-0 lead at halftime. The Bears went on to win the game 19-14.

“Pregame went pretty well, and I got the opportunity and went down the middle,” Reid said. “That was awesome.”

Letting Reid take a kick in a preseason game isn’t for fun and games. In last year’s preseason finale for Houston against Tampa Bay, Texans kicker Ka’imi Fairbairn suffered an injury during pregame warmups. Reid handled kickoff duties that day, sending two kicks inside the 5-yard line. He also made the tackle after one of his kickoffs. Circumstances denied him an opportunity at an extra point attempt.

“I was supposed to get one in that game that I did the kickoffs, we just didn’t get in position,” Reid said. “The coaches wanted to wait until the fourth quarter to let me get a chance, and we just didn’t end up getting down there to kick one.”

Only in the rarest of occasions do NFL teams carry a second kicker and both being active on game days is even more unlikely. For most teams, the backup kicker is the punter, which for the Chiefs would be Tommy Townsend. However, if Townsend must fill in for Butker, that means employing an emergency holder, a role that has been filled in the past by the likes of Jeremy Maclin, Chris Conley and Marcus Kemp.

But the possibility of employing a reliable alternative such as Reid with Townsend holding kicks appeals to head coach Andy Reid versus the alternative of Townsend kicking with a less experience holder.

Coach Reid was all business about the possibility after Saturday’s game.

“Listen, truthfully, it’s hard to find a backup kicker,” he said. “You can’t carry two of them, right, that’s a tough thing to do. For him to be a legitimate kicker I think is a positive thing for us. He can boom it now. He had the one muff-up in training camp but he’s been pretty good with his kicks.”

Toub also plans to let the safety continue working as a backup kicker.

“We’re going to continue because he’s got a good leg, we’re going to keep working it and see what he can do there,” Toub said. “Get a little bit more practice before we just throw him in.”

Justin’s 65-yard field goal on the practice field came off a tee without a block rush. But he still feels comfortable with a more than respectable field goal range.

The emergency kicker is absolutely a role that Justin Reid relishes.

“We got an excellent guy who is going to leave his mark and legacy on this franchise for years to come in Harrison, so I know there’s a lot of chatter or whatever about kicker one, Harrison is obviously kicker one, guys,” he said with a laugh on Thursday. “Let’s put that to bed right now but if he ever wants to play off, wants to take a break, I got his back.”