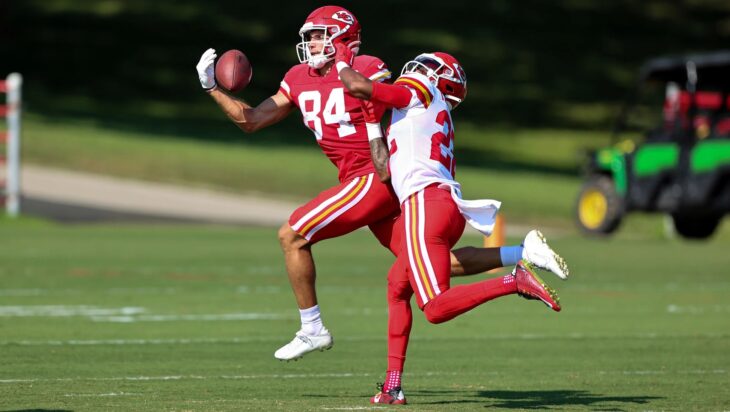 With the first preseason game in the books and training camp coming to a close on Thursday, it’s time to revisit the Chiefs’ squad and project who might crack the initial 53-player roster to open the 2022 season.

Rotations changed a bit following the team’s 19-14 loss to the Bears in Chicago last week. There are 43 players whom Chiefs Digest considers virtual locks to make the roster, leaving 10 positions still hotly contested. The most competitive battles remaining are for the final spots at wide receiver, offensive line, defensive line, linebacker and cornerback.

Here’s my current projection for the 53-player roster based on training camp practices, the team’s first preseason game and discussions with team sources.

No change in this group, and Buechele is still the safe bet to stick around on the practice squad as the No. 3 quarterback. Buechele seemed a bit sharper in training camp this week in the wake of his extended playing time against the Bears in the team’s first preseason game.

This remains an incredibly tough group to winnow down through training camp and the first preseason action. Jones continues posing the biggest mystery with his usage against the Bears and during the preseason putting him squarely on the roster bubble, and maybe on the wrong side. Based purely on usage and ignoring the name and experience, Jones appears as the team’s fourth running back and on the outside of the picture. But factor in his two seasons with more than 1,000 yards from scrimmage, his career 4.5 yards per carry, and better than anticipated receiving skills and it’s hard to ignore him. Still seems an ideal candidate if injuries occur around the league but could also be part of this team as well.

Injuries to Smith-Schuster and Hardman don’t seem significant factors yet in upsetting the balance of this group. Coleman’s best shot at the roster is by winning a position as a return specialist. Gordon’s lack of special teams availability makes it tough to justify as a sixth receiver but the proposition of the veteran returning to prime form is tempting. Powell has shown more maturity and experience this season but is still on the outside looking in for now. Ealy probably isn’t ready yet but is a strong practice squad candidate.

Bell’s hip flexor injury probably doesn’t necessarily impact the initial 53-player roster because the Chiefs appear on course to keep four tight ends. But if Bell’s injury requires a short stay on injured reserve, he’ll need to start the season on the active roster in order to be designated to return. Franks has had a strong camp despite an uneven performance in the first preseason game.

The starting line is set barring injuries and it’s hard to see that changing. The distance between Wylie and his competition at right tackle has increased throughout camp. Allegretti is a lock as the sixth man, he’s a starting-caliber guard who can play center as well and is skilled as an extra blocker (or receiver!) in heavy formations. Reiter is the most experienced backup center and has rotated at both guard positions. Gurman is the rising candidate this week, moving into the No. 2 unit at guard after a strong performance against the Bears. The biggest battle is for the swing tackle role. Johnson and Christian have both had opportunities but failed to seize the job yet. Wanogho is also an option, and while the Chiefs believe Kinnard has the athleticism to play tackle he might benefit from a transition to guard. General manager Brett Veach might be on the lookout for a swing tackle during roster cutdowns over the next few weeks.

Everything remains very fluid along the defensive line with the recent arrivals of Carlos Dunlap, Danny Shelton and Matt Dickerson. While it’s too early to write down Shelton as a lock to make the roster, his skill as a true nose guard is something the Chiefs were lacking. Danna remains one of the starters opposite Clark on the end of the line, and he’s also getting experience kicking inside on passing downs. Wharton and Saunders have both had strong camps under new defensive line coach Joe Cullen. Herring nudges past Kaindoh in this week’s roster projection but it’s still an open race for the final edge position.

This week’s roster projection is about the rise of Harris with Lee and Carter slipping a bit in the depth chart. Harris has received more work this week as the strongside linebacker with the ones in place of Lee, and Harris is also the top backup behind Bolton as the candidate to wear the green dot and quarterback the defense. Carter is an interesting case since his contract worth $1.77 million is fully guaranteed and he’s a four-phase special teams player.

The real question at cornerback is whether the Chiefs can keep a sixth cornerback, and even if they did it’s still a contest. The five projected roster candidates are virtual locks barring injury, and the fifth member of the Fab Five in Johnson has absolutely done everything to earn a spot. Lammons is a skilled special teams performer but that may not be enough to win a roster spot. Bootle offers the ability to play the slot backing up Sneed but the Chiefs also view McDuffie as a potential option there.

Anderson earned a promotion to the active roster last season, and while he remains a strong candidate it seems difficult to envision him moving past Bush for the No. 4 spot. With the Chiefs likely holding on to as many of their young cornerbacks as they can, that might result in going with just four safeties to open the season. Might be a risk exposing Anderson to the practice squad but it would bolster the team’s depth here if they can hold on to him.

Despite all three specialists missing time this week, there’s no risk of anyone losing their job here. Justin Reid, Juan Thornhill and Travis Kelce are no threats in climbing the depth chart and dislodged anyone here.