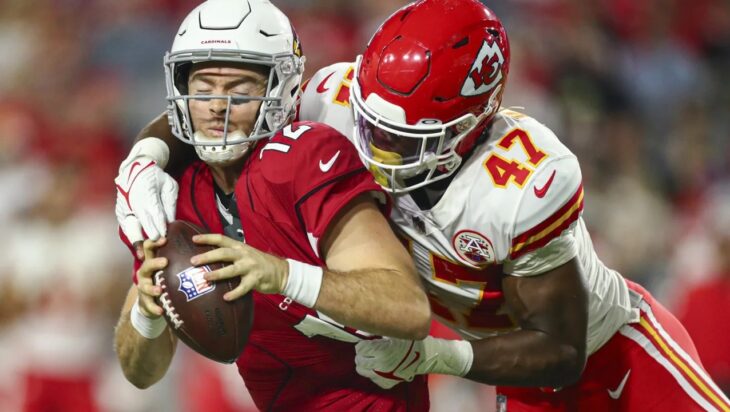 KANSAS CITY, Mo. — With the second preseason game in the books and training camp in the rear view mirror, the roster picture for the Chiefs is coming more in focus with a few grey areas remaining.

As we look at this roster projection of the preseason, we’ll be using the same format that NFL teams such as the Chiefs use to clarify their roster. This isn’t the club’s roster projection, but it’s my take based on observations during training camp, two preseason games and discussions with sources close to the decision-making process.

Players will be grouped in three categories: 53 indicates these players are a virtual lock for the Week 1 roster barring an injury or transaction; bubble means the player is in competition for a final roster spot; and longshot, which means the player has more work to do to make the roster. Longshots can still make the roster as well as be candidates for the practice squad.

Many of the most intriguing battles remaining relate not to positions on the depth chart but rather how many players the Chiefs plan to keep in each group. Players on the bubble, such as Daurice Fountain, Jody Fortson and BoPete Keyes are more in competition with another than they are within their own positions.

This roster projection has 46 players locked into spots on the 53-player roster with 17 more on the bubble, 15 listed as longshots and two projected to start the season on inactive lists.

The Chiefs pared their roster down to 80 players on Monday by waiving quarterback Anthony Gordon and linebacker Riley Cole and releasing defensive end Taco Charlton, safety Will Parks and offensive lineman Bryan Witzmann. The Chiefs must reduce their roster to 53 by 3 p.m. Tuesday, Aug. 31.

The Chiefs waived Gordon, making Buechele the apparent winner of the No. 3 quarterback job. It’s still not out of the picture the Chiefs scan the waiver wire for a third quarterback or turn to a veteran such as Matt Moore, but Buechele turned in two excellent preseason performances in claiming the No. 3 position. He’s still likely tagged for the practice squad but he’s won the first battle

The backfield looks generally set barring any major changes, and it’s difficult imagining McKinnon not making the initial 53. Thompson is squarely on the bubble depending upon how many running backs the Chiefs choose to keep, as there are tough decisions to be made at other positions as well.

Gray largely had a positive camp but overall consistency has emerged as his biggest challenge. Fortson needs to prove he can play special teams effectively as well as serve as a legitimate blocking tight end when needed. He’s had a great camp as a receiving tight end but is on the bubble largely due to the numbers challenge at other positions.

The receiver group remains one of the most competitive battles in camp. One of the biggest riddle revolves around fifth-round draft pick Powell, who remains primarily a third-teamer for now. He requires more seasoning, which makes the practice squad a possibility if the Chiefs believe he can clear waivers. Kemp is having arguably the best camp of his career and is a special teams ace, he has done everything expected of him to earn a spot. Fountain has consistently made plays since his arrival in May. Shepherd’s best shot is a returner, but with Pringle, Hardman and Mike Hughes also options he’s close to falling into the longshot group.

Injuries significantly complicate the picture at offensive line with Long likely to start the season on the PUP list allowing him to return at full strength later in the season. Duvernay-Tardif (hand) and Blythe (sports hernia) could possible land on injured reserve starting the season. If Allegretti’s flexibility as a backup center makes him an attractive option. Expect the Chiefs to keep nine or 10 offensive linemen, making this one of the the most fluid groups of any position on the squad.

The defensive line should be a deep group for the Chiefs in 2021. If Saunders were ever on the bubble he’s firmly off of it now after a strong training camp. Tim Ward and Demone Harris remain in contention for a a 10th spot on the defensive front with Ward out in front right now. Herring will likely spend the season on the non-football injury list as the recovers from a torn ACL suffered in January.

Only a year ago the Chiefs kept just four linebackers starting the season yet this year they have eight making a compelling case for the roster. The draft picks spent on Gay and Bolton help, giving the Chiefs a potentially fierce starting lineup with Hitchens. The players on the bubble each offer different skills: O’Daniel is a skilled special teamer, Harris can play all three positions and call plays on the field while Cobb offers rare speed and athleticism.

Hughes and Fenton have battled much of the last few weeks for the No. 3 corner spot but the real roster battle is further down the depth chart. The Chiefs will likely keep five corners, but could they keep a sixth? Baker and Keyes have been battling for the final spot and both have played well in camp. The number of corners the Chiefs keep will likely depend on whether or not the club keeps a fifth safety.

The top three are set, no matter what depth chart mind games the Chiefs play with Thornhill. Watts remains a positive impact in special teams and seems to be the biggest benefactor of the club parting ways with the veteran Parks. That leaves it up to whether the Chiefs want to keep a developmental player such as Anderson or Key in favor of a player with more experience at another position.

The specialists are set. That’s all.