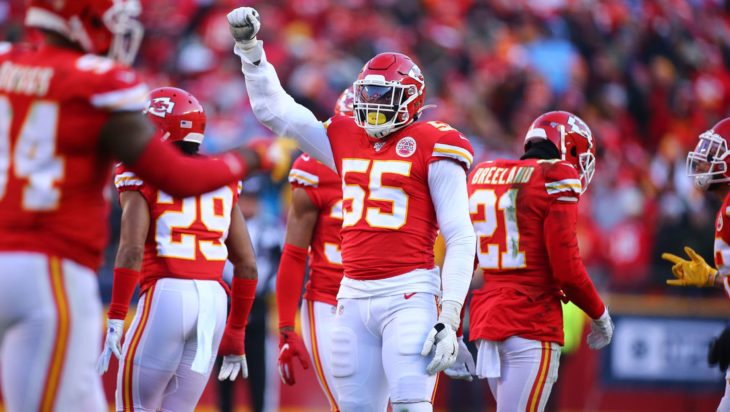 KANSAS CITY, Mo. — The Chiefs freed up some much valuable salary-cap space hours before the start of the NFL’s new league year by restructuring the contract of defensive end Frank Clark, according to a report from Yahoo Sports.

The Chiefs converted $5 million of Clark’s 2020 base salary into a signing bonus, which allows them to prorate that amount over the four remaining years of his contract. That reduces his salary-cap figure for 2020 by $3.75 million.

The club also will not pick up the final year contract option for offensive lineman Cam Erving. That move will save an additional $3.25 million toward this year’s salary cap. The two moves combined will reduce the team’s salary cap obligations by approximately $7 million.

The Chiefs must get under the league-mandated salary cap before the start of the new league year at 3 p.m. central time Wednesday. Teams must fall under the salary cap counting the value of the top 51 contracts they have signed for the 2020 season.

The league set the salary cap at $198.2 million but the Chiefs expect to roll over approximately $21.8 million from 2019, according to the most recent NFLPA salary cap report. The league and NFLPA have yet to reveal the exact salary cap ceiling for each team.

The Chiefs have only made one reported addition during the early negotiating window for free agents, agreeing to a new two-year deal for quarterback Chad Henne. Terms have not yet been disclosed.

While restructuring Clark’s contract gets the Chiefs under the salary cap threshold, for the time being, it doesn’t necessarily open the flood gates for a wave of free-agent signings as the new league year begins. The club must still make other moves, such as resolving the contract situation for franchise player Chris Jones or restructuring additional contracts, in order to create more space for veteran free agents.