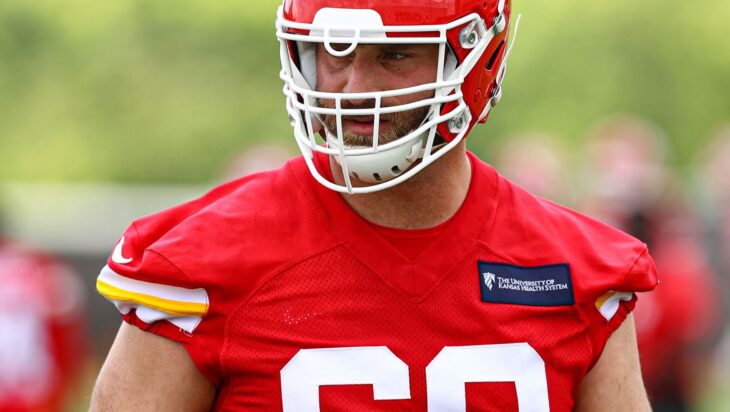 KANSAS CITY, Mo. — Kyle Long returned to the gridiron this spring following a one-year retirement but his comeback with the Chiefs suffered a setback due to a lower leg injury suffered during Wednesday’s offseason practice.

Head coach Andy Reid said Long hurt his knee but initial test results did not indicate any ligament damage. NFL Network reported Long suffered a fractured kneecap but later issued a correction terming it a lower leg injury. That report indicated Long might be able to return before Week 1 of the regular season.

“They’re going to look at it and determine it,” Reid said. “A chance he has to have surgery on it, but we’ll see where it’s at.”

Long, who worked extensively worked at right guard with the starting offensive line during offseason workouts starting last month, took to Twitter in acknowledging the injury.

“I did everything I could to prepare to get back for football,” Long wrote. “Zero regret. I’ve been getting better everyday and having so much fun with my new team. Focusing on controlling the things I can control. yesterday was not one of those things!”

The 32-year-old Long signed a free-agent contract with the Chiefs in March worth $1.45 million. Incentives and bonuses could push the one-year deal up to $5 million for 2021.

Long earned three-straight Pro Bowl appears for the Chicago Bears from 2013-15 before injuries limited him to 30 starts over the next four seasons. A hip injury ended his 2019 campaign and Long announced his retirement following the season.

His comeback with the Chiefs started promising, however, as Long stepped into the starting lineup immediately and impressing Reid and the coaching staff with this fitness and strength. The club has depth at the guard position, including Laurent Duvernay-Tardif, whom Reid expects to return to the club next week for the team’s mandatory three-day minicamp.

“We’re lucky that we have some good players in there,” Reid said. “One of which, Trey Smith, can get some work too. Then, Larry (Duvernay-Tardif) is kind of back, so you add all of that in there, and (Andrew) Wylie who’s got a couple years starting under his belt. We’re OK there. (Nick) Allegretti, likewise.”

With Long out of action on Thursday, that increases the opportunity for rookies such as Smith and center Creed Humphrey, both of whom Reid praised on Thursday.