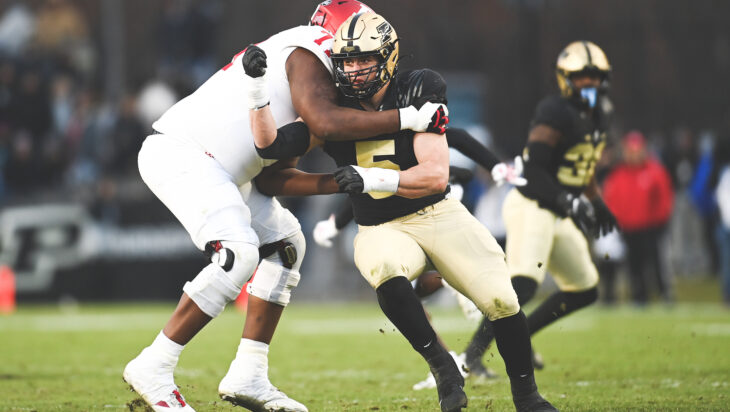 KANSAS CITY, Mo. — The Chiefs went all defense in the first round of the NFL Draft Thursday night, following up their selection of cornerback Trent McDuffie at No. 21 with Purdue edge rusher George Karlaftis at No. 30 overall.

Head coach Andy Reid already dubbed him “the Greak Freak II.” One word played a prominent role in the Chiefs’ decision to select the 21-year-old native from Greece: relentless.

“He has a relentless motor, I mean he is fun to watch,” Reid said after Thursday’s first round. “He does a great job pass-rushing, he does great against the run game. He’s strong, he knows how to play the game, he’s got a great feel for things.”

“It’s relentless,” Karlaftis said after his selection by the Chiefs. “I get after the quarterback, I stop the run and I feel like I’m a three-down player. I’m an all-around player that can do everything and anything that’s asked of him.”

Karlaftis was a late comer to the game of football. His father, Matt Karlaftis, was a javelin thrower at the University of Miami who walked on to the football. He was a teammate with Warren Sapp on the Hurricanes’ 1991 national championship team, but a head injury ended his football career. He and his wife Amy relocated to his home country of Greece in 1998, and George was the first of their four children born in 1991.

As a result of his father’s experience, George didn’t want to play football at first. He excelled in other sports, earning a spot at age 13 on the Greece 16-and-under national water polo team that finished third in the 2014 world championship.

Tragegy struck in 2014 when Matt Karlaftis died of a heart attack at age 44. The family moved to the United States to be closer to Amy’s family in Indiana. George was soon introduced to American football, and a love affair began.

“I love everything about it,” Karlaftis said about his relationship with football. “I like the mental and physical challenge, the strain, the chess game. I like every single play is a single challenge, both presnap, after the ball’s snapped, during the play, whether it’s executing your assignment, making the play, doing the right thing, having the perfect technique and trying to do that over and over and over again and being perfect.”

Since he’s a late bloomer when it comes to football, both Karlaftis and the Chiefs believe his best football remains in his future.

“I’ve only been playing football for about six or seven years now, so I’m really excited to develop, to be under a great system, have great teammates, great organization,” Karlaftis said. “I couldn’t have asked to be in a better situation.”

Despite the late arrival to football, Karlaftis was a four-star recruit out of high school and earned first-team freshman All-American honors in 2019. The defensive end earned second-team All-American honors last season while leading the Boilermakers with five sacks and 11.5 tackles for a loss. At 6-foot-3, 266 pounds, Karlaftis relies on power to pursue quarterback according to NFL draft analyst Dane Brugler from The Athletic.

“Karlaftis doesn’t have elite length or athletic twitch, but he has NFL power, effort and hand work to break down the rhythm of blockers and be disruptive,” wrote Brugler who ranked Karlaftis as the fifth-best edge rusher in this year’s draft. “He is a starting NFL defensive end in a traditional four-man front.”

The concerns over his length and quickness doesn’t faze Veach, who brings up that familiar word about Karlaftis once again.

“Young, relentless, he’s a guy that’s really dedicated to his craft,” Veach said. “All the people that we spoke to at Purdue just talked about how the best football is in front of him.”

The Chiefs currently hold three selections in the second night of the NFL Draft on Monday. The club has two picks in the second round (No. 50 and No. 62 overall) and a third-round choice (No. 103 overall).