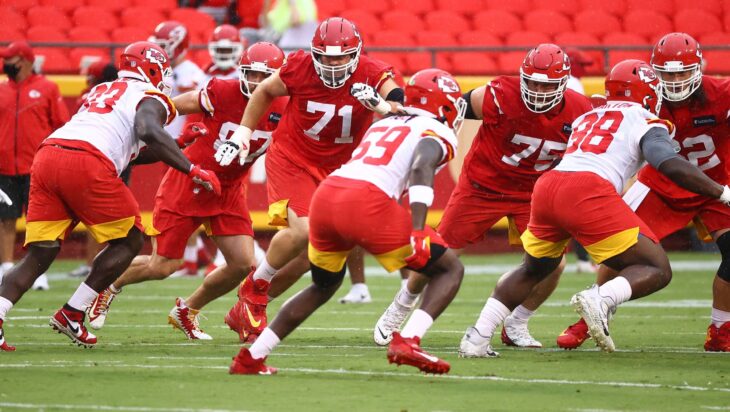 KANSAS CITY, Mo. — Projecting the initial 53-player roster for the Chiefs has never been this difficult with no preseason games, no offseason and few practices with open viewing.

While the 53-player roster remains unchanged for the 2020 season, there are other roster rules changes that definitely impact the construction of the roster. Let’s start with the practice squads, which were set at 10 players in recent seasons. The new collective bargaining agreement increased that number to 12, but the NFL and NFLPA agreed to bump that number to 16 in 2020. Also, up to six players on the practice squad can have unlimited experience.

Teams can also bump up one or two players from the practice squad on game day, effectively creating 53 to 55 player roster for game day. This provides greater flexibility for injuries and potential COVID-19 issues. Those players can then return to the practice squad after the game without clearing waivers. Teams can also carry 47 players on their active game-day roster allowing for carrying eight offensive linemen.

Who will make the initial 53 for the Chiefs? Here’s my final projection based on published reports, interviews and available practice video.

Henne is the team’s clear-cut backup behind Mahomes. Moore filled in admirably for Mahomes last season with Henne on injured reserve, but expect the Chiefs to take advantage of this season’s roster flexibility and sign Moore to the practice squad. Moore isn’t subject to waivers, and he’s made it clear he wants to remain in Kansas City. It wouldn’t surprise at all if the Chiefs keep Ta’amu around as a developmental project, but there are few reps in the season for a fourth quarterback.

Edwards-Helaire should see the bulk of the work with Williams providing relief and filling in as the team’s third-down back and pass protector in the backfield. Washington and McGuire had quiet training camps, but expect one of the veterans to stick around whether it’s on the final 53 or the practice squad.

Keizer took advantage of opportunities given to him by injuries to Seals-Jones and Yelder and seized a job. He looks like a strong complement to Kelce as a blocking tight end with better than average hands. Give the edge to Seals-Jones for the other spot with Yelder coming off a training camp limited by injury.

The top four receivers are set leaving four strong options for likely two more spots. Pringle appears a clear favorite for the No. 5 role, but give Kemp the advantage as a sixth receiver for his strong special teams skills. Fortson might not slip through waivers, but if special teams play the deciding factor in these two roles, Pringle and Kemp have the edge.

The versatility of Remmers allows him to step into any role on the offensive line due to an injury without the group missing a step. Kilgore has yet to practice since arriving with the club late in August, so his projection is a guess at best. Allegretti remains the top prospect on the interior, and Senat gets the edge over Barton as an additional swing tackle behind Remmers. Don’t count out Durant as a practice squad candidate either. If Brett Veach wants to make a waiver wire trade to shore up the cornerback or running back positions, offensive line is currency for a deal.

The loss of Pennel for the first two games will necessitate an additional tackle on the roster, and give the edge here to Lawrence. Lots of positive buzz surrounding both Ward and Wharton, but hard to see them cracking the top of the rotation. Speaks is a wild card; lot of possible outcomes for Speaks, who has yet to meant his second-round expectations. This is another position of depth if the Chiefs are looking for a trade partner before the deadline.

Niemann appears ready for a bigger role in the defense, so don’t be surprised if he’s a starter in the base 4-3 defense and the backup behind Hitchens at mike linebacker. Gay should start out in substitution packages and would expect to see a larger role as the season progresses. O’Daniel’s value comes on special teams. Harris is a sleeper pick for making the 53 out of the box.

Plenty of length and athleticism at the position but short on experience. Ward is an established starter but it wouldn’t surprise to see Fenton lineup on the opposite side, then slide into the slot with Sneed outside in nickel coverages. The Chiefs like Hamilton’s versatility in multiple roles. Keyes needs more seasoning after starting camp with an orbital fracture, but the club has been bringing him along quickly.

This is a group with questions after the top three but defensive coordinator Steve Spagnuolo found success with three and even four safeties on the field at times last season. Thompson appears the likely front-runner behind Sorensen, who should see most of his snaps in the box. Watts still has strong special teams value but needs to prove himself on the defensive side.

No competition here after Townsend beat out Tyler Newsome for the punting duties. The bigger questions will arise with the kick return and punt return positions as the Chiefs look to likely decrease the workload for Hardman as his role on offense rises. Pringle is the likely candidate to see a larger role in the return game.