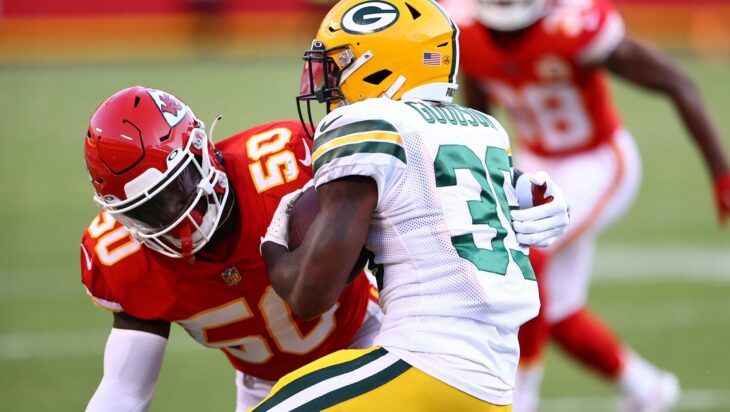 KANSAS CITY, Mo. — It’s a small sample size to be sure but after three preseason games there’s one conclusion that can be drawn about the Chiefs’ starting defense.

These guys might be pretty good, and head coach Andy Reid thinks so too

“I like the speed they’re playing with. I like the communication that’s taken place there,” Reid said after the team’s 17-10 win over the Packers. “There’s a certain confidence that they’re developing in one another that will continue through the
season.”

The No. 1 defense played just two series in Thursday’s preseason finale against Green Bay but it proved a dominating sequence. The Packers went three-and-out on both drives while totaling just 10 yards.

During the preseason, the starting defensive unit played six drives with three resulting in three-and-outs. All six drives ended with punts, and the defense allowed just 91 yards, yielding a scant 3.5 yards per play.

The rookie additions to the defense have been a big part of the success. Cornerback Trent McDuffie was joined in the starting lineup Thursday night by defensive end George Karlaftis and linebacker Leo Chenal. Karlaftis said the progression of himself and his fellow rookie classmates traces back to the work during training camp in St. Joseph.

Blending the rookies and free agent safety Justin Reid in with the returning veterans could have been a difficult task for defensive coordinator Steve Spagnuolo but defense tackle Chris Jones said he sees chemistry developing quickly.

“Playing as one is definitely something that we need to commit to, playing together,” Jones said. “Building that chemistry along the defensive line and along the defense is going to be
huge for our success as a team.”

And Reid thinks the best is yet to come.

“The more familiar they are with each other, the faster they’ll get even yet.”

Chiefs cornerback Trent McDuffie exited the game after making a tackle to end the Packers’ opening drive, and he’s entered the league’s concussion protocol. Defensive end Malik Herring suffered an oblique strain, while running back Jerrion is having an examination on his right knee.

Tight end Matt Bushman suffered a fractured clavicle in the second half after a huge night on the field, catching three passes for 73 yards and a score. The 26-year-old Bushman entered the league last season as a free agent from BYU, sharing that connection with the head coach.

“Bushman’s got phenomenal hands and he’s shown that all through camp,” Reid said. “He was just coming back off of where he tweaked his knee and then he landed on it and you can kind of see the way it was. He was wrapped up and fell on it. I knew, as he did, that something was wrong there with his shoulder.”

Linebacker Darius Harris seemed to do everything he needed Thursday night to secure a roster spot, picking up three tackles in a row. That sequence would have forced a three-and-out if not for a face mask penalty on Joshua Williams that extended the drive.

“I just got off to a hot start,” Harris said. “I knew that it was the last preseason game, and I know just being confident and understanding, all right, this is the last time, the last game, I’ve got to put film together in order to show who I am as a player and as a person.”

Harris has consistently run as the No. 2 Mike linebacker behind starter Nick Bolton, and entering his fourth season with the club he’s also the team’s longest-tenured player at that position. It’s a role that he relishes.

“Obviously a lot is on your shoulder but I feel like I’ve taken the responsibility and I’ve taken the understanding that it’s all on me to get people lined up and get people in the right situation and communicate with everybody,” Harris explained. “Because at the end of the day, I’m in front of that huddle and I’m making a call to those guys and they’re looking at me and trusting me to get them in the right position. I enjoy it, and I know it comes with great work and great study and not taking it for granted at all.”

Harris hopes it’s all enough to land a spot on the active roster following roster cuts on Tuesday.

“I feel like I put enough on film, I laid it all on the line and had my best three games that I could,” Harris said. “I just control what I can control and hopefully I make the 53-man roster and it would definitely be an honor to make the cut and be on the roster this year throughout the entire season.”

Versatility in the trenches

Offensive line coach Andy Heck wants his squad cross-trained to play multiple roles, and seventh-year veteran Austin Reiter experienced that first hand Thursday night when he played right guard in a game for the first time in his career.

“That was different,” Reiter said. “But it was fun.”

The Chiefs took an extensive look at their backup offensive line against the Packers. Undrafted rookie free agent Michael Caliendo lined up at center with the No. 2 line with Nick Allegretti at left guard. That trio has consistently rotated along the interior during training camp practices. Another undrafted rookie free agent, Vitaliy Gurman, also has rotated into that group but played with the No. 3 line Thursday. Prince Tega Wanogho assumed the left tackle role with Geron Christian on the right side with the second-team line Thursday.

“It can only make you better,” Reiter said of the rotation.

It’s 16 days until the Chiefs take the field in Arizona for the 2022 season opener but there’s plenty of work for the players and coaches in the meantime.

Players return to the facility on Saturday after an off day on Friday. The collective bargain agreement provides a three-day break for the players from Sept. 2-4, then it’s time to start preparing for Week 1 on Monday, Sept. 5.

The Chiefs plan to make players and coaches available to the media on Monday and Tuesday. The roster must be trimmed from 80 to 53 players by 3 p.m. central time on Tuesday, Aug. 30. General manager Brett Veach will speak to reporters on Wednesday regarding the initial 53-player roster.