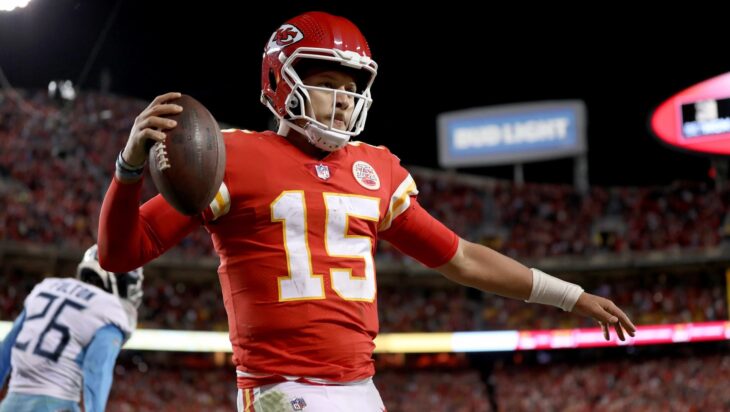 KANSAS CITY, Mo. – There’s no doubt that Patrick Mahomes has had better performances in a Chiefs uniform than he delivered in Sunday night’s 20-17 overtime win over Tennessee. Yet when the chips are down, head coach Andy Reid never has a problem putting the fortunes of his team in the hands of his superstar quarterback.

“You have to be able to win a game like that,” Reid said in the aftermath of Mahomes’ heroics in the fourth quarter and overtime. “Where everything just isn’t perfect and your emotions are up and down and you got to fight through that, preserver through that and be able to rally, some of these guys step up and rally.”

That’s just what Mahomes did against the Titans. With the team’s running back by committee mustering a mere 14 yards on 13 carries, it was up to Mahomes to carry the burden on his shoulders with 84 dropbacks. He finished the game 43-of-68 passing for 446 yards with a touchdown and interception, and he also scrambled six times for 63 yards and a score along with a two-point conversion run.

Yet despite the prolific passing numbers from Mahomes, it was two plays on the ground that defined what the late Terez Paylor described as the “over my dead body game.”

Trailing 17-9 late in the fourth quarter, the Chiefs faced third-and-9 from the Titans’ 14-yard line. Mahomes dropped back to pass and looked left to throw but quickly saw nothing available. He bolted out of the pocket to his right, side-stepping a tackle to reach the first-down line and then backing his way into the end zone sandwiched by two defenders

“On the touchdown run, I probably could have just thrown it to JuJu (Smith-Schuster) but I had like fully committed to run at that point. We were just battling at the end of the game. We were just trying to find a way to win and our defense kept us in the game long enough to do that.”

But Mahomes wasn’t done. After penalties nullified back-to-back failed two-point conversion attempts, the third try was the charm, and again it was the quarterback doing all the heavy lifting.

Mahomes dropped back for a third time to try for a two-point conversion and seeing nothing available he once again took off for the end zone. Running back Jerick McKinnon delivered a key block to seal the edge, and the Chiefs tied the game.

Or as Mecole Hardman put it, another case of “Pat being Pat.”

“He did a good job with his legs and extending plays and getting into the end zone – so he did great,” Hardman said. “He’s Pat and Pat gone be Pat and so can definitely count on him in those situations.”

The Chiefs stand 6-2 thanks to Sunday night’s win, putting them in a tie with Buffalo atop the AFC playoff picture. The Bills own the tie-breaker over the Chiefs by virtue of their 24-20 win over Kansas City in Week 6. The Bills fell to the New York Jets on Sunday 20-17.

That makes the win over the Titans all the more crucial to Mahomes.

These are games you’re going to need if you want to try to win the Super Bowl,” Mahomes said. “Obviously, we want to be that high flying, scoring every time we’re out there on the field but I think with the schedule that we’ve played we’ve won all different type of ways against a lot of great football teams so we show that we can do it in different ways, but we have to keep it going.”