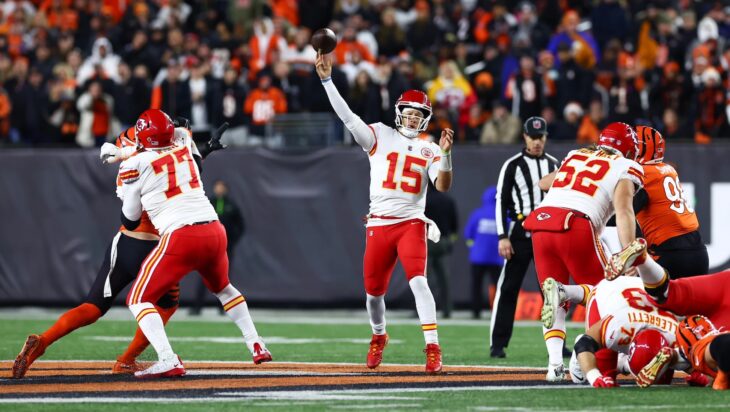 KANSAS CITY, Mo. — The Chiefs had a full house for Wednesday afternoon’s practice, and that includes quarterback Patrick Mahomes who was last seen limping off the field after his final play against the Cincinnati Bengals on Sunday.

Mahomes said his bruised foot “felt good” after a few days of rest.

“You always deal with bruises and little things in the NFL season, and so luckily for me it’s just a bruise and something I can kind of bounce back from and be out there at practice, and keep getting better like we’re trying to do,” Mahomes said.

Linebacker Nick Bolton (groin) and wide receiver Kadarius Toney (hamstring) were limited in Wednesday’s workout while Mahomes and the rest of the team were full participants.

“I’m going to let him get out there and work a little bit and just see how he does,” Reid said. “We’re not going to bring him back and have him hurt it again, I think that’s not what we’re looking at. Just see what he can do.”

Left guard Joe Thuney, who also missed the last two games due to an ankle injury, was also a full participant. Thuney was listed as a full participant last week before the club downgraded him to questionable on Saturday and scratched him from the lineup on Sunday

Reid said Thuney didn’t have a setback with his ankle but was still struggling to get “that final push that you get off of it in the run game.”

“It’s day-to-day, so he feels better this week than he did last week, and I just thought that he’s made as much progress he has, let’s just get him a little bit more time, so that’s where I was at the end of last week.”

It’s the time of year when many players deal with nicks and bruises, and the Chiefs are no exception. The club listed 14 players on last week’s injury report with Thuney, Toney and safety Deon Bush (elbow) sitting out due to injuries against the Bengals.

Reid also provided an update on wide receiver Mecole Hardman, who has missed four games due to an abdominal illness. Hardman remains on injured reserve and isn’t eligible to return until after Sunday’s game against the Broncos but Reid said he’s making progress.

“He’s doing well,” Reid said “He had lost some weight, he’s put the weight back on which is good and he’s out running now. He’s getting close.”

Reid said there’s a chance Hardman could return next week against the Houston Texans.

“Give him a couple of more days here we’ll see,” Reid said.