KANSAS CITY, Mo. — Chiefs quarterback Patrick Mahomes found himself the victim of an aggravated robbery in Texas two weeks ago, and back in Kansas City for offseason workouts he expressed relief no one was hurt in the incident. 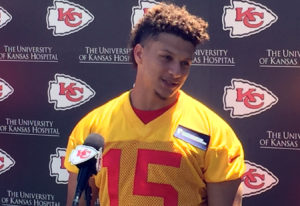 The robbery took place May 12 in  Tyler, Texas. Smith County sheriff Larry Smith said during a press conference he believed the robbery was a random act.

Mahomes and several friends where standing in the driveway of a home when a car pulled up along side them, according to the arrest affidavit. The suspect allegedly told the victims he had a gun while demanding their wallets, shoes and beer.

Mahomes and his friends complied with the suspect’s demands and called 911 after the suspect left.

Pinkerton was charged with aggravated robbery and held on a $50,000 bond.

Mahomes expressed relief that the suspect is in custody and hopes to never relieve such as harrowing situation.

“Hopefully it never happens again,” Mahomes said. “I’m must glad the police got the guy so I don’t have to worry about that anymore.