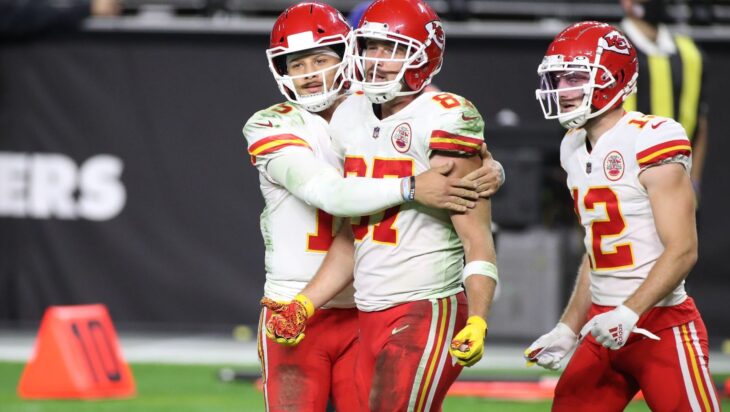 Patrick Mahomes had only one thought racing through his mind as he took the field with the Chiefs trailing 31-28 with 1:43 left on the clock and one timeout remaining in the bank.

“That we’re going to score,” Mahomes said. “I just didn’t know if it was going to be overtime or we were going to win it.”

Win it the Chiefs did, with Mahomes firing a 22-yard strike to Travis Kelce with 28 seconds left, sending the team to 9-1 on the season and a commanding three-game lead in the AFC West.

The game-winning drive illustrated once again how lucky the Chiefs are to have Mahomes in the pocket, head coach Andy Reid said.

“When you’re behind, he can make things happen,” Reid said. “He sees, he’s got great vision. He’s got guys, who believe in him, around him and work like crazy to get themselves open.”

The game-winning play wasn’t designed to go to Kelce. Tyreek Hill was the primary receiver coming out of the slot on the left side. Mahomes scrambled to his right with the intention of looking back to Hill to see if he beat the coverage from cornerback Damon Arnette. But when Mahomes escaped the pocket, safety Johnathan Abram vacated his zone to stop the scramble.

“I saw the safety was running at me like I was going to run the ball and I saw Travis wide open in the end zone,” Mahomes said. “I just tried to put it on him as quick as possible because I knew that was the game-winner.”

Kelce said he initially got fooled on the coverage but once he reached the second level he sensed an opening on the opposite has in the end zone.

“Might as well go where the void is,” Kelce said. “I feel like I see and I feel what Patrick sees back there in the pocket sometimes. Sure enough, it was right on the money.”

The ever-tricky Chiefs offense added a new wrinkle to the quarterback motion play catalog, adding in Travis Kelce in a Wildcat package.

“Slot Machine Right” is a variation of the “Ferrari Right” play the Chiefs used two weeks ago for a touchdown against the Carolina Panthers. This time Mahomes went in motion to the right with Kelce lined up in the backfield behind center.

Kelce took the direct snap and rolled to his right before flipping the ball underhand to wide receiver Byron Pringle on a bubble screen. This play only netted a 3-yard, as opposed to its predecessor that resulted in a 1-yard touchdown pass from Mahomes to Demarcus Robinson.

“I was hoping we would hit all sevens on that son of a buck, man,” Kelce said. “Doggone. Pringle was out there just trying to make a play, sure enough, we got some positive yards, which is the best.”

It was the second pass for Kelce in his career after an interception against the New York Giants in 2017. Mahomes, no stranger to the underhand pass himself, said Kelce executed the play well.

“He was able to sell it, get the underhand throw on that inside shoulder and give Pringle a chance,” Mahomes said. “We actually had it designed to be a little tighter. I think if we had been able to get it a little tighter, we would have got that touchdown.”

The Chiefs have already run a couple of variations of the quarterback motion – could another option be in the works? Mahomes seems to think so.

“I was even open a little bit in the flat if (Kelce) wanted to sling it out there as well,” Mahomes said.

Safety Juan Thornhill has played fewer snaps since lining up on all 55 plays against Buffalo in Week 10, and that trend continued again on Sunday night against Las Vegas. Thornhill played primarily in nickel and dime coverages as a single high free safety with Tyrann Mathieu and Dan Sorensen taking part in virtually all coverages.

All part of the plan, Reid says.

Thornhill suffered an ACL tear in last year’s season finale and started training camp on the physically unable to perform list. After playing just 64 percent of defensive snaps in Week 1 against Houston, Thornhill played more than 90 percent of snaps in the next five games. He played just 68 percent of the defensive snaps against Denver in Week 7, followed by 84 percent against the New York Jets in Week 8 and 81 percent against Carolina in Week 9.

The Chiefs emerged from Sunday night’s win relatively unscathed with Reid reporting only a single injury after the game. Pringle hurt his left ankle and left the game in the second half but later returned to the contest. He started the game with Sammy Watkins out and Mecole Hardman returning the active roster on Saturday from the COVID-19 reserve list. Pringle finished with three catches for 17 yards.

Quote of the Day

“I’ve got Pat Mahomes, so you give me a minute and a half and I’m pretty good right there. We can roll.”
– Reid on whether he considered letting the Raiders score late in the fourth quarter to provide his offense with more time for a potential game-winning drive.

The Chiefs get back to some semblance of normal following the bye week and a Sunday night game. They return to the practice field on Wednesday to begin preparation for their Week 12 trip to visit the Tampa Bay Buccaneers. The game kicks off at 3:25 p.m. central time with the showdown between Mahomes and Tom Brady made for national television as the only late afternoon game on CBS.