KANSAS CITY, Mo. — The sun blazing down on a cloud-free day shone a spotlight on the man at the center of Kansas City’s rookie minicamp Saturday. A total of 69 players lined to show their skills to coach Andy Reid and his staff, but first-round draft pick Patrick Mahomes owned center stage. 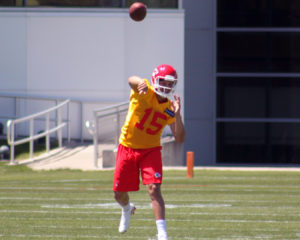 “Everything won’t be pretty today, but he’ll do alright,” Reid said. “You’ll get an idea of what he’s all about.”

Indeed, Reid proved prescient. Mahomes displayed the dazzling fastball that gives Chiefs coaches and fans alike hope that the quarterback of the future has arrived, but it wasn’t all champagne and roses for the rookie.

There were first-day jitters for sure. Some throws missed their target. Mahomes threw high and low as well as overthrown, but frequently on line and always with plenty of mustard. Reid occasionally called halt to a play before it started to instruct his pupil on getting everything right before the snap.

“It’s a lot more than I had Texas Tech, but we’re learning as we go and just getting better every single rep,” Mahomes said.

But Mahomes also displayed the physical talents that motivated the Chiefs to move up to draft him at No. 10 in last week’s NFL draft. His delivered throws with speed and demonstrated an ability to throw on the run and use his legs to extend plays.

“One of the strengths of his game is his creativity when he leaves the pocket,” Reid said. “However he gets that ball out, he gets the ball out. We’re going to give him some fundamentals that he can work on and then you go from there. The bottom line is that the ball is being complete.”

Reid and offensive coordinator Matt Nagy put Mahomes to work immediately calling plays just as he would in game. Nagy relayed the play call to the quarterback via the radio in his helmet, and then the rookie repeated the play back to his teammates in the huddle.

Mahomes said the process of calling and know the right play proved his most difficult challenge on day one.

“But whenever I got out there and called it, I had to look out, see the guys and make sure everyone was in the right position,” Mahomes said. “That was the process which was a lot harder than I thought it was going to be.

Mahomes said he received his playbook Friday night, and immediately began absorbing as much as can.

“It’s a ton of writing down,” he explained. “I’ll write the same play down three or four times until it sticks in my head. That’s the biggest thing for me. I will use notecards and go through the formations and stuff like that.”

Reid said he may open up the playbook a bit more than normal to test the rookie’s skills.

“He’s a smart kid, so it might be a couple more than maybe what might have if he didn’t have that,” Reid said. “But you try to find a balance where you’re still challenging him but he can function.”

Fellow rookie Kareem Hunt said he and Mahomes have already struck up a relationship. He’s impressed with what he’s seen from his new teammate so far.

“He is a good leader it seems like for the most part as I’ve known him,” Hunt said. “Good personality, definitely a strong arm and just a guy who looks like he could be a good leader.”