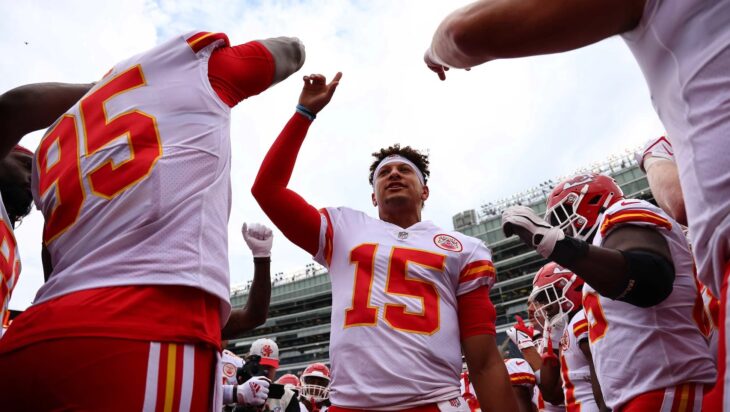 Patrick Mahomes played just one series and 11 plays in the Chiefs’ preseason opener in Chicago against the Bears on Saturday, and he had two items to check off his wishlist in his first action of the 2022 campaign.

He wanted to lead a scoring drive, and he wanted to take his first hit — he just didn’t want it to be quite as hard as the helmet to the midsection delivered by Bears defensive end Trevis Gipson early in the first quarter.

“I was hoping I got hit and fell, just kind of off to the side,” Mahomes told the team’s television broadcast audience. “Not the direct helmet to the stomach and then him land on me. But it was a good drive and I’m glad that we got it out of the way, got that touchdown, and that we can build on that.

There was nothing dirty about the hit, however, and it didn’t stop Mahomes from completing a 19-yard pass to tight end Travis Kelce. Mahomes said he felt no ill effects from the collision.

“I wanted that first hit, I got hit hard,” Mahomes said. “He caught me right in the stomach, right between the rib pads. It was a nice first one to take, and it will make me better for sure.”

Mahomes was sharp in his limited action, completing 6-of-7 passes for 60 yards, culminating the drive with a 5-yard touchdown pass to tight end Blake Bell. Each of his six completions targeted a different receiver, illustrating the depth Mahomes says the team has developed during training camp.

“Every guy seems like has a great day kind of every other day,” Mahomes said. “You can have Mecole (Hardman) have a great day, and then you have Marquez (Valdes-Scantling), and then you have JuJu (Smith-Schuster) and Skyy (Moore), it kind of keeps going. When you have an offense like that, it will be hard for defenses to account for who’s going to get the ball because we’re going to put the guys out, let them run the routes, and whoever’s open is open.