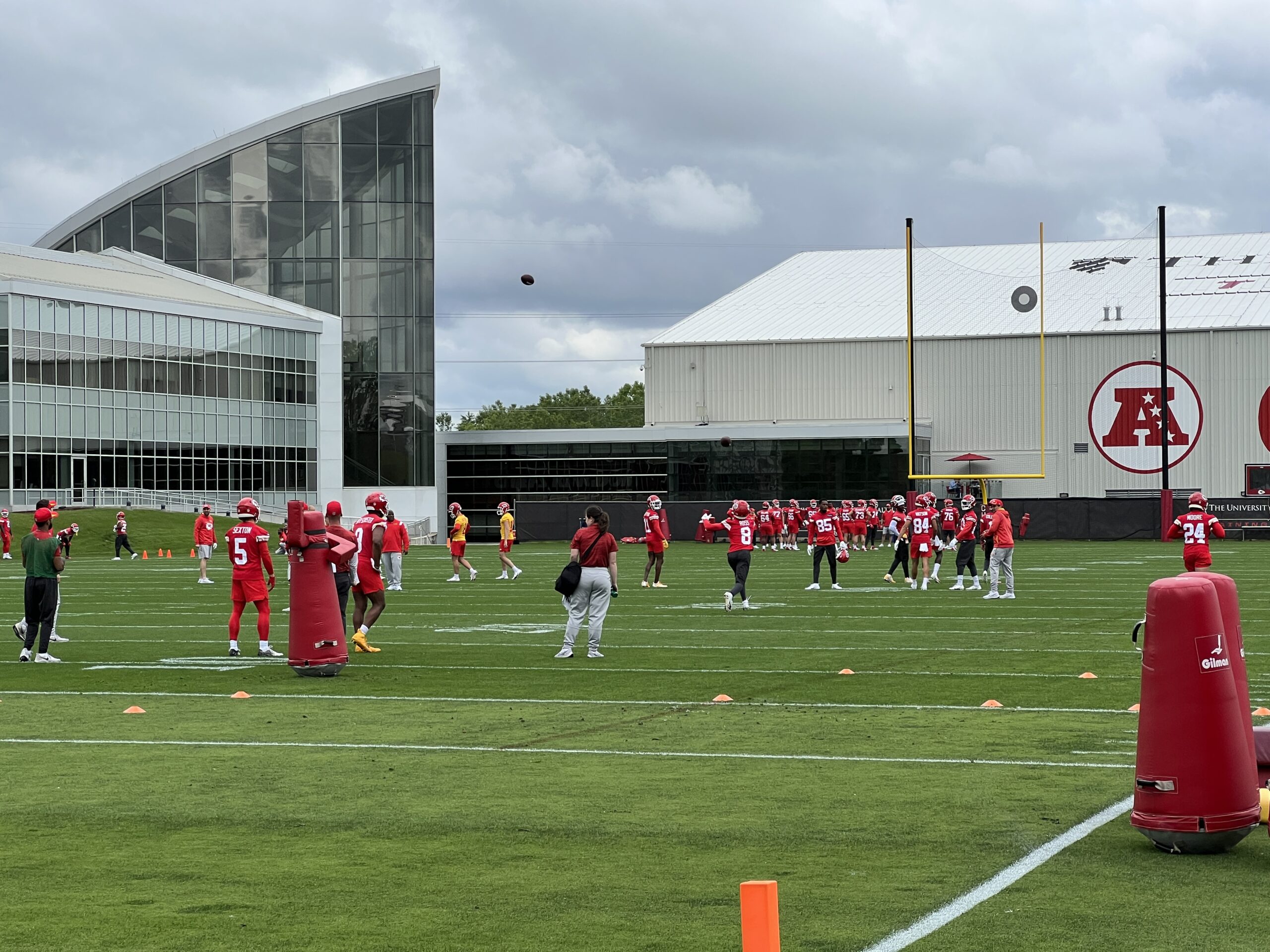 KANSAS CITY, Mo. — The Chiefs offseason launched in earnest with back-to-back practices culminating on Thursday, and head coach Andy Reid says he’s seeing immediate results from changes he made to the team’s routine.

“We’re getting these positive practices right now with a tremendous amount of energy,” Reid said.

Normally the team would have gathered en masse back in mid-April for Phase I of the NFL’s offseason program. But taking a cue from the past two seasons with changes necessitated by COVID-19 protocols, Reid altered his club’s usual calendar.

Instead, players and position groups met virtually rather than in person. Players rehabbing injuries and others who wanted to work out could still visit the facility. But quarterback Patrick Mahomes and most of the team’s position players worked out together in Texas.

The benefit, Reid reasoned, was that players could get more work done on their own in a premium training setting rather than participating in the NFL’s offseason program, where football drills and team workouts are more restricted under the league’s offseason rules.

“You can see that they got things done,” Reid said. “I think from my standpoint to them, it shows some trust that I have in them. It’s a long season that we’ve put together over the last few years, which means it’s a short offseason. I think sometimes it’s not bad just to step back an inch, and then you guys felt the energy out there today, it’s ridiculous right now.”

Mahomes worked out in Texas over the course of a month with players shuffling in and out as their schedules allowed. It also provided Mahomes with an invaluable opportunity to build chemistry with his new teammates.

“Working out with them, throwing with them, we go to lunch, go to dinner, stuff like that, you kind of build that chemistry, and I think a big part of especially our offense is having that chemistry on the field,” Mahomes said. “Being able to know what the guy is doing without needing to talk about it. I think it’s translated. So far in the practices that we’ve had, we think we’re on the same page and kind of having chemistry and we’re going to keep building on that.”

Tight end Travis Kelce said he took part in the Texas workouts for two weeks. He felt it helped himself and his teammates to “get guys rolling a little bit quicker” when the full squad arrived in Kansas City.

“(It) got us acclimated as teammates,” Kelce said. “The chemistry was already there. Great guys are coming into the building. From there, it’s just figuring out how Coach Reid wants to utilize us all. That’s where we’re at right now with the new guys.”

(Disclaimer: reporting rules for the club’s closed practices prohibit the disclosure of certain information including but not limited to depth charts, formations and play design).

Grey skies and temperatures topping out in the low 60s greeted the Chiefs on Thursday for their 11:10 a.m. organized team practice activity (OTA), which concluded at 1 p.m. The session featured a group installation, individual drills and special teams work in addition to 7-on-7 and team periods. Rain, fortunately, held off until after practice but moisture still caused traction problems for receivers and defensive backs on occasion.

Offseason practices are largely a passing camp, as Reid likes to say, but the defense came up with some highlights of their own on Thursday. During a find the window drill, linebacker Willie Gay Jr. skied high over the middle to tip a pass from Mahomes with fellow linebacker Nick Bolton diving to make the interception.

The team’s wide receiver room has a wide-open competition featuring established NFL veterans, experienced players looking to jump-start their careers and young talents with room to develop. An indicator of the depth of the receiver group and the state of the competition is the liberal rotation the club used at receiver with many players rotating through the lineup.

The most consistent performer of the day at receiver illustrates that depth. It wasn’t one of the boldface names but rather Omar Bayless who impressed the most on Thursday. Bayless showcased reliable hands and an ability to get open. Second-year receiver Cornell Powell also demonstrated more confidence than he showed during last year’s offseason and training camp.

Mahomes couldn’t resist showing his new receivers the no-look pass. During the 7-on-7 period, Mahomes looked off the defender by staring over the middle while whipping a quick pass to Marquez Valdes-Scantling, who nearly fell for the fake himself before reaching back to his left to secure the catch.

Two of the day’s best highlights came during red-zone work in the final team period with Mahomes showcasing his finely tuned touch along with his blazing fastball. First up was a deftly thrown pass displaying perfect touch and timing on a corner route run by receiver Justin Watson. Mahomes followed that up on the next play with a laser throw on the run to his left into the hands of receiver Cornell Powell on a comeback route along the left sideline.

In a crowded competition in Kansas City’s rebuilt wide receiver room, Justin Watson has quickly established a strong rapport with Mahomes. “Watson has been a pleasant surprise for me,” Mahomes said. “That dude can roll.”

Watson spent the past four seasons with Tampa Bay, hauling in 23 catches for 258 yards and two scores in 40 games. He made a name for himself on the collegiate level as a three-time first-team All-Ivy League performer at Penn. Watson joined the Chiefs on a reserve/futures deal in February but put himself on the radar of Mahomes this spring.

“I remember he came down to Texas and I threw with him the first day, and I called (general manager Brett) Veach and I was like, ‘Wait, how fast is this guy?'” Mahomes asked. “Because he was running so fast that I was late on all my throws.”

Watson posted a 4.44 40-yard at his pro day in 2018, showcasing his speed. He was a key special teams performer in Tampa Bay, and in 2020 became the first offensive player in Buccaneers history to record a sack when he brought down Carolina punter Joseph Charlton on a fake punt.

This time of year is key for players such as Watson to build trust with Mahomes if they want to make a roster bid this summer. His touchdown catch during the team period will be key to that goal.

“We have a lot of talent in that (receivers) room,” Mahomes said. “We have reps like this where we were rotating a lot of different receivers in, you get to see the guys step up and make plays. Today he made a big play in the corner of the end zone. It is important to have these guys, let them get chances and when they get their chances they’re going to go up and try to make the most of them.”

Left tackle Orlando Brown Jr. is not in attendance during OTA, and that’s not a surprise. He remains without a contract for the 2022 season after the Chiefs applied the franchise tag on him back in March. Brown is currently without an agent, and Reid expects contract talks to heat up once the player decides on representation.

“He’s still working to get an agent is what he’s doing, he’s interviewing these different people,” Reid said. So once he gets that taken care of we’ll be able to roll. I know he’s working out down in Florida, he is getting his workouts.”

The NFL’s offseason program is voluntary, except for next month’s mandatory minicamp, and transparency is often lacking when it comes to why players may not be in attendance for a portion or even the entirety of OTA workouts.

Reid said his team is dealing with a few injuries, sicknesses and muscle pulls but none raising concern at this point in the calendar.

“Nothing that is big, and it is the offseason, so I’m just going to kind of leave it at that,” Reid said after Thursday’s practice.

A total of 76 players took part in Thursday’s practice. Three players attended practice but did not participate. Cornerback Rashad Fenton is continuing to rehab a shoulder, and he was joined on the sidelines by offensive lineman Prince Tega Wanogho (undisclosed). Rookie defensive lineman Kehinde Oginni Hassan also observed practice, but Reid indicated that’s due to paperwork regarding a work visa for the native of Nigeria.

Among the other 11 players not in attendance on Thursday, Reid said wide receiver Mecole Hardman tweaked his hamstring on Wednesday and was held out as a precaution. Offensive tackle Lucas Niang is continuing to rehab from a patella tendon injury.

In addition to Brown and Henne, other players not seen at practice on Thursday were wide receiver Daurice Fountain, tight end Mark Vital, defensive end Frank Clark, defensive tackles Chris Jones and Khalen Saunders, linebacker Jermaine Carter and safety Juan Thornhill. Reid did not elaborate on the reasons for their absences.

“He’s healing up and getting better,” Reid said. “He’s doing some of the things versus air out there, so he’ll be all right. (The knee) needs to be a little bit stronger and he’ll be good to go.”

Tight end Jody Fortson officially signed on Thursday his one-year contract for the 2022 season. The Chiefs offered a one-year tender to Fortson in February as an exclusive rights free agent. He’s slated to make $825,000 this season.

Chiefs players haven’t quite finished shuffling uniform numbers this offseason. While the club previously announced changes including linebacker Nick Bolton moving to No. 32 and rookie linebacker Leo Chenal flipping to No. 54, two other players also have new numbers.

Newly arrived cornerback Lonnie Johnson was initially also assigned No. 32, the number he wore in Houston during the 2019-20 seasons. He has now moved to No. 1, the same jersey he wore last season for the Titans. Another change, of course, could be on the way. Johnson and wide receiver Corey Coleman share No. 1 for now, which means one would change if both make the 53-player roster

Buechele last season wore No. 6, which now belongs to second-round safety Bryan Cook, who wore that number in college at Cincinnati. Buechele flipped to No. 8. Buechele shares No. 8 with receiver Justyn Ross. That could create a minor inconvenience during the preseason since two players with the same number cannot appear on the field at the same time.

After concluding the first two of nine scheduled OTA workouts in Phase III of the NFL’s offseason program, the Chiefs get back on the practice field Tuesday, May 31.

The team has practices set for Tuesday, Wednesday and Thursday next week. Thursday’s practice is the only session open to the media, and selected assistant coaches are scheduled to meet with reporters.

The club finishes its OTA workouts with a four-day session June 7-10. The offseason program concludes with the mandatory minicamp June 14-16. None of the offseason practices are open to the public.