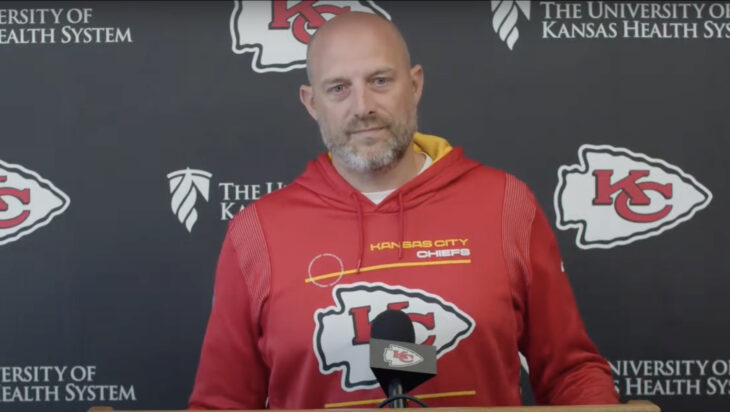 “It’s a homecoming,” Bieniemy says, who is sharing a workplace again with Nagy for the first time since the end of the 2017 season.

More than four years later and the job titles and roles may have changed, but it’s Reid, Nagy and Bieniemy back together on the Chiefs practice field, putting their heads together figuring out how to restore luster to an offense coming off a disappointing postseason loss and the departure of playmaker Tyreek Hill.

Reunited, and it feels so good, Nagy says.

Nagy returns as the team’s quarterbacks coach, a position he held during his first stint with the club from 2013 through 2017, with the additional title of senior assistant. He spent the past four seasons in Chicago as the Bears’ head coach, but that departure didn’t mean a pause in the friendship between himself and Bieniemy.

“Nags is my guy,” said Bieniemy, who is entering his fifth season as offensive coordinator. “Me and Nags stayed in contact the whole time he was a head coach at Chicago, so it’s been great having him back here.”

While the 30,000-foot view of the Kansas City offense often portrays Reid as the man behind the curtain pulling all the strings. The reality is that creating the scheme and building game plans has always been a collaborative process including Reid, his offensive coordinator, other assistants and even the quarterbacks and players themselves.

“That’s the beauty of what we do,” Bieniemy said, “and what’s why I believe we’ve been special over the past decade or so because of the input that we allow. And I think what it does, it allows us to put the organization and the team first in making sure that we’re putting our players in the best situation to go out and be the most productive.”

Just like the best bands where members may move in and out of the lineup over the years, the Chiefs have seen the likes of Doug Pederson, Brad Childress and Mike Kafka spend stings with Bieniemy, Nagy and others.

Yet the Chiefs offense may have arguably been at its peak creativity when Reid, Bieniemy and Nagy were all in the room together.

“I think the respect that the guys have for each other I think is the main thing,” Reid said. “They get along. Is there one thing? No, I wouldn’t say there was one thing, but I can tell you there’s no friction, jealousy, any of that going on.”

Last season, the Chiefs offense was challenged both physically and creatively. Defenses continued throwing new looks at Mahomes and company, and the challenging expects to continue in 2022. That’s where Bieniemy hopes a fresh set of eyes from Nagy can help the club find solutions that may have escaped them last season.

“When you talk about situational football, different situations that he’s been presented, opening new ideas to us on how to view things,” Bieniemy said. “Just different things on how to scheme and how to attack things. There’s a lot of things that Nags brings to the table just because of that experience that he has. Then on top of that, he’s just a hell of a coach.”

It’s not lost on Nagy the situation in which he finds himself and the opportunity in front of him.

“Now to come back four or five years later and see in that room how much Patrick has grown, it’s amazing,” Nagy said. “It gives me chills to talk about it because I also know his ceiling is even higher, and that’s exciting for all of us.”

Mahomes did not participate in Thursday’s practice after taking part in The Match Wednesday night in Las Vegas, and the defense took full advantage of his absence. Receivers Mecole Hardman, JuJu Smith-Schuster and Daurice Fountain were also not on the field for the offense.

The 1-hour, 50-minute workout took place under ideal conditions with sunny skies and the temperature maxing out at 71 degrees. Moisture left over from heavy rains earlier this week seemed to make for occasional slick surfaces for speedy players making quick changes in direction but otherwise, conditions appeared optimal.

Justin Watson continued his strong offseason performance with a deep catch down the left sideline during a skeleton drill, connecting with quarterback Dustin Crum. Moments later undrafted rookie defensive back Nasir Green made a spectacular defensive play, tipping a Crum pass from a receiver and making a juggling interception while diving to the ground.

During the team period, the defense had a strong day with some boldfaced names missing from the offensive side of the ball. The offensive line struggled with protections on occasion, especially with coordinator Steve Spagnuolo’s defense testing some blitz packages.

The offense came away with one big play when Crum found undrafted rookie running Jerrion Ealy completely wide open in the flat for a long touchdown play.

But the defense quickly restored its dominance on the next two plays. First up, fourth-round cornerback Joshua Williams tipped a Chad Henne passed and secured an interception. Then on the next snap defensive tackle Tershawn Wharton swallowed up a screen from Henne to Clyde Edwards-Helaire, wrapping up the running back immediately after the catch.

During the 2-minute period finishing practice, the offense moved the ball quickly downfield thanks to a defensive pass interference penalty on Williams. But the defense secured the win thanks to a first-down sack by blitzing safety Deon Bush and a fourth-down sack by safety Juan Thornhill.

The second-team offense proved more successful, moving across midfield with gains by running back Derrick Gore and receiver Omar Bayless. That set up a field goal by Harrison Butker from beyond 50 yards, which he boomed down the middle of the uprights with plenty of room to spare.

While Nagy is a familiar face joining the offensive staff, it’s a newcomer to the defensive coaching staff tasked with beefing up production from the team’s front four in 2022.

Joe Cullen, 54, joined the Chiefs this offseason as defensive line coach, a position he’s held with the Jaguars, Browns, Buccaneers and Ravens during a 22-year coaching career in the pro and college ranks. He spent last season as defensive coordinator for the Jaguars. Cullen replaces Brendan Daly, whom Reid moved to linebackers coach during the offseason.

“I was able to move Brendan up and then Joe, he’s got a great track record as a defensive line coach,” Reid said. “We didn’t weaken things, we’ve got a good strong core of coaches.”

“Those were two of my favorite guys when I was at another place when they were coming out,” Cullen said. “I expect those guys to have career years and play the best they have in their career. And if we do that, that will elevate the whole team, and I expect that.”

Cullen and Spagnuolo both favor schemes with multiple defensive fronts but don’t expect the Chiefs to move away from the base 4-3 defense. Cullen also made it clear that he views Jones as an interior player, a departure from last year’s experiment with Jones playing on the edge.

“I think when Chris is on his game there is not a better defensive tackle in the NFL,” Cullen said. “You saw that in the championship run. There will be different spots he’ll move around within the nature of the scheme, and I’m excited to get him in here and get rolling.”

Cullen also counts himself a big fan of first-round edge rusher George Karlaftis, calling it “a no-brainer” when the Chiefs nabbed him at No. 30 overall.

“He’s a throwback, he’s an old school (player),” Cullen said. “Goes hard every single play he’s on the field, he wants to get better in everything he does, and I’m just really excited we have him here.”

Beyond a handful of known health issues, Reid continues to defer on questions about injuries and generically attributed sore hamstrings as the reason for some unexplained absences from the voluntary workouts.

“Whoever wasn’t out there, they had some hamstring (issue),” Reid said. “It’s offseason, I never do the injuries in the offseason.”

Hardman is among those known to have tweaked his hamstring last week. Cornerback Rashad Fenton (shoulder) and offensive tackle Lucas Niang (knee) have yet to practice this offseason during their rehab. Although he officially hired an agent on Thursday, franchise-tagged left tackle Orlando Brown remains unsigned and absent from workouts.

According to the NFLPA public salary cap report, the Chiefs have $14,543,669 in available cap space, which ranks as the eighth-most space in the league. That number includes Brown’s franchise-tag tender offer of $16.662 million. Only a team’s top 51 contracts count toward the salary cap during the offseason.

Thursday marked OTA practice No. 5 in the books for the Chiefs this offseason, leaving the club just two weeks away from the completion of their offseason program.

Players return to the field on Tuesday for four more workouts June 7-10, which closes the voluntary portion of the offseason. The club hosts its mandatory minicamp June 14-16. None of the offseason practices are open to the public.