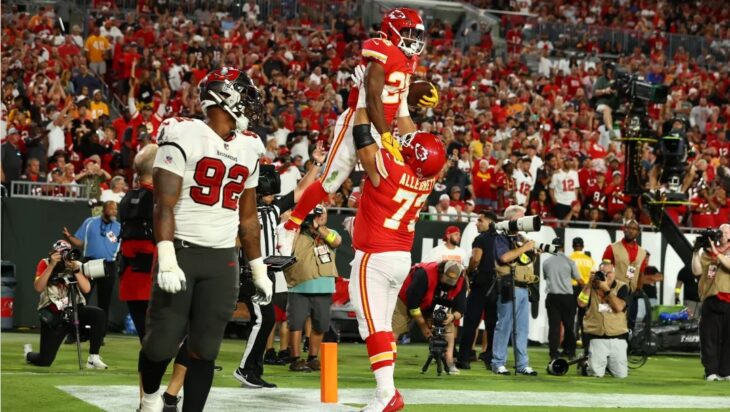 In the wake of a disappointing loss to the Indianapolis Colts last weekend and amidst trash-talking from Tampa bay linebacker Shaquil Barrett heading into Sunday night’s game, Kansas City’s offensive line felt the heat from fans, coaches and even themselves.

Sunday night’s 41-31 win over the Buccaneers earned the group redemption in the eyes of quarterback Patrick Mahomes.

“They accepted that challenge and they went out there, and when they dominate like that, it makes my job a lot easier.”

The Chiefs struggled on several fronts last week in Indianapolis but the most disappointing for head coach Andy Reid was the lack of production in the run game. The team rushed for just 58 yards against the Colts with Mahomes leading the way with 26 yards. The club’s running backs netted only 31 yards on 18 carries with Clyde Edwards-Helaire stymied to zero yards gained on seven attempts. Struggles in short-yardages situations contributed to a dismal 3-of-10 performance on third down.

Center Creed Humphrey said he tried not to focus on the negatives during the week but it was hard to avoid, especially after Barrett predicted a “coming out party” for the Tampa Bay pass rush against the Kansas City offensive line.

“We knew we had something to prove after last week, we probably didn’t play our best,” Humphrey told KSHB in a postgame interview. “We wanted to come and prove something tonight.”

Reid didn’t mince words about the team’s performance against the Colts last week.

“Listen, we stuck it up last week,” Reid said after Sunday’s game. “We all knew that, we admitted it to you, we didn’t play the way we should play.”

During the week of practice leading up to Sunday night, Reid laid down the gauntlet with his offensive line. In the words of Mahomes, it was time to “play big boy football.”

Edwards-Helaire said there was a sense of urgency amongst the offense all week long.

“We all know everything starts with the big guys up front, and that was something that coach Reid started the week off challenging those guys,” he said. “We all know how it all unfolds. Once he challenges those guys, he’s challenging all of us.”

The offensive line indeed answered the challenge against the Buccaneers, paving the way for a rushing attack that piled up 189 yards on the ground while averaging 5.1 yards per carry.

Most importantly, the offensive line earned the praise from their head coach.

“I was proud of the offensive line for the job that they did,” Reid said. “They had a certain mindset about them, and they came out and presented that for four quarters.”

3 and -3: The Buccaneers mustered just 3 rushing yards in six carries against the Chiefs defense, with Leonard Fournette rushing for minus-3 yards on three carries. The 3 rushing yards by the Buccaneers tie the Chiefs’ franchise record for the fewest rushing yards allowed in a game, matching the 3 yards allowed against the Chargers on Nov. 19, 1961. The Chargers won that game 24-14 over the then Dallas Texans. The 3 yards rushing is the second-lowest in franchise history for Tampa Bay, which rushed for 1 yard in a 32-28 loss to Washington on Oct. 22, 1989.

12: The Chiefs converted 12 third-down attempts in 17 tries against the Buccaneers, matching the franchise-best total in a game during the past 32 seasons. That matches the 12 conversions the team picked up in a 41-20 win over Cleveland in Week 10 of the 2003 season and in a 27-20 loss to New England in the 2015 Divisional Playoff. Complete records for third-down conversions are only available going back to 1991.

67: The number of regular-season games it took Mahomes to reach 20,000 yards passing is the fastest in NFL history. It took Matthew Stafford 71 games to reach that plateau followed by Dan Marino in 73 games. Aaron Rodgers took 74 games to get there. Tom Brady, who leads the NFL with 85,578 yards passing in his career, took 89 games to reach 20,000. Mahomes also has 162 touchdown passes in his first 67 career games, which is two more than Dan Marino had. Third place for most touchdown passes in the first 67 games of a career belongs to Aaron Rodgers and Andrew Luck with 126.

9,328: Regular-season receiving yards by Travis Kelce, who moved into fifth place all-time for tight ends on that leaderboard Sunday night. Kelce passed Rob Gronkowski (9,286) and now has his sights set on the No. 4 spot, currently held by Shannon Sharpe with 10,060 yards.