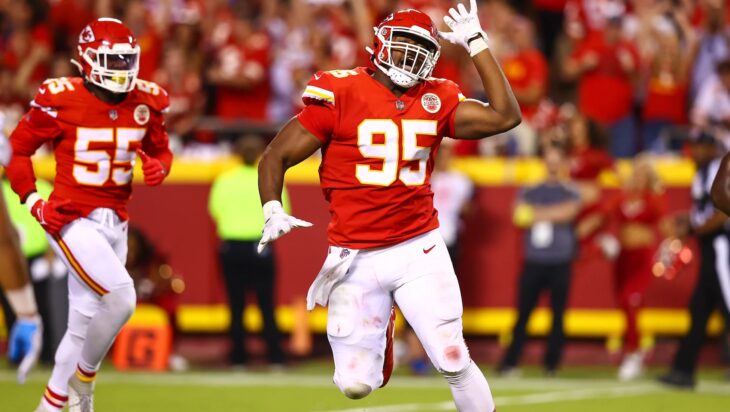 KANSAS CITY, Mo. – The Chiefs found themselves in unfamiliar territory in the first half of Thursday night’s contest against the Los Angeles Chargers. They trailed by 10 points before heading into halftime trailing 10-7, but head coach Andy Reid said he didn’t have to say much to his squad about reversing their fortunes.

“The guys, we felt like we were shooting ourselves in the foot,” Reid said. “We had a couple of hiccups on offense, we didn’t do the right thing a couple of different times and it cost us in big situations. We felt like if we could get back on track offensively, eliminate some of the mistakes, we’d be OK.”

Eventually, they were indeed OK. Despite Chargers quarterback Justin Herbert connecting with receiver Mike Williams to stake out a 17-7 lead midway through the third quarter, the Chiefs’ offensive and defensive lines finally found their footing, leading a second-half charge with 20 consecutive points in eking out a 27-24 victory.

Facing the menacing edge-rushing tandem of Joey Bosa and Khalil Mack, the Chiefs provided tackles Orlando Brown and Andrew Wylie with reinforcements in the second half, using more chip blocks from tight ends off the line and hidden receivers to slow down the pass rush, allowing the offensive line more time to set and stabilize the pocket for Mahomes.

“I think that possibly helped,” Reid explained, “and then our guys just beared down and I thought did a nice job with it as the game went on, particularly in the second half, it seemed to get a little bit better.”

The changes also produced a game-changing moment in the run game when Clyde Edwards-Helaire broke off a career-best 52-yard run off the right edge, with an additional 15 yards tacked on due to a face mask penalty by safety Derwin James. That 67-yard play flipped the field for the Chiefs, setting up a 31-yard field goal by Matt Ammendola that provided the game’s winning margin.

“Huge,” said center Creed Humphrey on the run. “Clyde’s a stud, we needed that. He delivered.”

The corrections were key, said right tackle Andrew Wylie, who said the offensive line wanted to take on the responsibility of turning the momentum in the second half. He and tight end Travis Kelce helped open the lane for Edwards-Helaire’s back-breaking run.

“Me and Travis had a good little blocking situation going in,” Wylie said. “That felt great when that one hit.”

The refocused offensive line kept Mahomes mostly clean in the second half, yielding only a single first-half sack to a defensive unit that piled up six sacks against Las Vegas in Week 1.

On the defensive side, while Chris Jones got credit for a sack when Herbert slid to the ground late in the second quarter for a 1-yard loss, the Chiefs’ front four didn’t generate much pressure in the first half. Herbert delivered a sharp performance in the first half, completing 12-of-17 passing for 125 yards and a touchdown. Defensive coordinator Steve Spagnuolo focused on tightening up the team’s approach in the second half. The goal was to force Herbert and the Chargers into more passing situations in the second half and stay away from short conversions for first downs.

“We all just came together,” Jones said. “We didn’t point fingers. We knew we were going to face adversity along the way, we built a little character along the way.”

Rookie defensive end George Karlaftis said the defense fed off the crowd’s energy in harassing Herbert in the second half. That especially came into play late in the third quarter when the Chiefs forced a three-and-out culminating in another Jones sack of Herbert and the Los Angeles 2-yard line. That led to a short field that set up a 19-yard field goal by Ammendola.

The defensive line also received plenty of assistance from the linebacker and secondary groups behind them, with rookie cornerback Jaylen Watson delivering a crucial 99-yard interception return that gave the Chiefs their first lead at 24-17 with 10:29 remaining in the game. Willie Gay chipped in 11 total tackles while Nick Bolton posted his second straight game with 10 total tackles.

It’s those critical performances on the defensive side that gives Mahomes the most confidence looking forward after Thursday’s win.

“You just don’t know until you get in these situations,” Mahomes explained. “Sometimes games like that, where the offense played we did today – because we didn’t play our best football – a lot of times we would lose those games. For the defense to keep us around, it’s a big, big step I think in the right direction.”

Jones graded his team’s defensive effort against Arizona in Week 1 as a C-plus, and awarded Thursday night’s performance a B-minus.

“We can still be better,” he said.