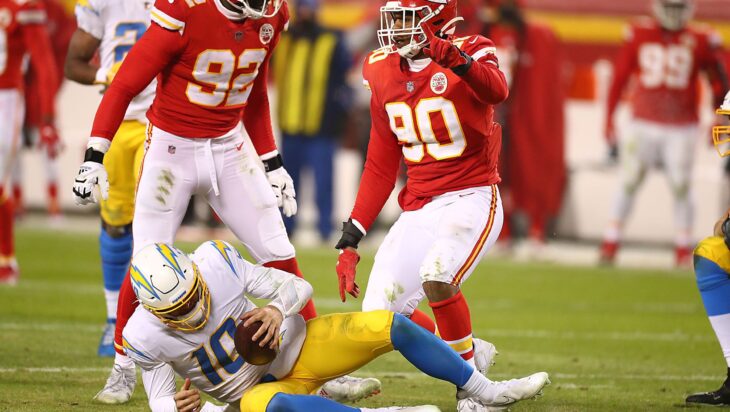 Kanas City’s season finale against the Los Angeles Chargers had the feel of the final game of the preseason rather than the final game of the regular season for head coach Andy Reid, who used the opportunity to rest many of his starters while getting much-needed experience for backups and younger players.

That meant plenty of work for the 36 players who took snaps on Sunday.

“There weren’t a lot of backups that I was going to play,” Reid said following his team’s 38-21 loss to the Chargers. “You really had to push through it and in most cases, it all worked out well. We were able to get a good look at some of the young guys, some of the old guys were able to knock some of the rust off they might have, and all of them had a great attitude with it.”

Players who have seen little or no playing time this season received extensive opportunities Sunday. That includes running back Darwin Thompson, who led the offense with 21 total touches for 110 yards and two scores. Thompson entered the game with just 13 touches for 52 yards on the season, most of that coming before Le’Veon Bell arrived in the KC backfield.

“With the time that I’ve been not playing as much, I’ve been perfecting my craft like catching the ball, working on my pass pro, just things that I need to work on,” Thompson said. “It’s time for me to grow, and then I just need an opportunity, and this was opportunity and I took advantage of it.”

Defensive end Tim Ward arrived in Kansas City as an undrafted free agent in 2019 but spent the season on the reserve list due to an injury suffered during his final year in college at Old Dominion. Ward drew the start at right defensive end in his NFL debut on Sunday, marking the next step in a long journey for the 23-year-old.

“It means so much, it means a lot,” Ward said. “Just having the support of my family, all my coaches and everybody that helped get me this opportunity. It means so much.”

Ward showed strong promise against the Chargers in registering five tackles including his first sack, dropping Justin Herbert for a 7-yard loss on third down that ended the Chargers’ first drive of the second half.

“The call I had outside contain, so I was just trying to get off the ball as fast as I can,” said Ward, who got a huge jump against tight end Donald Parham Jr. “I got overset, so I just came in and waited for him right there.”

Reid said he was happy to see Ward make plays in his first opportunity.

“He’s shown it on the scout team every day, working our guys hard, and we kind of looked forward to seeing what he would do when he wasn’t doing it off a card,” Reid said. “So, he got in and did a heck of a job I thought. I’m curious to see it on tape and see exactly—I didn’t watch him every snap, but he showed up, so I thought that was big.”

A total of 19 Chiefs players took a breather on Sunday, including quarterback Patrick Mahomes and safety Tyrann Mathieu. They were among the seven inactive players listed by the Chiefs before the game. The other five players on the list all did not practice leading up to the game due to injuries: receivers Tyreek Hill (hamstring) and Sammy Watkins (calf), running back Clyde Edwards-Helaire (ankle), right tackle Mike Remmers (back) and linebacker Ben Niemann (hamstring).

Another 12 players were active but did not play against the Chargers. Some dressed for the game in case they were needed while others watched from the sidelines in street clothes. That group included quarterback Matt Moore, tight end Travis Kelce, running back Le’Veon Bell, offensive linemen Eric Fisher, Austin Reiter and Andrew Wylie, defensive linemen Frank Clark and Derrick Nnadi, cornerbacks Charvarius Ward, Bashaud Breeland and L’Jarius Sneed and safety Dan Sorensen.

Reid believes the rest for his starters is more valuable than snaps they may have picked up on Sunday, and he trusts his team to manage their time off well.

“Their minds won’t go far from it,” Reid said, That’s just how this group’s wired, so I’m not too worried about that. Then, stay safe—that’s the other part, with the COVID part of it.”

Key play of the game

The final 2 minutes of the first half proved pivotal in Sunday’s game as the Chiefs went from a tie game to a 10-point deficit in a blink of an eye after a big defensive stand.

Defensive end Khalen Saunders stopped Herbert short of the goal line on fourth down, and the Chiefs took over possession inside their own 1-yard line with 1:54 remaining in the half.

Two plays later, however, quarterback Chad Henne identified Demarcus Robinson in man coverage but the corner bailed move on Robinson while Chargers defensive end Isaac Rochell beat left tackle Martinas Rankin around the outside. Henne hesitated on the throw before the pressure arrived, and Rochell took him to the turf for the sack and safety, putting the Chargers ahead 16-14.

“That’s just a bad decision on me,” said Henne, who finished the game 23-of-32 passing for 218 yards and two scores. “I thought they were going to be in man coverage, they pressed and then they bailed. Kind of gave a double move to Demarcus out there. At the same, once I knew they bailed, kind of just either dirt the ball or get the ball out. It was just one of those turning points in the game where you wish you had back.”

Following the free-kick from Tommy Townsend, the Chargers drove 59 yards in five plays, with Herbert sneaking in from 1-yard out for a touchdown. Herbert then connected with running back Justin Jackson for a two-point conversion, and the Chargers went from a tie game to a 24-14 lead in 87 seconds and never looked back.

Another Chiefs miscued also led to Los Angeles’ second touchdown. After the Chiefs defense held the Chargers to a punt on their second drive, Mecole Hardman muffed the punt from Ty Long, providing Herbert a short field for a 17-yard touchdown drive that tied the game at 14.

“We came up short, we kind of had it going there for a little bit early,” Reid said. “After the punt, the muffed, we had a problem thereafter that, short field and they did a nice job.”

Linebacker Willie Gay exited the game early with a sprained ankle and did not return, while cornerback Rashad Fenton left in the game with two sore ankles, Reid said.

The scariest injury came early in the third quarter when cornerback Deandre Baker sustained a broken left femur, as reported by Reid after the game. Baker’s left leg was stabilized on the field before paramedics escorted him from the stadium. Baker raised his hand to crowd to an ovation before being loaded on to the ambulance.

“My heart goes out to the kid, he had been busting his tail, really done a nice job for us,” Reid said.” He will be able to come back from this, so that’s a positive as we go forward.”

The Chiefs elevated Baker from the practice squad for Sunday’s game. He played in two games for the Chiefs since joining the club Nov. 19, and was busy against the Chargers with five combined tackles, an 11-yard sack against Justin Herbert and a broken up pass. Reid said he’s proud of Baker for how he handled himself since joining the team.

“He’s been through a tough road here and comes in and really has done a nice job with just concentrating on playing, and he went out and he was playing good football,” Reid said. “Kind of a freak thing that happened. I know he will rebound from it, but for right now, our hearts go out to him.”

The Chiefs (14-2) will spend next weekend awaiting the outcome of the first-ever Wild Card triple headers to learn who will they face in the AFC Divisional Round. Reid plans for the team to get conditioning, film work and a couple of light workouts in before preparation for playoff week begins in earnest next weekend. The Chiefs have the only bye week in the AFC playoffs and will host the lowest remaining seed at Arrowhead Stadium on either Jan. 16 or 17.