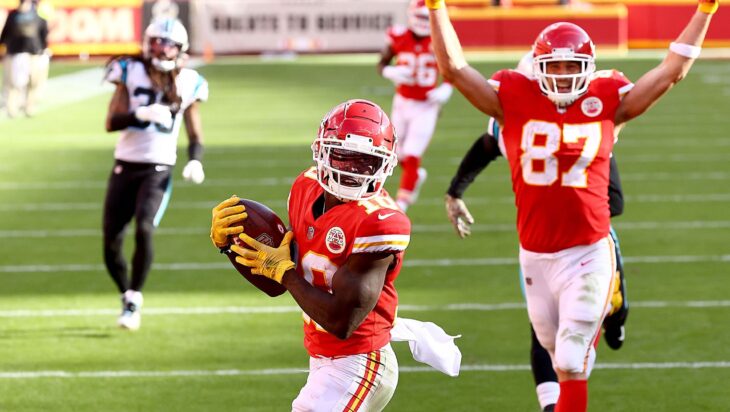 The Chiefs offense struggled to find its rhythm through two opening drives on Sunday but a steady diet of Travis Kelce and Tyreek Hill connecting with Patrick Mahomes eventually fueled Kansas City to a 33-31 win over the Carolina Panthers.

“They’re two special players,” Mahomes said after the win. “They both really understand the offense, they know how to get themselves open and they’re hard for guys to cover one-on-one. Whenever they’re working like that, we’re a hard offense to stop and you see guys that when they get their number called too, they make plays as well.”

Kelce and Hill each topped the 100-yard receiving mark, combining for 19 catches and 272 receiving yards as Mahomes finished the game 30-of-45 passing for 372 yards and four scores.

The Chiefs trailed 17-16 midway through the third quarter and needed a spark facing third-and-7 from their own 44-yard line. Kelce ran an out and up route down the right side, picking up 44 yards and setting up a 4-yard touchdown pass to Clyde Edwards-Helaire that put the Chiefs up for good.

It’s a route Mahomes and Kelce run frequently, and earlier in the game the Chiefs noticed the Panthers secondary trying to make a play on the ball.

“When we had the right opportunity, we called that play and it was a great call and he ran a great route and I just tried to get the ball to him,” Mahomes said, “kind of got the drive going again and we were able to go down and put points on the board.”

“He had one of those days,” Reid said. “Just anytime a big play needed, both he and Tyreek made them. So proud of those two, how mature they are and how they’ve handled everything and grown as men most of all. But Trav had an All-Pro day, which he is.”

Mahomes and Hill connected six times for 57 yards in the first half, yet their usual chemistry seemed out of synch with another six attempts falling to the turf. Hill put the blame on himself for the missed connections.

“It’s just me doing too much of my route,” Hill said. “On the very deep route on the left side, he threw to the corner I believe. I did too much to the safety and (Mahomes) was ticking too much, so it was kind of hard for him to judge my angle. I’m going to take all the blame for that. We’ll be better next week after the bye week.”

The duo found their rhythm in the second half, however, connecting four times for 56 yards and two scores.

“Pat is going to be Pat no matter what, and I’m going to be me,” Hill said. “I know if Pat overshoots me one play or I drop a pass, we’re still going to trust each other and come back and make the next play because that’s just how we get out.”

Why Chiefs favored pass vs. Panthers

For the second week in a row, the Chiefs showcased another pass-heavy game plan with 46 pass plays while utilizing Clyde Edwards-Helaire and LeVeon Bell rushing out of the backfield for a combined nine carries resulting in 22 yards. Hill also had a carry for the Chiefs.

The Chiefs ran 47 pass plays against the Jets last week while utilizing their running backs for 21 carries for 50 yards. But while Reid attributed that disparity to run-pass option plays resulting in an abundance of throws, this week’s game plan called for putting the ball in their air.

“We felt like the pass game, we could execute that maybe even better than the run game,” Reid said “We’re going to try to do what works that particular week and then roll with it.”

Mahomes targeted Kelce and Hill with a combined 30 passes, a number that surprised even the quarterback.

No worries for Chiefs pass rush

Frank Clark and Chris Jones each picked up a sack on Sunday against the Panthers, but the Chiefs remain in the bottom half of the league in terms of sacks per game and sack percentage. The club has picked up 19 sacks on the season, well off the pace last year that saw the team tally 45 sacks.

Clark picked up his fourth sack of the season on Sunday, but he sees many reasons for the team’s struggle to take opposing quarterbacks to the turf.

“I’m doing a lot more dropping in coverage, a lot more checks that stop us from going after opposing teams,” Clark said. “You might be in a defensive call that you get excited that you’re pass rushing but the offense might show you something else, they might show you a screen.”

Corresponding to his usage this season, Pro Football Focus has given Clark the lowest grades of his career in pass rushing and run defense while awarding him personal-bests for pass coverage and tackling. He says he maintains faith in the scheme of defensive coordinator Steve Spagnuolo.

“We’ve got a great defensive coordinator, he’s on top of things like that,” Clark said. “Usually when he calls a play, it’s putting you as a player in the right position to be successful. You can’t be mad at that.”

Clark adds that he’s not concerned about the team’s lack of production in rushing the passer.

“I don’t trip about stuff like that and I know my teammates aren’t really tripping, especially Chris,” Clark said. “I put a lot on us because it’s our defensive line and reality is it’s our defense.”

Kicker Harrison Butker failed to connect on another extra-point try on Sunday, giving him five misses on the season. That drops his success rate to a stunningly low 82 percent in a league where kickers average 94 percent on PATs.

After Mahomes connected with Hill on a 28-yard touchdown pass early in the fourth quarter, Butker pushed the extra point try into the left upright, with the ball bouncing off the crossbar before falling to the ground in the end zone. Mahomes approached his kicker on the sideline and gave Butker an embrace and a word of encouragement.

“All I said was he’s one of the best kickers, if not the best kicker in this league, just go out there and kick the ball,” Mahomes said. “Don’t take it as serious, we got your back regardless, you’re just as important as every other person on this team, and maybe more important.”

Butker and Carolina’s Joey Slye combined for three missed field goals in windy conditions at Arrowhead Sunday. Butker missed wide left from 48 yards but also connected from 39 and 55 yards. He’s now tied with Jan Stenerud for second place in franchise history with 12 field goals of 50 or more yards in his career, and his three kicks from more than 50 yards leave him one shy of the club record for most kicks from that distance in a season.

Mahomes reiterated the point coaches and players alike have made in recent weeks supporting Butker.

“For him we have all the ultimate trust in him to go out there every time he hits the field,” Mahomes said.

The Chiefs have free time coming their way during Week 10 with the bye. The club normally returns from the bye on Sunday for a light practice before resuming their normal game-week preparation on Nov. 16. The Chiefs next play on Nov. 22, marking their trip to Allegiant Stadium in Las Vegas to face the Raiders. Game time is set for 7:20 p.m. central on NBC Sunday Night Football.