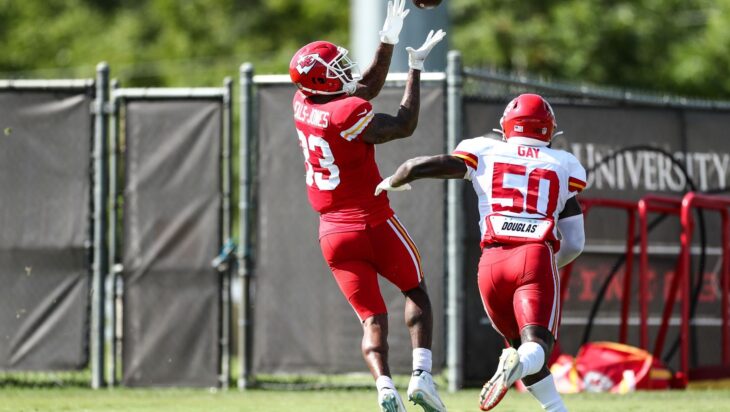 KANSAS CITY, Mo. — The Chiefs suffered another injury on Monday with tight end Ricky Seals-Jones leaving the practice field on a training cart after suffering a leg injury.

The club didn’t immediately disclose the severity of the injury, but it comes at a position where the Chiefs have depth concerns as training camp continues. Deon Yelder hasn’t practiced the past four days due to a groin injury.

That leaves Travis Kelce and Nick Keizer as the only healthy tight ends that started training camp with the club. The team claimed tight end Daniel Helm on waivers Sunday from San Francisco to augment their depth there.

The Chiefs did get defensive tackle Derrick Nnadi on Monday. The club had been working Nandi into practice slowly after he underwent ankle surgery in the offseason.

Tanoh Kpassagnon playing to “impress everybody”

Defensive tackle Tanoh Kpassagnon is entering a contract season in 2020, but the 2017 second-round draft pick says he doesn’t feel any added sense of urgency with free agency on the horizon.

“I’ve always been playing to impress everybody,” Kpassagnon. “I play for myself, I play for mom, I play for everybody back home. I work hard every day and I let the other stuff work itself out.”

Kpassagnon delivered a breakout season in 2019, collecting four sacks and 29 total tackles in the regular season with eight starts. He picked up two sacks in the AFC Championship win over Tennessee and tallied two tackles in Super Bowl LIV.

That experience drives him into the 2020 season.

“I’m always looking to grow, and especially making those key sacks or those keys plays,” Kpassagnon said. “Then being able to play in a Super Bowl, being able to win a Super Bowl boosts my confidence, boosts our whole team confidence knowing we know what we are and we know exactly what we need to do to do it again.”

Defense going “back to ground zero”

The Chiefs defense finished the 2019 season with a flourish in allowing just 11.5 points per contest in its last six regular-season games. But defensive coordinator Steve Spagnuolo isn’t about to let his group rest on its laurels.

“Just because you finished at a certain point at the end of one year does not mean you pick right up from that particular spot,” Spagnuolo said. “We got to go back to ground zero.”

While Spagnuolo sees much of his starting lineup return, he’s looking to replace Kendall Fuller, who departed during free agency. He also doesn’t have Thornhill on the field right now, and he expects to start the season with cornerback Bashaud Breeland and defensive tackle serving suspensions.

“There are some spots, some pieces that we got to find to put this thing altogether,” Spagnuolo said “We’re light years away.”

While the Chiefs seem poise to avoid the slow start the defense saw last year, Spagnuolo knows from experience it can lineups time to gel and find their rhythm.

“There’s nothing in our brains that says we’re not going to go through some growing pains just like we did last year,” he said. “That happens every year.”

The Chiefs have the day off on Tuesday before resuming training camp practices on Wednesday. The team has tryout scheduled for free agents on Tuesday.

Practices are closed to the public and fans will not be allowed in the Truman Sports Complex during practices.