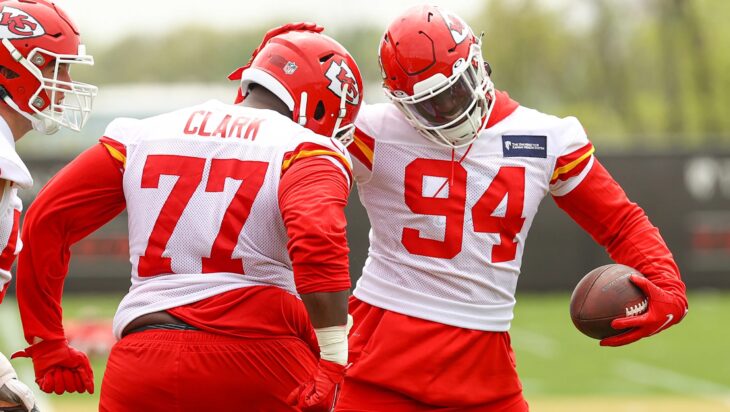 KANSAS CITY, Mo. — With the conclusion of the rookie minicamp on Monday, the introduction to the NFL is complete for the Chiefs’ incoming rookie class. Next up for head coach Andy Reid is ushering his young crop of talent into full-speed offseason workouts.

“I think it’s a good foundation for the young guys that are coming back,” Reid said after Monday’s practice. “Not everybody’s making the team, obviously, that was out here. The ones that are coming back in less than a week, they will be able to hit the ground running, know the snap count. You’re down to the basics, right. So snap count, how to get in huddle, what the coverages are, fronts.”

Rookie minicamp, more than anything, is a teaching camp and a passing camp. Players in the trenches can best showcase their skillset against blocking sleds and bags. For the 39 players in camp on a tryout basis, what happens on the practice fields are only part of the evaluation.

“They’re in meetings half the day, so you get an idea of what their retention is, how do they take it from the classroom onto the field,” Reid explained. “It’s all passes, right? We’re not running the football out there, so you get to see some of their mechanics there and what they can do at all positions. That’s really it. Hard to tell about tackling, which is pretty important. Hard to tell about blocking, run game, how does the defensive line transition from the pass to the run? You can’t see that. How does an offensive linemen run block? You can’t see that right now, so you just take it off the bags for those things.”

No players appeared to sustain significant injuries during the camp, and the only injury noted by Reid belong to rookie wide receiver Skyy Moore, who was limited with a hamstring issue. He took part in individual drills but didn’t participate in any team activities. Moore himself called it a minor issue on Sunday, and Reid concurred.

(He) tweaked his hamstring before he got here and will be ready to go when he gets back, that’s where we’re at,” Reid said.

Rookie minicamp is almost always an uphill climb for the offense with quarterbacks and pass catchers working together for the first time. Kansas City’s first summer-like day provided another challenge on Monday, with the temperature topping out at 90 degrees by the end of practice that started at 11:15 a.m. Winds at 20 miles per hour gusted up to 40 miles per hour at times.

During a special teams period early in practice, kicker Parker White started a field goal attempt on line with the left goalpost, only for the wind to take it so far right it nearly landed outside the corner pylon in the end zone. The wind also made it difficult for quarterbacks throughout the weekend, especially on deep throws and touch passes.

The offense finally caught a break starting with the first play of 7-on-7 work Monday. Anthony Gordon threw a pass into tight coverage in the red zone that was tipped three times before falling softly into the hands of receiver Ryan McDaniel in the end zone.

One of the best plays of the day came via the connection of Kent State quarterback Dustin Crum and Missouri wide receiver D’ionte Smith, a Raytown, Missouri High School product who also spent time at Coffeyville Community College and MidAmerica Nazarene. Smith made a quick pivot on a fake inside before cutting out to the left side, freeing up for a quick hit into the end zone for a score. Smith was a busy target throughout the weekend and was particularly impressive on yards after the catch.

The Chiefs for the most part in this camp stuck with what players did well in college. For example, fifth-round choice Darian Kinnard manned right tackle while seventh-round pick Nazeeh Johnson moved between free safety and nickel. Third-round pick Leo Chenal worked almost exclusively at MIKE linebacker, a position where he expects to backup Nick Bolton even if he spends most of his time at the SAM linebacker. First-round cornerback Trent McDuffie moved from inside to outside, just as he did at Washington.

Reid noted that it’s during OTAs when those roles might change.

“If it’s a kid that’s coming back, he might have been a safety but maybe you move him to corner,” Reid said. “Something like that. But you get an idea of how they can move around, how well they can pick stuff up. You’re literally starting at the ground level with these guys, so all the fundamentals, schemes, your basic stuff.”

Undrafted players that popped during rookie minicamp: RB Jerrion Ealy (Mississippi) has the making of a mismatch out of the backfield, compares favorably with Jerrick McKinnon. … RB Tayon Fleet-Davis (Maryland) wore no. 31 during minicamp and looked a lot like another recent No. 31, Darrel Williams, especially catching the ball out of the backfield. … Many receivers looked good in camp, but it seemed that Smith, Andrew Boston (Incarnate Wood) and Mathew Sexton (Eastern Michigan) had very good camps. Strong out as well from Breon Michel, a former teammate of Tershawn Wharton at Missouri S&T. … All three tight ends had good camps, including Chiefs practice squad alums Mark Vital and Matt Bushman. Rookie Mitchell Brinkman (South Florida) also impressed. … This camp had a lot of talent on the defensive side of the football even outside the draft picks. Linebackers Jack Cochrane, Mike Rose and Jordan Genmark Heath showed potential. … In the secondary, former Missouri Western and Lee’s Summit, Missouri native Brandin Dandrige made his mark.

Players in the trenches that deserve recognition: This isn’t a camp for lineman on either side of the ball with no live contact, but players worth watching down the road include interior offensive lineman Michael Caliendo (Western Michigan), guard Christopher Glaser (Virginia), offensive tackle Greg Long (Purdue) and guard Gene Pryor (Hawaii). Caliendo and Pryor were signed as undrafted free agents while Glaser and Long were tryout players. On the defensive side of the ball, defensive tackle Joe Wallace (Sam Houston State). Don’t rule out Christian Clark (Alabama State), the younger brother of Frank Clark, getting further looks as well.

Most Valuable Player of Minicamp: Hard not to go with first-round edge rusher George Karlaftis. His motor was noticed by everyone, especially his head coach. Fans should wait until the pads come on before anointing Karlaftis as the second coming of Tamba Hali, but there was a lot to like in his first three days in a Chiefs uniform. Honorable mention should go to first-year edge rusher Malik Herring, who also looked like he belong in his first live-action on the team’s practice field after spending last season on the non-football injury list.

Justyn Ross “Feeling Himself Out”

Clemson wide receiver Justyn Ross arrived to rookie training camp with sky-high expectations, especially for an undrafted free agent. Ross had a quiet weekend on the field — finding the right orthotics was an issue on Saturday — but it’s also part of the plan according to Reid.

“He was knocking the rust off here, but you can see the skill there,” Reid said.

Ross exploded on the scene during his freshman and sophomore seasons for the hauling in 112 passes for 1,865 yards and 17 touchdowns. He missed the 2020 season due to a congenital fusion of his neck and spine that required surgery. He also underwent surgery for a stress fracture in his foot in November.

Reid doesn’t think it will take long for Ross to settle in, however, observing that Ross showed this weekend he’s a “big kid that’s smooth and runs well.”

“He’s kind of feeling himself out here just a little bit having been hurt before, the last couple of years,” Reid said. “Sure has a lot of talent there, kind of look forward to getting him. Smart kid. Smart enough to pick everything up.”

Reid provided a brief update Monday on tight end Jody Fortson, who underwent surgery for a torn Achilles tendon on Oct. 20. There’s a chance Fortson could get on the field at some point during Phase III of offseason workouts, which conclude with a mandatory minicamp June 14-16.

“If not, training camp,” Reid said. “He’s done very well with his rehab. He’s another one of those that goes 100 miles an hour and wants to get going, but you got to be smart with that, too.”

A series of moves the club announced last week hit the NFL transaction wire officially on Monday. That included the signing of seven more of the team’s draft picks.

The club initially listed Citadel wide receiver Raleigh Webb as one of the tryout players attending their rookie minicamp. Webb did not participate after signing as an undrafted free agent with Baltimore before the camp started.

Monday also marked the beginning of the second week of Phase II of the NFL offseason program, a period that allows for individual and position drills with coaches as well as individual offense versus defense players at a walk-through pace. No live contact or full-team drills are permitted.

The rookies return to the facility on Sunday, May 15 for the final week of Phase II. The third phase, which includes 10 organized team practice activities and a three-day mandatory minicamp, starts on May 23. That phase allows 7-on-7, 9-on-7, and 11-on-11 drills but no live contact. The Chiefs usually open one of the offseason practices to select season ticket members but otherwise the practices are closed to the public.