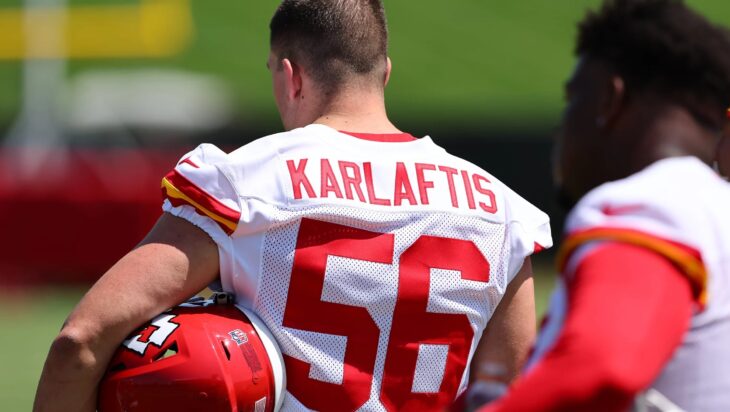 KANSAS CITY, Mo. — After two seasons without a full-fledged minicamp greeting the newest arrivals to the NFL, Saturday’s opening reception for the 2022 class of rookies couldn’t have been a more picture-perfect day of football at the Chiefs training complex.

A group of 74 players including the club’s 10 draft picks and 10 undrafted free agents took to the field under sunny skies with temperatures in the low 70s. The football wasn’t perfect but it was hard to miss the effort

For rookies such as second-round safety Bryan Cook, learning as much as possible is the mission this weekend.

“Being a sponge as much as possible, that means soaking up all the information from the coaches and teammates, things like that,” Cook said. “So if I can be the best sponge I can be, that’s successful in my eyes.”

Edge rusher George Karlaftis, the team’s first-round pick at No. 30, said being an NFL player requires an adjustment.

“The practice, whether it’s from the playbook or the intensity of the practice and everything in between, it’s just that next level, right,” Karlaftis said. “Just like going from high school to college, it’s just a whole new ballpark, a whole new level. It’s hectic at first but you adjust eventually.”

Cook, who underwent shoulder surgery during the offseason, was also limited to individual drills on Saturday. During team periods, Cook constantly stood near the goal line behind the defense taking mental reps, occasionally joined by an assistant coach.

“I’m on the field until they tell me not to be,” Cook said. “I’m doing what they let me do. Other than that, the things I can do I’m going to try to make the most of it. That’s all I can do.”

Running back Isiah Pacheco, a seventh-round draft pick last weekend, participated in individual drills but was on the sideline during team periods. Tight end Kehinde Oginni Hassan did not participate in practice but was not listed in the injury report. Hassan, a native of Nigeria, signed with the Chiefs as a free agent from the NFL’s International Player Pathway program.

The football isn’t always pretty during rookie minicamp. Coaches are much more patient with stopping the action to make sure everyone understands a play for assignment. It’s the first “real” practice of a new season, and everyone has kinks to work out. For the majority of practice, for example, a light in the play clock was out, turning “18” seconds into “10” seconds and turning the number nine into seeming hieroglyphics.

On the field, several players stood out on day one. Tryout wide receiver Andrew Boston turned in two highlight-reel catches, one during individual drills. Racing down the right sideline, Boston turned and reached across his body with his right hand to snag the ball, Odell Beckham Jr. style.

The undrafted free agent with the most attention on him was Justyn Ross, the talented wide receiver from Clemson who missed the 2020 season due to a congenital fusion of his neck and spine that required surgery. He also underwent surgery for a stress fracture in his foot in November. He made one catch on two targets and looked smooth and comfortable on the field despite the lack of action coming his way. The one incompletion in his direction was on a throw much too high to catch, and cornerback Jaylon Monroe undercut Ross when he leaped for the catch. The collision showed Ross was able to walk away from the play unscathed, a good omen for both him and the Chiefs that his injuries may be well behind him.

Offensive play of the day: It wasn’t a great day for the offense but Crum had a couple of opportunities to showcase his arm strength. The best moment came when he zipped a bullet through a tight window over the middle to wide receiver Breon Michel, who took the pass in stride for a big gain.

Defensive play of the day: Gordon attempted to hit Boston with a back-shoulder throw down the right sideline, but he left it too low and inside. Defensive back Brandin Dandrige read the route and throw correctly, jumping in front of the ball and racing toward the end zone. Linebackers Jack Cochrane and Jordan Genmark Heath also came up with interceptions on the day.

Best play that didn’t count: Honorable mention should go to Michel, who made a seemingly impossible contested catch after shaking off a devastating hit from safety Reggie Stubblefield. Stubblefield took the brunt of the hit and Michel held on to the ball but couldn’t get two feet down in bounds.

Most valuable player: Yes, it’s early, and there’s no live contact, but defensive end George Karlaftis looked every bit the part of first-round draft pick on day one. The best matchups of the day in the trenches came with Karlaftis facing off against fifth-round offensive tackle Darian Kinnard, and Karlaftis won the majority of the battles. His speed and handwork both looked sharp, and he didn’t seem overwhelmed by the experience. On a day when most of the team’s draft picks stood out, Karlaftis was dominant throughout.

“Rookie” minicamp is a bit of a misnomer in that “first-year” players who haven’t accrue a full season of service time are also eligible to attend. The Chiefs have 14 first-year players invited to this year’s camp, including quarterback Anthony Gordon, wide receiver Cornell Powell, tight ends Matt Bushman and Mark Vital, center Darryl Williams, defends ends Austin Edwards and Malik Herring and defensive backs Zayne Anderson, Dicaprio Bootle and Devon Key. Gordon, Powell, Vita and Bushman were the only players spotted in attendance during practice Saturday,. Powell only took part in individual drills.

The largest group of players in the rookie minicamp are players invited on a tryout basis. While tryout players face long odds in battling past rookie free agents, draft picks and current members of the 90-player roster, it’s not an insurmountable task. Tight end Jody Fortson was one of 40 tryout players in 2019, and he’s still with the club. Last year wide receiver Daurice Fountain was one of five tryout players in a condensed rookie camp and landed a free-agent deal with the Chiefs.

A total of 40 tryout players are taking part in this weekend’s minicamp. Among intriguing names to watch:

WR Andrew Boston, Eastern Michigan: At 6-foot-3, 200 pounds, Boston offers plenty of size and was a four-year starter for the Eagles, racking up 188 catches for 2,621 yards and 20 touchdowns.

WR D’ionte Smith, Missouri: A local product going from Raytown High School to stints at Coffeyville Community College and MidAmerica Nazarene, Smith was a junior college All-American in the high jump. “Boo” then walked on at Mizzou, playing all 13 games for the Tigers last season with eight catches for 195 yards and a touchdown. Measured in at 5-10, 151 pounds at his pro day, and his best chance at the NFL is as a return specialist.

WR Breon Michel, Missouri S&T: Former Miners teammate Tershawn Wharton is already on the Chiefs roster, so why not Michel? Racked up big numbers last season with 63 catches for 1,092 yards and 14 touchdowns. Took part in Missouri’s pro day posting a 4.57 40-yard time and a vertical jump of 38 inches, which would have ranked in the top 10 among receivers at the NFL Combine.

OT Greg Long, Purdue: The 6-foot-4, 300-pound Long started as a true freshman at UTEP and was a graduate transfer to Purdue, earning Big 10 honorable mention each of the last two seasons. He makes this list, however, after going full Eric Fisher when a fan threw a bottle of beer on the field during the Boilermakers’ upset over No. 2 Iowa last season.

OG Hunter Spartz, Montana Tech: Spartz cranked out 28 reps on the bench press at the Orediggers’ pro day, which would have ranked fifth among offensive linemen at the NFL Combine this season. He’s scheduled to attend rookie minicamp with the Patriots next weekend if he doesn’t sign with the Chiefs.

DT Joe Wallace, Sam Houston State: The 6-foot-1, 300-pound Wallace earned second-team All-American status at the FCS level last season. Helped the Bearkat defense rank No. in rushing defense during the 2019 season with 21 tackles including 11 for a loss with four sacks.

LB Jordan Genmark Heath, UCLA: Similar to Karlaftis, Genmark Heath was born and raised in Sweeden before his family moved to the United States when he was 14. He’s late comer to football yet committed to Notre Dame and played 39 games for the Irish. He made a graduate transfer move to UCLA for the 2021 season and started 12 games at inside linebacker and ranked second on the team with 55 tackles and 3.5 sacks.

S Reggie Stubblefield, Kansas State: Played 32 games at Praire View A&M over five seasons before transferring to the Wildcats last season. Earned honorable mention All-Big 12 with 34 tackles including seven for a loss and a sack. Stubblefield also played linebacker for the Wildcats, showcasing his versatility and an ability to play in the box.

K Parker White, South Carolina: No, there’s no position battle looming in Kansas City for Harrison Butker but White can kick in the NFL. He was 16-of-17 on field goals last season with a long of 54 and perfect on extra points while 68% of his kickoffs went for touchbacks.

For players who don’t land a job with the Chiefs, they gain valuable experience along with tape they can use for landing future opportunities. Some will likely double-dip and attend a second rookie minicamp next weekend when 24 teams hold their camps. For some, this might be their one and only shot at the NFL, and a memory for a lifetime.

The rookies will have another walk-through practice Sunday morning followed by an afternoon workout. The minicamp closes Monday with a late morning practice, hopefully before temperatures reach into the low 90s in Kansas City. The rookie minicamp practices are closed to the public.

The Chiefs are now in the second phase of the NFL’s offseason program, which allows for individual and group drills as well as individual offense versus defense players at a walk-through pace. No live contact or full-team drills are permitted.

The third phase, which includes 10 organized team practice activities and a three-day mandatory minicamp, starts on May 25. That phase allows 7-on-7, 9-on-7, and 11-on-11 drills but no live contact.