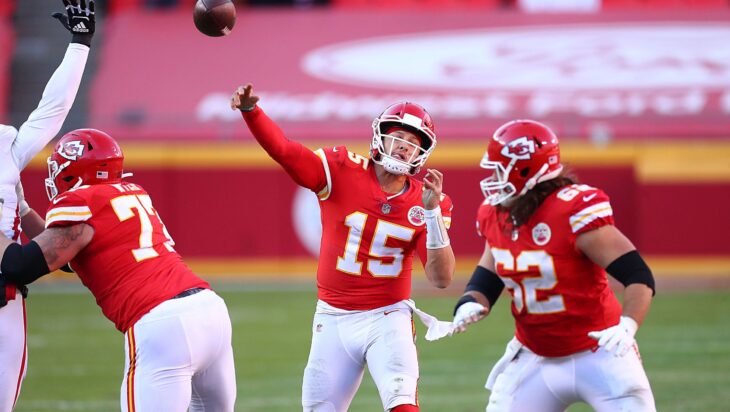 Patrick Mahomes is in the midst of an MVP-caliber season but the Chiefs quarterback wasted no time after Sunday’s 17-14 win over the Atlanta Falcons of pinning the blame for his team’s less-than-spectacular offensive performance squarely on his shoulders.

“There were a lot of reads, a lot of protection calls, a lot of adjustments at the line of scrimmage that I made wrong or that I didn’t make the right way that put us in bad positions,” Mahomes said opening his postgame press conference.

The normally sterling Mahomes finished the game 24-of-44 passing for 278 yards and two touchdowns along with an interception. The Falcons turned to the defensive scheme that gives the Chiefs offense its most consternation – dropping seven back in coverage while bringing four pass rushers. Mahomes gave Atlanta credit for executing well but still found himself at fault for off-target throws, busted protections and missed opportunities.

The Chiefs entered the game averaging a league-best 427.9 yards per game and rank No. 2 with 31.1 points per contest. But the club entered the fourth quarter in a 7-7 ball game due to two red-zone turnovers and inability to sustain scoring drives, resulting from plays head coach Andy Reid admits he would like to have back.

“We’ve got to just kind of get ourselves back into rhythm here,” Reid said. “I think we just weren’t as sharp as we need to be, and I’ve got to go back and look at the plays, make sure we’re dialing up the right things and then executing them, or at least dialing them up in the right order and then go from there.”

While certainly an out-of-character performance for Mahomes, the quarterback still got the job done when his team needed him the most. Mahomes led a nine-play, 75-yard drive for the game-winning score, culminating with a 25-yard touchdown strike to Demarcus Robinson. Mahomes was 4-of-7 for 79 yards on the march down the field in 2 minutes, 38 seconds.

Reid definitely liked what he saw from his quarterback on the final game-winning drive.

“One positive was they battled like crazy, and then here’s Pat just ripping the heart out with that last throw to D-Rob,” Reid said. “I mean, he could’ve hung his head and he’s going, ‘Give me more. Like a good pitcher, I’m going to keep firing.’ So, he did that and he worked through everything that was going on before, any frustration or whatever was going on before, he worked through it, and here came out on the right end.”

The Chiefs normally expect to roll into a game with Anthony Hitchens, Damien Wilson and Ben Niemann patrolling the middle of the field, but in crunch time against the Falcons it was Willie Gay, Darius Harris and Omari Cobb carrying the water for the Kansas City defense.

“The young linebackers finished the game, were flying around and making plays,” Reid said of the trip who stepped in to carry the Chiefs in the second half.

The team started the day without Hitchens, who is on the COVID-19 reserve list, and Wilson, who continues recovering from a knee injury. When Ben Niemann exited late in the first half with a hamstring strain, it was up to Gay to step into a leadership role.

“I was telling those guys when Ben went down, it’s like rookie minicamp all over again,” Gay said. It was just us three out there doing drills, running over plays. I told them we win this game, I told them this in the second quarter, if we win this game it will be something special not having none of the starting linebackers, but just have us.”

Gay led the Chiefs with nine total tackles including one for a loss. He also forced a fumble that ended an Atlanta drive at the Kansas City 18-yard line. Harris recovered the loose ball for a 15-yard gain. Gay rolled away after knocking the ball loose from receiver Brandon Powell and didn’t immediately know he caused a fumble.

“I looked back and I saw Darius Harris scoop it up, and I was like, ‘Oh, this is a pretty big play,” Gay said. “I was hoping he was going to score, but I was joking with him that he’s not the fastest guy in the room, so it’s all good.”

Harris took over the “green dot” helmet from Niemann, which made him responsible for receiving the play call from the sidelines and making sure his teammates lineup in the proper formation, a heady responsibility for a first-year player who hadn’t taken a defensive snap in his career heading into Sunday.

“We did our job,” Gay said. “And Darius Harris did a great job at the end and in the fourth quarter just calling plays and doing his job. It was big.”

One of the biggest defensive plays of the day for the Chiefs came from an offensive player. Falcons linebacker Foyesade Oluokun jumped out of his zone to intercept a Mahomes pass at the 1-yard line and returned it across midfield with his sights on the end zone when seemingly out of nowhere receiver Tyreek Hill raced from behind to punch the ball loose.

“He made a great a great effort to get the ball,” Reid said of Hill’s defensive effort. “We had some linemen that were chasing also, and we’ve got to work on our tackling down there a little lower, but we did a nice job getting after it there. But yes, Tyreek’s done that before, he did it again, and I told him, ‘Good job.’”

Oluokun had a wall of blockers that Hill evaded before punching the ball loose. The ball went out of bounds at the Chiefs 27-yard line, which brought possession for the Falcons back at the 48 where Oluokun lost possession. The Chiefs defensive took over from there, with Frank Clark and Chris Jones combining for back-to-back sacks and holding the Falcons to a three-and-out.

Mahomes said Hill’s effort was another example of the team’s “championship swagger.”

“The fact him battling through injury already, to be out there during that game and then to make that play,” Mahomes said. “I whiffed on a tackle during that drive, during that little pick. For him to follow the ball and play, you have to have those type of guys on your team if you want to win football games.”

Travis Kelce reached a slew of milestones on Sunday, most notably eclipsing the record for most receiving yards in a season by a tight end. Kelce finished the day with 1,416 yards on the season, besting the previous record of 1,377 yards by George Kittle in 2018. Kelce briefly held the record with 1,336 receiving yards in 2018 before Kittle claimed the record less than a half-hour later.

Kelce also picked up seven catches on the day, giving him 105 on the season. He’s the first tight end in league history to post more than one season with at least 100 receptions. He posted 103 catches in 2018. He also eclipsed his own franchise record for most pass receptions in a season.

The Chiefs picked up win No. 14 on Sunday, marking the first time the Chiefs have won 14 games during the regular season. They have secured a playoff bye for the third-straight season and secured the No. 1 seed in the playoffs for the second time in the last three years. They have also won 10-straight regular-season games, tying the franchise records for consecutive wins in a single season. The Chiefs also won 10-straight games in the 2015 campaign.

The Chiefs are now 91-36 in the regular season since Andy Reid’s arrival in Kansas City in 2013. The New England Patriots are the only team with a better record at 92-34 pending their Monday night game against Buffalo.

Harrison Butker connected on a 53-yard field in the fourth quarter, his fourth field goal of the season from 50 or more yards. It’s the second time in his career he’s pulled off the feat, which he also accomplished in 2017. Nick Lowery (1980) and Cairo Santos (2015) also matched that number. Butker now was 13 field goals from that distance, trailing only Nick Lowery (20) in the club’s record books.

Quote of the day

Obviously, we didn’t end up in the situation that we wanted. They had brought a lot of man-type pressure in that situation, so we were going to try to sneak me out the backside and be wide open for a walk-in touchdown. Obviously they had a guy out there — I mean, they had to have the biggest, fastest guy possible with No. 22, (safety Keanu) Neal. I knew I wasn’t in a good situation at that point. I told Sammy before the play, ‘It’s fourth down, you’ve got to throw it even if I’m covered.’ He had the leverage on me, and I’m probably going to be on You Got Mossed on Monday, so I’m looking forward to that.

— Patrick Mahomes, the intended target on the trick play resulting in an interception thrown by Sammy Watkins

The Chiefs next Sunday will entertain the Los Angeles Chargers (6-9) in the regular-season finale at Arrowhead Stadium. The Chargers are on a three-game winning streak and fresh off a 19-16 win over the Denver Broncos League facilities are shut down on Monday and Tuesday for COVID-19 protocols, and the Chiefs will return to the practice field on Wednesday for their final tuneup of the regular season. Kickoff is set for Sunday, Jan. 3 at 3:25 p.m. central time on FOX (WDAF-4 in Kansas City).