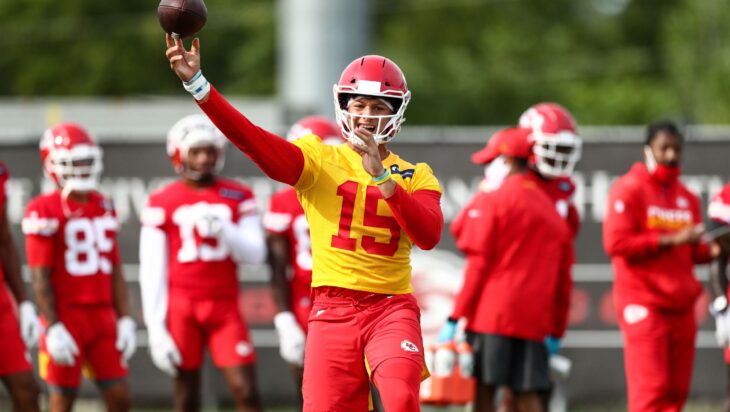 KANSAS CITY, Mo. — It’s been more than six months since the Chiefs last took to the field with helmets and pads on, and that made Friday a good day for head coach Andy Reid.

“Good to get the guys back into pads and going,” Reid said following Friday morning’s first padded practice of training camp. “It’s been a bit of time, but we had a great ramp-up period with them. These guys have worked extremely hard. They came out today and worked extremely hard with the pads on and there was some heat out there. I’m proud of them for that, their attitude obviously is important and they’ve got a good one right now.”

The Chiefs veterans reported for camp on July 25 and started their acclimation period on July 31. They were able to pick up the pace and activity starting Sunday, but Friday marked the first padded practice of the NFL season for any team.

Despite the late start to the season, safety Tyrann Mathieu said a lot of the defensive playbooks is already installed. The Chiefs are Mathieu’s third organization, and he doesn’t think any coach works as hard as Reid.

The start of padded practice is crucial for defense, Mathieu said. Without an offseason program, he believes defenses will struggle to catch up with offenses early in the season.

Defensive end Frank Clark did not practice due to what Reid termed a stomach virus. The coach emphasized that Clark did not have COVID-19. The defensive end missed practice time last season and received treatment for a stomach ailment Clark stemmed from a previous abdominal surgery.

Safety Juan Thornhill (knee) and offensive lineman Martinas Rankin (knee) did not practice and remain on the physically unable to perform list. Cornerback BoPete Keyes also did not practice and remains on the non-football injury list. Reid confirmed the rookie suffered an orbital fracture prior to the start of training camp. Tight end Deon Yelder sat out with a groin strain.

Defensive tackle Derrick Nandi did not practice but the club did not disclose the reason.

Rookie works with No. 1 offense

With incumbent running back Damien Williams opting out of the 2020 season, the Chiefs wasted no time in getting first-round pick Clyde Edwards-Helaire on the field with the first-team offense.

Edwards-Helaire stands as the likely feature back for the Chiefs this season, making it important to Reid to get the rookie looks with the starting offense.

“That’s valuable work for him,” Reid said. “Is everything perfect? No, not right now, but he’s working like crazy to get it there, and he’s got a good attitude about it.”

Mudd worked on Marty Schottenheimer’s staff in Kansas City from 1989 to 1992 during his 38 seasons as an NFL offensive line coach. Reid hired Mudd for his coaching staff in Philadelphia in 2011. He was one of three recipients of the inaugural Paul “Dr. Z” Zimmerman Award presented by the Pro Football Writers of America for lifetime achievement as an NFL assistant coach.

“Howard was a great Chief as a coach,” Reid said. “Great mentor to me, and then I actually had a chance to hire him when I was in Philadelphia as my line coach.”

The Chiefs continue with their second day of full-speed training camp practices on Saturday, and will continue until their first day off on Tuesday.

Practices are closed to the public and fans will not be allowed in the Truman Sports Complex during practices.