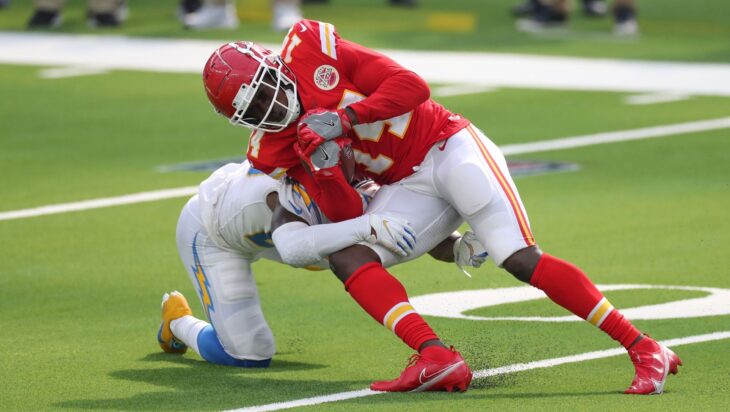 KANSAS CITY, Mo. — Sammy Watkins left the Chiefs’ 23-20 overtime win over the Los Angeles Chargers after taking a shot to the helmet from linebacker Denzel Perryman, and head coach Andy Reid wasn’t happy about it after the game.

“Sammy got a hit to the head that I thought was very questionable,” Reid said in his postgame press conference. “He got hit to the head. We’re not supposed to have those in our game here.”

The injury took place with a little more than 14 minutes left in the game and the Chiefs facing a third-and-4 from their own 11-yard line. Watkins took a short pass from Mahomes and turned upfield for an 11 yard gain. Cornerback Desmond King went low for a tackle on Watkins. As Watkins went to the ground, Perryman came in from the left side and appeared to lower the crown of his helmet toward Watkins, making contact with the helmet of Watkins.

Reid indicated he didn’t have a status update on Watkins’ condition after the game. The receiver walked off the field under his own power to the locker afterward and did not return to the game.

Watkins’ injury was one of several plaguing the Chiefs throughout the game. Cornerback Antonio Hamilton left in the second quarter after pulling up with a groin injury on punt coverage. Running back Darrel Williams also left the game with an ankle injury and did not return.

Defensive end Frank Clark exited the game with what the club described as an illness. Linebacker Anthony Hitchens briefly exited the game with a stinger. Fellow linebacker Damien Wilson cleared the concussion protocol after delivering a big hit on Chargers quarterback Justin Herbert and later returned to the game.

Helmet not intentional for Hill

On a rough day for the officials with questionable calls on the field, the Chiefs seemed to get one in their favor at the end of the 54-yard touchdown pass from Patrick Mahomes to Tyreek Hill.

Hill went to the ground after making the catch and somersaulted into the end zone for the score. Officials reviewed the play to see if Hill was touched by a defender, but the play stood as called on the field.

As Hill popped up to his feet his helmet came off. Although CBS rules analyst Gene Steratore thought the play merited a flag for unsportsmanlike conduct, Hill insisted the helmet removal was accidental.

“Actually when I fell my helmet came off,” Hill said. “I would never take my helmet off. I feel like when I’m on the field, it’s my responsibility to always keep my helmet on.”

Hill said taking your helmet off following a touchdown is a pet peeve with head coach Andy Reid and offensive coordinator Eric Bieniemy.

“I would never do that,” Hill reiterated. “If it did look like that, I promise you I didn’t take my helmet off. It was coming off. My helmet came off.”

Harrison Butker kicked his way into the franchise’s records books a few times on Sunday, tying the franchise record for longest field goal at 58 yards.

Chiefs team Hall of Honor member Nick Lowery was the first to pull off the feat. Lowery hit from 58 yards twice in his career, an achievement Butker pulled off twice against the Chargers. He didn’t know until after the game Lowery owned the club records.

“I’m fortunate to be a part of a great organization. I was able to make 56 yards last year, and now 58. I guess I got to break the record and beat Nick Lowery, hopefully next week, Monday Night Football.”

Butker now owns three field goals of 55 yards or longer, matching the club record of three held by Lowery. He also becomes the fifth kicker in team history to hit two field goals from 50 or more yards in a single game. Lowery pulled off that trick three times while Lawrence Tynes, Ryan Succop and Cairo Santos each did it once.

One more record for Butker – he’s now hit a field goal in 16 consecutive games, breaking the mark of 15 held by Tynes.

Travis Kelce’s 90 yards receiving moved him into fourth place in the franchise record book with 6,605 yards in his career, bypassing Henry Marshall’s total of 6,545. Next up for Kelce: Dwayne Bowe at No. 4 with 7,155 yards and Otis Taylor with 7,306. Both of those are within reach for Kelce this season, but he still has some distance to catch franchise leader Tony Gonzalez with 10,940. … Butker moved into sixth-place on the team’s all-time points scored list with 445 points, bypassing kicker Pete Stoyanovic with 442. He’s 17 points away from reaching Tony Gonzalez for fifth place at 462 points. … The Chiefs have now won 11-straight games including the regular and post-seasons. They can break the club record of 11 with a win next week. The 2015 Chiefs also reeled off 11-straight wins.

The Chiefs open as three-point underdogs for the Week 3 Monday night trip to Baltimore. The Ravens moved to 2-0 with a 33-16 victory over the Houston Texans. Kickoff is set for 7:15 p.m. central with the game airing nationally on ESPN and available locally on KMBC-9.