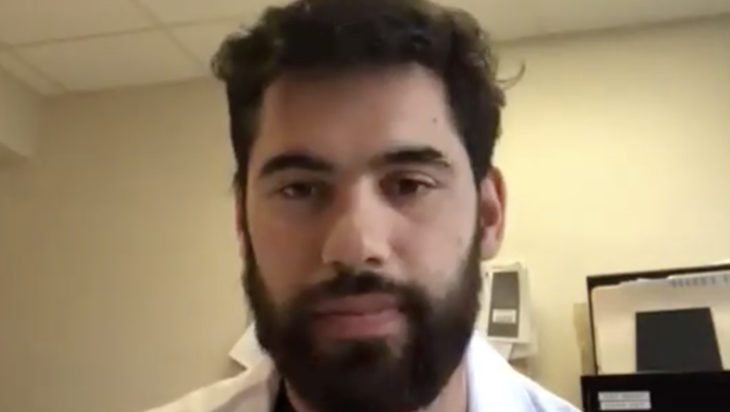 KANSAS CITY, Mo. — The only active NFL player with a medical degree says the league must make player health a top priority in the return to work from the COVID-19 shutdown, but Laurent Duvernay-Tardif also believes the NFL must consider other risks as it contemplates the beginning of training camp and the regular season.

“I think that the No. 1 thing is for sure to keep the players safe, but I think the NFL in general has also a responsibility towards the community and their fans,” Duvernay-Tardif said during a video chat with reporters Friday. “There’s a lot of questions, and it’s going to be interesting to see how that’s going to evolve in the next few weeks, months.”

The Chiefs offensive lineman serves on an NFL Players Association committee working with the league in evaluating the current situation and providing the rare perspective from a football player with medical knowledge.

“I’m not an expert,” Duvernay-Tardif said. “I’m sitting on that call, there’s people from like Stanford, Harvard, that study immunology and public health. I’m there to learn and maybe give a little bit of my perspective as a player.”

Last week Duvernay-Tardif began working at a long-term care facility in Montreal. He’s earned his medical degree from McGill University but hasn’t yet started his residency program so he doesn’t have status as a physician. But the 29-year-old chose to volunteer “working quote-unquote as an orderly” in order to provide a helping hand during a time of need.

“The help that the health care department needed was mostly as orderlies, so that’s what I’m doing,” Duvernay-Tardif said. “I’m doing also a little bit of nurse tasks, handing out medication, making sure the patients are all right.”

He says health care workers certainly have a feeling of apprehension, but he believes he’s taking the proper precautions when it comes to prevention and properly using personal protective equipment.

“I think everybody’s concerned, everybody’s kind of scared a little bit,” Duvernay-Tardif explained. “We’re wearing our visor and our mask all day long during the whole shift, washing your hands, there’s just so many precautionary measures in place in order to protect both you and the patient that it just makes everything heavier in terms of tasks. That’s why they need so many people.

“Yes, there’s a lot of medical professionals that have been sick from COVID or are in quarantine right now, but there’s also just more work to do on every floor, so that’s why they need people and that’s why I’m here right now.”

Following the end of his shifts at the long-term care facility, Duvernay-Tardif returns to an empty apartment in Montreal he’s using as a transitional zone. All his clothes go into the washer with a special cleanser and he takes a shower before returning to the home he shares with his girlfriend.

“Of course there are risks, but at the end of the day I think you got to look at from a community standpoint,” he said. “I think young, fit individuals working in at-risk and high-risk environment with the best protective gear possible, I think it’s the best way to fight this thing, and that’s why I want to contribute.”

The NFLPA committee on which Duvernay-Tardif contributes is one of several working groups the league established to plan the best path for moving forward with the upcoming season. Chiefs chairman and CEO Clark Hunt said last weekend the league will consider all options.

“Once we get past the draft it’s something that I’m sure that we’ll start discussing at the committee level first, then as an entire ownership,” Hunt said. “It’ll obviously be only prudent to have some contingency plans because we just don’t know how the pandemic will play out here over the next three-to-four months.”

Duvernay-Tardif doesn’t want to speculate on what will happen with the upcoming season but he expressed confidence the league is considering all appropriate alternatives.

“For sure there’s plenty of scenarios right now, plenty of different strategy in place, and it’s going to be interesting to see how that’s going to play out,” he said.