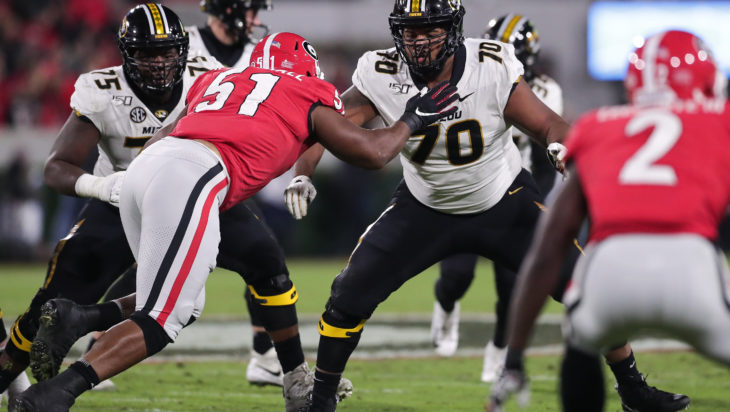 KANSAS CITY, Mo. — The Chiefs added 18 undrafted rookie free agents following the conclusion of the NFL Draft on Sunday, including Missouri offensive lineman Yasir Durant and a pair of cornerbacks graded among the top players remaining on the draft board.

“Any time you can get a couple 6-(foot)-6 guys inside there protecting Pat (Mahomes) will be beneficial,” Veach said. “With Darryl, he was an extremely productive player at Mississippi State. That’s a guy that we feel has center-guard flexibility, has done both there at Mississippi State.”

The Chiefs entered the weekend with a plan for tackling the free agency, and it appears to have worked as designed. The Chiefs landed most of their big targets, and they evened moved back into the draft in the seventh round to land cornerback BoPete Keyes. Their networking during the final hours of the draft revealed they couldn’t win a bidding war for Keyes as a free agent, to Veach made the move to draft him instead.

In addition to undrafted free agents, the Chiefs also signed safety Andrew Soroh, who spent 2019 offseason and training camp with the Chiefs. The former Florida Atlantic defensive back recently picked up experience in the XFL with the New York Guardians.

WR Andrea Baccellia, Washington
Baccellia didn’t draw much pre-draft buzz, but speedy 5-foot-10, 171-pound receiver posted a 4.38 40-time at the school’s combine in 2019. He finished his college career with 107 catches for 1,183 yards and five scores, and also averaged 11.9 yards on 10 rushes with a touchdown. Shares a similar size and built to former Chiefs receiver De’Anthony Thomas but doesn’t have the background as a returner.

CB Hakeem Bailey, West Virginia
Bailey was an all-conference cornerback at Iowa Western Community College before transferring to the Mountaineers where he played 35 games with 21 starts. Racked up 135 total tackles while picking off two passes and breaking up 18 others. Sports the length and size (6-foot, 188 pounds) the Chiefs covet at cornerback.

S Rodney Clemons, SMU
Clemson took a medical redshirt as a freshman and enters the league at age 23 but put up strong production for the Mustangs. Tallied 275 total tackles with 11 1/2 for a loss at SMU and also picked off seven passes with 34 others defensed. Second-team All-American Athletic Conference and team captain as a senior. Has the size and strength (21 reps on the bench press at the NFL Combine to play in the box and close to the line of scrimmage.

LB Omari Cobb, Marshall
Cobb earned co-defensive player of the year at Marshall last season while tacking up 114 total tackles, 7 1/2 for a loss and breaking up two passes. Turned in a strong pro day performance with a 40-yard time of 4.73 seconds, 37-inch vertical jump and 21 reps on the bench press.
At 6-foot-4 and 223 pounds, Cobb is a bit tall and lean for the position but could profile as an outside linebacker in the Chiefs’ 4-3 scheme.

CB Javaris Davis, Auburn
Davis is a bit undersized for the position at 5-foot-8, 183 pounds but NFL.com listed him as the top-graded player remaining on the board following the draft. His production in the SEC stands out. He picked up 150 tackles in 49 career games, including 11 for a loss with two sacks. His ball skills, however, belie his stature. He posted eight interceptions for the Tigers and broke up another 35 passes. His size 4.39 speed should allow him to keep up with almost anyone.

OL Yasir Durant, Missouri
The 6-foot-6, 331-pound Durant was a three-year starter at left tackle for the Tigers. Likely needs to add lower body strength at the NFL level but has a strong upper body and uses his hands well to fight off defenders. Veach believes he could slide in to play guard long term.

OG Jovahn Fair, Temple
Fair won the starting job at left guard as a freshman and held on to the job through four seasons and 46 games played. The 6-foot-2, 310-pound Fair wore No. 70 in college, although he earned “single-digit” status at Temple – the Owls award single-digit jerseys to players considered the toughest on the team. Won Temple’s male scholar-athlete of the year award in 2018 and as a senior made the watch list for the Outland Trophy as the nation’s top interior lineman.

WR Maurice Ffrench, Pittsburgh
Ffrench said a school-record for receptions last season with 96, eclipsing the record of 92 set by Larry Fitzgerald. He finished his college career with 156 catches for 1,637 yards and 10 scores, and also showed his speed and elusiveness on the ground while rushing for 379 yards and four touchdowns while averaging 8.4 yards per carry. The 5-foot-10, 194-pound Ffrench told the Pittsburgh Post-Gazette he watches Tyreek Hill’s YouTube page for tips on how to improve his technique.

WR Aleva Hifo, BYU
Hifo (his name is pronounced uh-leh-vuh hee-fo) possesses sub-4.5 speed and hauled in 42 catches for 483 yards and three touchdowns for the Cougars as a senior. He appears better suited to special teams roles after averaging 15.9 yards per punt return last season. Plenty of athleticism at 5-foot-10, 202 pounds, and he could find a role as a gadget player on offense who can lineup in multiple positions, including the backfield.

CB Lavert Hill, Michigan
The 5-foot-10, 190-pound Hill earned first-team All-Big Ten the past two seasons and demonstrate good ball skills with six interceptions and 29 passes broken up in 37 starts for the Wolverines. Didn’t work out at the NFL Combine by choice, and he graded as the No. 10 remaining player on the board following the draft by NFL.com.

S Jalen Julius, Mississippi
Julius earned eight starts in his redshirt freshman season and turned into a regular contributor in the Ole Miss backfield in 45 games over four seasons. Battled injuries as a sophomore, but the 5-foot-10, 92-pound Julius tallied 68 total tackles last season including eight for a loss and broke up seven passes. He’s a speedy safety who can cover as well, a much-desired trait for safeties in Steve Spagnuolo’s system.

WR Kalija Lipscomb, Vanderbilt
Lipscomb led the SEC in receptions as a junior in 2018 with 87 catches for 916 yards and nine touchdowns. The Commodores offense struggled in 2019, but Lipscomb still led the team with 47 catches for 511 yardsThe 5-11, 207-pound Lipscomb posted a 4.57 40 speed at the NFL Combine. A 79-inch wingspan allows him to play a bit taller than his size. Finished his career fourth all-time in school history with 198 receptions.

WR Justice Shelton-Mosley, Vanderbilt
The 5-foot-10, 196-pound receiver earned FCS first-team All-America honors at Harvard, hauling in 148 receptions for 1,921 yards and seven touchdowns in four seasons. He served as one the FCS level’s best return specialists, averaging 24.6 yards on kick returns and 14.4 yards on punt returns with three touchdowns for the Crimson. Moved to the SEC as a graduate transfer in 2019, ranking fifth in the SEC with 18.1 yards on kickoff returns and averaging 9.1 yards on punt returns. He majored in economics at Harvard while earning Academic All-Ivy League and worked on his master’s degree at Vanderbilt’s business school.

P Tommy Townsend, Florida
Townsend was a semifinalist for the Ray Guy Award as the nation’s best punter last season, averaging 44 yards per punt. He booted 11 kicks more than 50 yards and put 20 of his 42 punts inside the 20-yard line. His brother Johnny preceded him as the punter at Florida before getting drafted by the Raiders in the fifth round of the 2018 NFL Draft.

WR Cody White, Michigan State
Good size at 6-foot-3, 217 pounds, White set a Spartans freshman record with 490 receiving yards in 2017. Caught 66 passes for 922 yards and six touchdowns as a junior last season and ran a 4.66 40-yard dash at the NFL Combine. His father Sheldon was drafted by the New York Giants No. 62 overall in 1988, and he played six seasons at linebacker before spending 19 seasons in the front office with the Detroit Lions.

LB Bryan Wright, Cincinnati
Wright earned first-team All-American Athletic Conference last season while tacking up 100 total tackles, including 13 1/2 for a loss. The 6-foot-3, 238-pound Wright was an-all everything in high school, passing for 1,619 yards and 16 touchdowns, rushing for 541 yards and 13 scores and catching 13 passes for 161 yards and two touchdowns. On the basketball court, he averaged 11.3 points and 8.4 rebounds as a senior and helped his team to a state title his sophomore season.