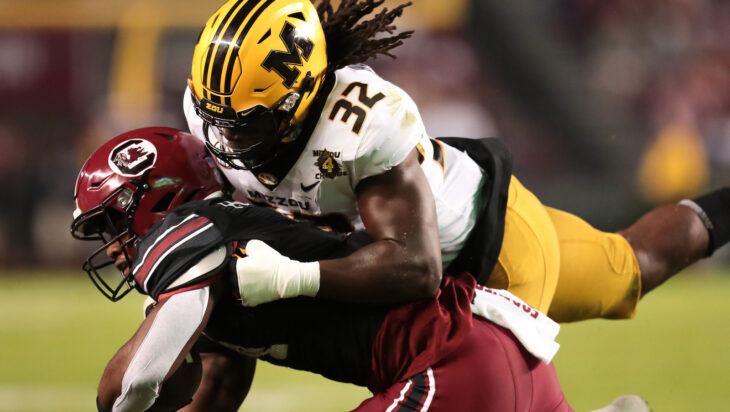 Chiefs general manager Brett Veach saw plenty of linebacker Nick Bolton playing football down Interstate 70 for the Missouri Tigers, and when Bolton’s name was staring him in the face on his draft board Friday night, it proved an easy call.

“He’s a guy that can come in here and play both at the Mike position and the Will position,” Veach said after choosing Bolton with the No. 58 overall selection in the second round of the 2021 NFL Draft. “He’s got sideline-to-sideline range. Tough, smart, can make all the calls, has made all the calls.”

Head coach Andy Reid concedes to a soft spot in his heart for Missouri, where he served as an assistant coach from 1989 to 1991, but there’s nothing soft about Bolton’s game.

“What you’re going to get with him is just an all-out aggressive, smart football player,” Reid said. “Not the biggest guy but very, very tough, great tackler, great ball skills in the pass game part of it, tremendous leadership.”

The addition of Bolton addresses both short-term and long-term needs for the Chiefs. The club returns just four linebackers who played more than 100 snaps last season with Anthony Hitchens, Ben Niemann, Willie Gay and Darius Harris. While Gay played primarily Will and Sam linebacker positions as a rookie, Veach sees Bolton stepping into a reserve role at middle linebacker behind Hitchens.

“You look at Anthony Hitchens, he’s one of the guys who does a lot for us, but when Hitch goes down you, know we’re really looking to add depth there,” Veach said.

One knock against Bolton could actually work in his favor. At 5-foot-11, 237 pounds, Bolton lines up smaller than the typical downhill linebacker. He reminds Reid of another similar stature linebacker, Mark Simoneau, who spent three seasons with Reid in Philadelphia and finished his career with the Chiefs in 2010.

“(Bolton) moves around well, he can cover in the pass game, the RPO game he’s got a good feel for that,” Reid said. “He still can shed and get off of the big guys, and that becomes important.”

Coaches at Missouri rave about Bolton’s leadership and football IQ. Bolton said he relies on his intelligence and instincts, traits he believes will allow him to compete for playing time on day one in the NFL.

“That’s kind of how I play,” Bolton said. “I kind of feel like bringing that to an NFL team, put myself into a position to play. I’d love the opportunity to. Just kind of being an intelligent player, being smart, playing fast, physical tough, all the characteristics you need to be a great NFL linebacker, I feel like I have those characteristics.

Just 20 minutes before Bolton became a Chief, Gay, a second-round selection of the team last season, foreshadowed the selection on Twitter with a short message: “Nick Bolton I feel it.”

The relationship between Bolton and Gay goes beyond competing against one another in the SEC.

“Interesting story,” Bolton said. “When I was looking to go to college at Mississippi State where Willie was at, I went to a camp down there. He kind of showed me around, that’s when I first met him. We kind of have a little history.”

Now, Bolton gets his chance to play alongside Gay in the NFL.