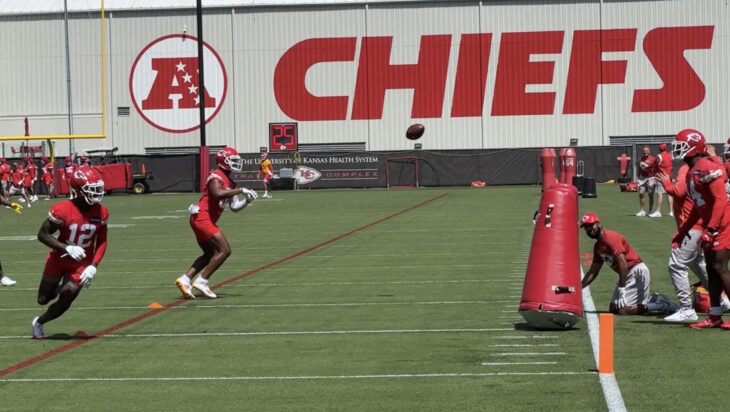 KANSAS CITY, Mo. — The Chiefs opened their three-day mandatory minicamp on Tuesday, the final period before the team takes a break from offseason workouts and prepares to report to St. Joseph, Missouri for training camp in late July.

Much of the focus this week, just as it has been for the entire offseason program, is on integrating a new fleet of pass catchers with quarterback Patrick Mahomes into head coach Andy Reid’s offensive factory. Free-agent receiver JuJu Smith-Schuster says “the sky is the limit” for the retooled Chiefs’ passing attack.

“I think that with this offense this year, I think we’ve got so many guys who can do so many different things,” Smith-Schuster said after Tuesday’s practice. “It’s all around. We’re not just, ‘Hey you go here, you go there.’ Everyone plays every position. Everyone knows what everyone is doing, and I think that right there helps us out a lot going into the season.”

With Tyreek Hill gone to Miami, Mecole Hardman is now the longest-tenured wide receiver on the Chiefs roster entering his fourth campaign. He believes the offense will remain explosive despite the departures of Hill, Byron Pringle and Demarcus Robinson.

The club opened their mandatory minicamp with mostly a full house and no known unexcused absences. Players who do not attend the minicamp are subject to progressive fines of up to $15,515 for missing one day and totaling up to $93,085 for skipping the entire camp.

Defensive end Frank Clark, who was not present during the voluntary organized team practice activities (OTAs), was not seen on the field but the club described his absence as excused. Tuesday was Clark’s 29th birthday but it’s unclear if that was the reason for the absence.

Left tackle Orlando Brown Jr. remains apart from the team while awaiting a resolution to his contract status. He remains unsigned and is not subject to fines due to missing the minicamp.

Also absent on Tuesday were wide receiver Justyn Ross, tight end Blake Bell, defensive lineman Malik Herring and cornerback Rashad Fenton. Fenton is known to be continuing rehab for offseason shoulder surgery but the team did not detail whether the other players were receiving treatment or were excused for personal reasons.

Wide receiver Daurice Fountain, who did not appear on the field during OTA practices open to the media, was back at practice but did not participate in team drills.

Offensive lineman Lucas Niang (knee) appeared on the sidelines as an observer only.

Cornerbacks Trent McDuffie and Joshua Williams did not finish practice and left alongside a member of the training staff. The club did not identify a reason for their departures.

Hot and windy conditions greeted the Chiefs on the first day of the mandatory minicamp. Temperatures started at 87 degrees for the 10:55 a.m. start time with winds at 20 miles per hour, gusting over 30 miles per hour at times.

Perhaps due to the heat, the practice moved briskly and clocked in under two hours. After conditioning, individual drills and a group installation period, the club moved into team blitz, team pass, 7-on-7 and team offensive sessions.

Ken Flajole carries the title of outside linebackers coach but he’s much more than that for defensive coordinator Steve Spagnuolo. His role remains large for the Chiefs in his second season in Kansas City. His voice can often be heard on the practice field, and when Spagnuolo is running through instructions and teaching with the first-team defense, Flajole is doing the same with the backups on the other side of the field. His past experience as a defensive coordinator and relationship with Spagnuolo remains a big asset for the Chiefs.

The offense won most of the day — it is a passing camp, after all — didn’t turn the football over at all. The team blitz session belonged to the defense, however, with Mahomes going 3-of-8 passing. He wasn’t helped out by Mecole Hardman (more on that later) but didn’t connect with tight end Matt Bushman for a big gain down the right side and later dropped a perfect throw into the hands of Clyde Edwards-Helaire on a wheel route out of the backfield.

The defense did its job during that period, with rookie defensive end George Karlaftis getting pressure on the quarterback and also elevating on throws to clog up passing lanes, The defense tipped one pass at the line but it was difficult to identify who deserved the credit.

During the 7-on-7 period, Mahomes drifted to his right searching for a target but found no one open. He eventually bought enough time (no pass rush, after all) and found receiver Omar Bayless cutting open toward the end zone and dropped a dime into his hands. Arguable may have been a sack in live-action but the coaches didn’t blow the play dead.

Mahomes again showcased his arm strength during the final team period. On the first play, Mahomes fired a dart to Travis Kelce who made a catch on the ball over his head with cornerback L’Jarius Sneed dropped all over him. On his next-to-last play, Mahomes zipped a ball that seemingly passed a half dozen defenders before finding the hands of JuJu Smith-Schuster.

It’s an obvious choice but there is no doubt that Mahomes has been in midseason form through OTAs and on the first day of minicamp.

At this point during the veteran minicamp in 2021, Mahomes had only recently returned to the practice field after undergoing surgery for a turf toe. With no limitations this offseason, Mahomes has been busy building a rapport with the long list of receivers getting looks with the first-team offense.

Honorable mention: TE Jordan Franks. There is no doubt that the 26-year-old tight end faces an uphill position battle with the likes of Travis Kelce, Blake Bell, Noah Gray and Jody Fortson in the tight end room but on Tuesday Franks made a compelling case he belongs.

Franks connected with two different quarterbacks for four catches on the day, none more impressive than a long touchdown reception from Chad Henne. Franks ran a skinny post route splitting the safeties downfield, and Henne made a perfect read, laying out the ball beautifully in front of Franks. The tight end made the catch in stride and was off to the races for the score.

Franks is entering his fifth NFL season after stints with Cincinnati, Philadelphia and Cleveland. He has two catches for 37 yards in his career.

Mahomes and the no-look pass can catch defenders napping but Tuesday showed that even his own teammates can be caught off guard.

During the 7-on-7 period Tuesday, Mahomes looked outside to shake off linebacker Willie Gay Jr. and zipped a pass over the middle to receiver Josh Gordon, who made the catch in stride for a gain.

Wide receiver JuJu Smith-Schuster said he fell for the fake from the sideline.

“I guess everybody saw it because I thought I was the only one who saw,” Smith-Schuster said. “But it got a linebacker, Gay, it threw him off and everyone was just like this, thinking he was going outside but he went inside. I was just like, ‘Wow.'”

It’s also not the first time Mahomes crossed up Smith-Schuster with a no-look throw. The first time came when the two were teammates on the AFC Pro Bowl team in January 2019.

“He threw the ball to me and it went through my hands because I didn’t expect him to throw the rock to me,” Smith-Schuster said. “He was drawing out right, I was cutting across field and he was looking this way down the field but he threw a bullet straight to me. I went to the sideline and I was like, ‘Ok, that’s Pat for you.'”

Now the question becomes will Smith-Schuster be ready when a no-look throw comes his way.

“That’s what I got to expect,” he said. “I haven’t gotten one yet this training camp, so we’ll see.”

Last offseason Chiefs coaches spoke of rebuilding the confidence of safety Juan Thornhill. Entering his pivotal fourth year in the league — and a contract season to boot — confidence doesn’t appear an issue for a happy and healthy Thornhill.

“My confidence is on the high, and I feel like I can run and compete with anybody on the field,” Thornhill said. “I’m going to have an All-Pro season. I’m putting that out there, and if you all want to take that down, record, it doesn’t matter because I’m committed to doing that.”

While the torn ACL injury Thornhill sustained in the regular-season finale of his rookie season in 2019 has largely defined his career, he has still never missed a regular-season game. In 17 games with 12 starts last season, Thornhill racked up a career-high 64 total tackles. Thornhill concedes he played at times with a lack of confidence and under the pressure to play perfectly during the past two seasons, but now he feels fully healthy for the first time since his breakout rookie season.

“I’m all the way back,” Thornhill said. “To me, if you’re out there watching me play, I’m flying around right now, I’m not thinking about the knee at all.”

Perhaps most of all, Thornhill is enjoying being a veteran leader in a young secondary and having fun playing alongside new teammate Justin Reid.

“We’re not hitting right not but the thing is we’re in position to make those big plays and big hits,” Thornhill said. “So once the shoulder pads get on, it’s going to be a lot of fun.

The crowded Chiefs running back room welcomed back an old friend on Tuesday with the club official announcing the signing of free agent Jerick McKinnon. McKinnon played in 13 games for the club last season, rushing for 62 yards on 12 carries while catching 13 passes for 107 yards and a score.

The club made room for McKinnon on the roster by waiving offensive lineman Darryl Williams. Williams spent the past two seasons on the club’s practice squad and was competing as a backup center behind Creed Humphrey. That leaves Austin Reiter, Nick Allegretti and Michael Caliendo as the likely candidates to backup Humphrey.

Wide receiver Mecole Hardman returned to the practice field on Tuesday after tweaking his hamstring during OTAs.

Hardman started practice slowly, dropping back-to-back passes from Mahomes during the team blitz period. The second drop came after a perfectly thrown deep ball on a corner route to Hardman, who displayed frustration by ripping off his helmet after the play.

“Not being out there for a minute, you want to be perfect when you go back out there,” Hardman said. “It’s one of those things that just frustrated with yourself and knowing I can be better. I can definitely be better than that. But I actually was back and caught everything else. Just one of those moments.”

Hazelton spent time at Ball State and Virginia Tech before finishing his college career with the Tigers in 2021. The 6-foot-3 Hazelton caught 163 passes for 2,231 yards and 21 touchdowns across four seasons. He’s spent time with the Green Bay Packers and Houston Texans.

Parker entered the league as an undrafted free agent in 2020 and spent time with the Dalla Cowboys and Carolina Panthers. He was a two-time first-team all-conference performer at Rhode Island, finishing his career with 216 catches for 3,460 yards and 30 scores in 44 games.

Parker nearly made a circus catch along the sideline during a 7-on-7 period, leaping to make a grab and get two feet inbounds before a defender punched the ball away. He connected for a reception from quarterback Dustin Crum on the final play of practice during an 11-on-11 period.

The Chiefs are back at it Wednesday for the second day of their three-day minicamp with practice at 10:55 a.m. The session is open for select season-ticket members by invitation only.

The club is sent to conclude minicamp on Thursday with an 11:15 a.m. workout, although this practice has been canceled in the past in lieu of the team’s annual conditioning test. That’s a distinct possibility again with a forecasted high temperature of 94 with a slight chance of rain.