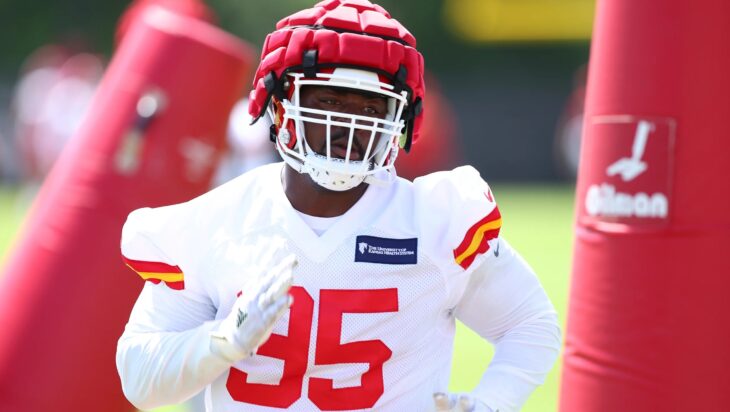 Twice in the fourth quarter, Joe Burrow and the Bengals faced third-and-7 and the quarterback eluded pressure in scrambling for first downs extending the drive. On the first conversion, Jones wrapped up Burrow in the backfield only for the quarterback to escape. Jones didn’t give up, however, but still couldn’t bring down Burron on the second effort.

“I missed some of the biggest plays of the game with the Joe Burrow sack,” Jones said after the team’s second minicamp practice on Wednesday. “(I) used that as motivation the whole offseason. Feel like I would have made those sacks, the game would have been different. I take accountability for that.”

The offseason started slowly for Jones, however, who required rest for his injured left wrist. Jones sustained ligament damage in the wrist early in the season and wore a hard cast on his left hand during much of the campaign. He indicated Wednesday he didn’t require surgery on the wrist.

Jones started last season at defensive end and discovered one fact early in the process.

“I learned the DE position is hard as hell,” Jones said. “It’s hard as hell. But it was a learning curve for me, especially mental wise. Knowing the sets, knowing the drops, I think it improved my overall game as a player mentally being able to know a lot of different positions. I think that I carry that on to this year and move on from it.”

Where Jones lines up in 2022 doesn’t matter as much to him as the opponent on the other side of the ball. He trusts defensive coordinator Steve Spagnuolo and defensive line coach Joe Cullen to find the best matchups.

“Every game plan is different, every team offers different schemes when you go in week-by-week,” Jones said. “I think once we get in the season we can kind of scheme on that and wherever coach Spags and Joe feel comfortable with me playing then I think I’m good there.”

Another warmer-than-average spring day greeted the Chiefs on Wednesday with the temperature at 86 degrees at the start of the 10:55 a.m. practice. Fans were also in attendance for the first time this spring, with a few hundred season ticket holders packing the temporary seating area installed on the third practice field.

Wednesday proved a good day for the defense, with a caveat — it wasn’t clear what situations the coaching staff was simulating during team periods and the 7-on-7 session. The press is situated in the end zone, making it impossible to view the down markers. It did appear, however, that the offense spent most of the day working behind the chains in third-and-long or fourth-down scenarios. Quarterbacks were pushing the ball downfield and making riskier throws than normal in practice.

Wednesday’s workout started with conditioning followed by a special teams session focusing on kickoff and kick coverage, individual drills, and a group installation period. In case you’ve ever wondered, yes, NFL receivers do practice making one-handed catches just in case they’re needed. Receivers coach Joey Bleymeier had his group run a drill Monday where they would run a short out route, catch a pass from one quarterback, then cut back toward the line of scrimmage and catch a second out route from another passer while holding on to both footballs.

That led to the first team period, during which the offense started out steady. Patrick Mahomes opened with a couple of quick completions to Travis Kelce and Mecole Hardman before a rare miss deep to Marquez Valdes-Scantling (this appeared to be a free play after the defense jumped early). Rookie running back Isiah Pachecho showcased his ability to cut upfield after hauling in a short pass from Shane Buechele.

It was during the team pass period when the defense began to make some plays. Mahomes took a deep shot toward Mecole Hardman in the end zone, throwing across his body while rolling out to the right side. The ball sailed on Mahomes, perhaps altered a bit by the wind, but landed in the hands of rookie safety Bryan Cook for an interception. Cook nearly picked up another interception on the following play when he got his hands on a deep corner throw from Chad Henne to Cornell Powell.

The defense picked up its second interception on the final play of the team passing period with cornerback Brandin Dandridge (Missouri Western) intercepting a Dustin Crum pass.

The defense continued to deliver big moments during the 7-on-7 period. Mahomes again got off to a quick start with completions to Kelce, JuJu Smith-Schuster and Kelce again before free-agent cornerback Luq Barcoo posted the first of two passes defensed. Interception No. 3 belonged to rookie cornerback Jaylen Watson, who picked off a pass from Buechele.

One of the biggest plays during 7-on-7 belonged to tight end Jody Fortson, who hauled turn an intermediate throw from Mahomes into a big gain. Fortson has been ahead of schedule in his return from a torn Achilles and appears in strong form heading toward training camp.

The 7-on-7 period finished with Buechele hitting tryout receiver Aaron Parker on a deep corner route for a touchdown. That was a rebound for Parker, who dropped a catchable pass from Crum on the previous play. Aside from that drop, Parker has been very solid in his tryout.

The practice concluded with one more quick team period, and Mahomes threw four-straight completitions before missing on a deep throw to receiver Omar Bayless. The defense capped off its big day with a fourth interception and the second pick of the day for Cook. The rookie safety took away a Henne pass intended for Bayless.

Player of the day: S Bryan Cook. Cook made this a pretty easy call with two interceptions, but most significantly for the Chiefs it shows enormous growth for the rookie defender during the offseason program. Just like most rookies, Cook hasn’t been perfect but he’s stood out for his communication on the field, his high-end motor and his never-give-up mentality. He shows the instincts that made him a second-round pick even if everything hasn’t been completely smooth thus far. He expects to enter training camp as the team’s No. 3 safety and in line for plenty of playing time as a rookie.

Defensive end Frank Clark was excused from practice for the second-straight day. NFL Network reported Wednesday Clark is excused awaiting the birth of a child.

Jones said he spoke to Clark on Tuesday and wished his teammate a happy 29th birthday.

“Me and Frank have been in contact throughout the offseason,” Jones said. “I understand. He’s doing what he has to do to make sure he’s good for this season, and we support him.”

Nine other Chiefs also did not practice on Wednesday, including rookie cornerback Trent McDuffie. He exited Tuesday’s workout under his own power with an athletic trainer but the team did not provide an injury update.

Left tackle Orlando Brown Jr. remains away from the team as he remains unsigned. The Chiefs and Brown have until July 15 to reach terms on a contract extension, otherwise, he can only play under a one-year deal for the 2022 season.

Newly signed running back Jerick McKinnon did not practice on Wednesday. Wide receivers Damon Hazelton and Aaron Parker are continuing to take part in camp on a tryout basis.

The 2021 season was supposed to become a breakout campaign for linebacker Willie Gay Jr., but a toe injury starting the season, the premature birth of his son in October, and a January arrest for a misdemeanor charge of criminal property damage caused Gay to consider taking time off from the game.

“I was going to take some time off honestly, but I just kept praying and staying strong,” Gay said. “My teammates kept me encouraged. It was hard the beginning of the season.”

The toe injury kept Gay on injured reserve through the first four weeks of the season. He returned in a backup role in the Week 5 loss to Buffalo the rejoined the starting lineup the following week against Washington. In Weeks 7-8 against Tennessee and the New York Giants, Gay tallied 11 total tackles with two interceptions. That performance provided him with a boost of hope.

The Tennessee game came four days after the Oct. 20 birth of his son, who was delivered 14 weeks premature. The long days on the practice field and late nights at the hospital took their toll. Gay still felt angry and stressed despite his play on the field but his teammates and coaches rallied to support him.

“Chris (Jones) reached out to me, Tyrann (Mathieu), just really all the guys on defense, offense, everybody, because they knew what I was going through with all the situations outside of here,” Gay said. “With him being born so early, I’m at the hospital every day at practice, and it was so tough, to like 11 o’clock after being out of practice at 6 o’clock. They helped me a lot and helped me get through those times.”

This spring it’s been hard to miss Gay’s smile on the sidelines and boundless energy on the field. He’s applied for a diversion program to address the January misdemeanor charge, and most importantly his son is out of the woods.

“He’s healthy now, doing good, so that’s some weight taken off my shoulders,” Gay said. “I just keep my head down, stay focused here in this building, and try to keep everything outside of here in line and stay focused.”

During Tuesday’s practice, Gay found himself falling victim to Patrick Mahomes and the no-look pass.

“Yeah, you saw that?” Gay asked rhetorically when the question arose Wednesday, adding that one of his coaches accused him of keeping his eyes on Mahomes too long. Gay begged to differ.

“I said, ‘Coach, I looked at the receiver, he sat down in his route,'” Gay explained. “‘Patrick stared him down, I jumped the route, and the next thing I know he threw it like this.’ Honestly, nothing too much I can do about that.”

Even receiver JuJu Smith-Schuster said he fell for the fake. “Exactly,” Gay said. But he did find a bright side in the episode.

“It’s just only one quarterback in the league can do that I think, and I’m on his team so we’re pretty good,” Gay said.

Running back Ronald Jones hasn’t been known in the past for his exploits as a pass-catcher. While he reached career highs in 2019 with 31 catches for 309 yards, last season he hauled in just 10 receptions for 64 yards. Pro Football Focus ranked him No. 109 out of 155 running backs in receiving grades last season. His pass blocking grades were even lower, ranking No. 147.

Yet the Chiefs have been giving Jones plenty of work during the offseason program, throwing him the football out of the backfield as well as working him split out wide and in the slot. Jones worked himself wide open during Wednesday’s 7-on-7 period in hauling in a pass from Henne for a big gain.

“In order to get on the field, I’m going to have to do some of that work,” Jones said. “That would be cool too, I’m always down for that.”

Pass protection isn’t something running backs can work on during the offseason program when contact isn’t allowed, but Jones expects plenty of work in that role during training camp, especially when the pads come on for the first time.

“Definitely working on it going forward,” Jones said. “I got to learn new pass protection concepts. Yeah, got to keep the quarterback up, you know that’s No. 1.”

The Chiefs have just one more offseason workout remaining on Thursday, and afterward head coach Andy Reid and quarterback Patrick Mahomes will meet with reporters wrapping up the offseason.

The next time the Chiefs will appear on the practice field will be at training camp in St. Joseph, Missouri, starting in mid-July. Been on the lookout for the team’s training camp schedule, which could be released by the end of this week.