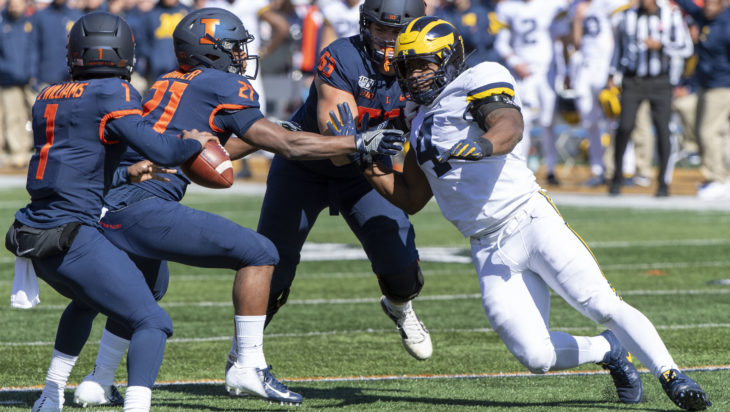 KANSAS CITY, Mo. — Defensive end Mike Danna didn’t land an invite to the NFL Combine, and circumstances beyond his control wiped out his pro day at Michigan but when given the opportunity to showcase his skills at the East-West Shrine Bowl in January, he made the most of it.

“I think that played a huge part of why I’m in the position I’m in right now,” said Danna, who landed with the Chiefs in Saturday’s fifth-round of the NFL Draft, No. 177 overall. “Going into that senior bowl, the Shrine Bowl, I knew I had to have a really good week, I knew what was at stake and I had to show up. I feel like that whole week I did what I had to do, and I took care of business the right way and it paid off.”

Danna could have sulked from failing to land an invite to the combine despite picking up 38 total tackles and three sacks for the Wolverines this season, but he instead he used the snub along with the cancellation of the Michigan pro day as further fuel for the fire.

“I respond to the adversity not being able to have a pro day because of the whole pandemic and not being able to get a Combine invite,” Danna said. “All that played a huge role to who I am and I wouldn’t want to be in any other position because I had to put all the chips on the table and it’s just a blessing to be in my position right now.

The Shrine Bowl provided Danna the opportunity he needed to validate the work ethic and talent he demonstrated first at Central Michigan for three seasons before making a graduate transfer to Michigan in 2019. Chiefs area scout Pat Sperduto first put Danna on the team’s radar after his 2018 season at Central Michigan where he tallied 66 tackles, including 15 for a loss with 9 1/2 sacks.

Sperduto thought Danna would leave for the NFL after graduating from Central Michigan and says he would have been drafted a year ago. But Danna opted to take a graduate transfer to Michigan, where the Chiefs watched how Danna would hold up against the stiffer competition.

“We got to see what he did, and it was the same type of stuff where you could see his strength, you could see his power, explosion through his hips,” Sperduto said. “We kind of knew that, OK, this is still a really good football player.”

Danna measured in at 6-foot-2, 257 pounds at the Shrine Bowl. He played closer to 255 pounds at Central Michigan but bulked up around 270 pounds at Michigan to play multiple positions along the line including kicking inside. Sperduto said he could see Danna bulking up in the NFL to occasional shift inside to a 3-tech position in subpackages, but he views him for now as an edge player under defensive coordinator Steve Spagnuolo.

“I think his natural position is going to be as a defensive end for us, and then hopefully the coaches, that’s their job is they find the best possible role for him,” Sperduto said. “I guarantee he’ll be a core teamer, so (special teams) coach (Dave) Toub will love him. And then however the defensive staff, coach Spags and (defensive line) coach Brendan Daly decide to use him, he’ll adapt to it. He’s going to adapt to whatever role you give him.”

“I always watch Frank Clark,” Danna said. “Just to play with him is a dream come true.”

Most draft analysts label Danna as a project. Sperduto believes he can develop into a productive NFL player due to the work ethic, high character and strong practice habits he displayed in college.

“You can tell he was one of the hardest workers at Central and then same thing once he got to Michigan,” Sperduto said. “I think that’s kind of what we’ll get when he walks through the door.”