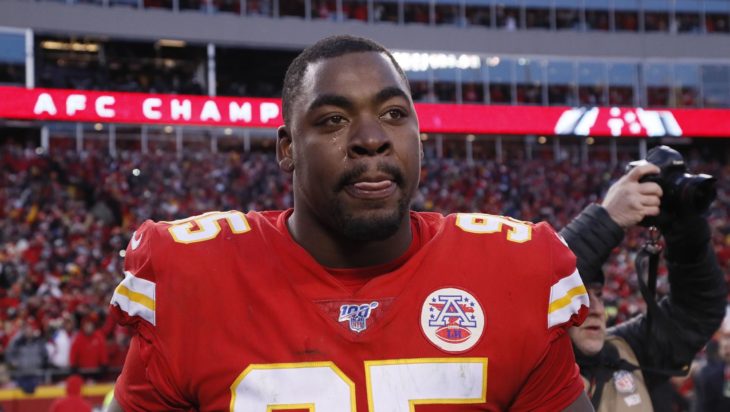 KANSAS CITY, Mo. — With the NFL Draft looming in just one week, the Chiefs appear no closer to finalizing a long-term deal with defensive tackle Chris Jones. But general manager Brett Veach on Thursday said dialogue continues between the club and Jones’ agents Michael and Jason Katz.

“We’ve had a lot of discussions with Chris and the Katz brothers and we continue to have that,” Veach said. “It’s a unique environment in which we’re working with and we were able to kind of navigate the free agency period and retain some guys. We’re going to work through the draft and we’re going to continue to dialogue.”

The Chiefs officially designated Jones with the non-exclusive franchise tag on March 16, guaranteeing him a one-year contract offer worth $16.126 million for the 2020 season. The club continues to express an interest in keeping Jones in a Kansas City uniform in 2020 and beyond, a point which Veach reiterated on Thursday.

“We know how talented Chris, I think the franchise tag speaks for it,” Veach said. “We certainly are going to work to maintain him, not just for next year but for the future.”

The Chiefs have until July 15 to finalize a long-term extension with Jones. After that date, the defensive tackle can only play the 2020 season under the franchise tag.

But the NFL Draft serves as an early deadline of sorts for players under the franchise designation. If the Chiefs choose to trade Jones, a deal makes the most sense prior to the draft. The Chiefs currently hold only five selections in the 2020 draft, and Jones could potentially return a significant haul for the club in terms of draft capital.

The Chiefs are no strangers to trades involving franchise players and draft picks. Last season Kansas City dealt linebacker Dee Ford, on whom they used their franchise tag in 2019, to the San Francisco 49ers in exchange for a second-round choice in 2020. Just days before the draft, the Chiefs acquired the rights to edge rusher Frank Clark. In exchange for a 2019 first-round selection and swap of third-round picks. The Seahawks designated Clark as their franchise player last offseason.

If the Chiefs choose to keep Jones in the fold for 2020, they can gain salary cap relief by negotiating a long-term deal. The NFLPA salary cap report shows the club with just $1,687,671 in available cap space counting their top 51 contracts. That’s not enough, however, to accommodate this year’s draft class, the full 53-player roster, a practice squad and injured reserve players.

Veach says the salary cap isn’t a concern for him.

“You may say, ‘Well, shoot, they don’t even have enough to sign a draft class,’” Veach said. “But the cap is flexible and what we’re able to do is flexible, and there’s an array of moving parts that we feel confident in so as far as doing some business from here to the season or signing our draft picks, we have a plan that we’ve been working off of all along. We feel confident in that.”

He also feels no need to rush a deal with Jones with nearly three months remaining before the deadline to sign an extension.

“We also have a lot of time,” Veach said. “I think the deadline in getting a deal done is July 15, so there’s a lot of time to continue the dialogue and to work on something with Chris.”