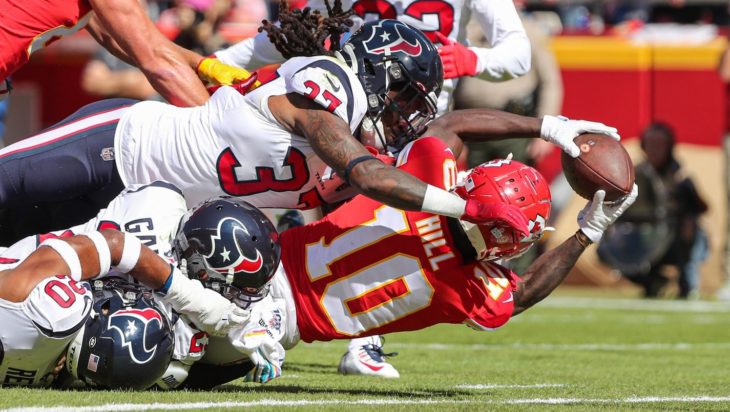 In two meetings at Arrowhead Stadium last season, the Chiefs and the Houston Texans lit up the scoreboard, combining for 137 points in the two matchups in contest filled

“Be Where Your Feet Are”

In the words of Patrick Mahomes’ college baseball coach, Tim Tadlock, now more than ever is the perfect time to focus and “be where your feet are.” The Chiefs can’t look back at the success they had last year, forward to future success they are planning or even past the game to the community issues from COVID-19 and social unrest. The players instead need to live in the moment and focus on the task at hand and the challenges a talented Houston Texans team will provide in the first game of an unusual year.

Mature In A Hurry

The suspension of cornerback Bashaud Breeland means Antonio Hamilton, Rashad Fenton and rookies BoPete Keyes and L’Jarius Sneed must step up and fill the void. Facing a talented receiving corps from Houston with no pre-season to prepare in a game-like atmosphere, this young group needs to grow up quickly.

The lack of a pre-season to work out the kinks and develop in-game chemistry sets up this game to be filled with busted coverages, missed assignments and poor tackling and blocking. The winner of the game could very well be the team that avoids putting themselves in too many deficit situations.

All Eyes On Deshaun Watson

Fresh off a crushing defeat in the playoffs at the hands of the Chiefs then losing his top receiver before signing a new mega-contract, Watson will be out to prove his doubters wrong, yet again. Despite losing one of the best receivers in the league in DeAndre Hopkins the Texans offense is still packed with talent. New additions Brandin Cooks and David Johnson team up with Kenny Stills and Will Fuller to give Watson plenty of firepower at his disposal. And with his ability to extend the play with his legs or pick up yardage on the ground when a play breaks down, Watson has the ability to take any offense to the next level. If the Chiefs hope to keep this game from turning into a high scoring shoot out, they will need to disrupt the short passes early in the game meant to get Watson in a rhythm and find a way to contain him in the pocket and slow him down as the game progresses.

It’s Week 1 of the new 2020 season, and the Chiefs get to start their title defense playing the very first game of the season. Given the lack of preseason and a motivated Texans team still dealing with blowing a 24-point lead in the playoffs to the Chiefs, it is crucial for Kansas City to impose their will on Houston and set the tone for the game and for this season early on their way to running it back to another championship.